Google’s parent arm Alphabet (GOOGL) saw its stock price decreasing above 7% in the post-market trading after the company failed to meet analyst estimates. The first quarter results were impacted by $1.7 billion fine and lower advertising revenues compared to last quarter.

The holding company already reported earlier this month that it will record a $1.7 billion fine imposed by European regulators on Google for unfair trade practices. As expected, the company’s profit was impacted by the one-time fine. 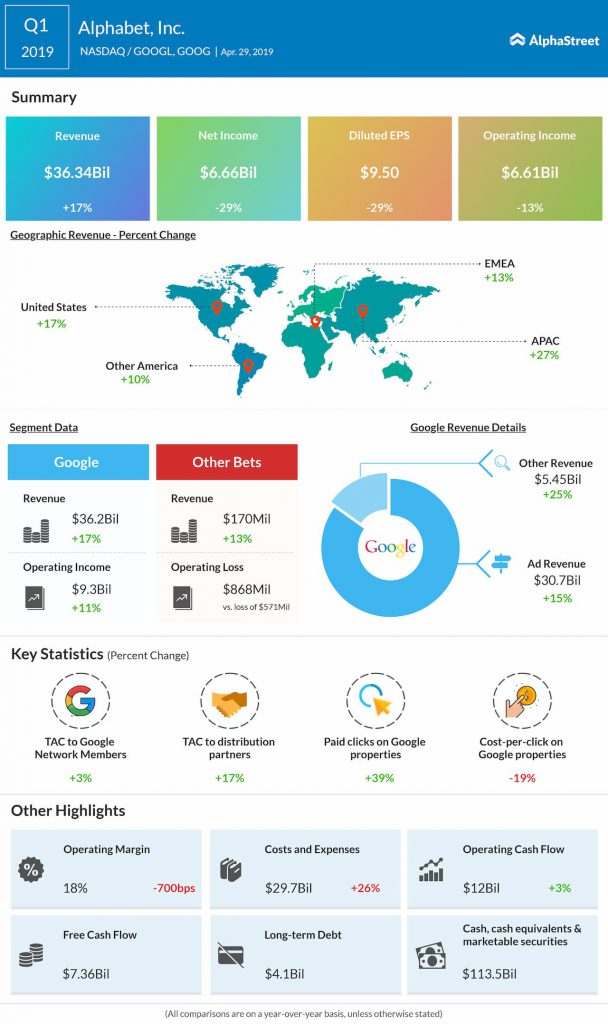 Alphabet’s (GOOGL) shares have increased 23% this year recovering sharply from the 52-week low price of $977.66 in December last week. It’s worth noting that the stock price was impacted by $5 billion fine from the European regulators and has been facing data security issues like its peers in the US. There is increased pressure in the US asking for strict regulations against tech firms post the Facebook’s (FB) Cambridge Analytics data scandal.

It’s no-brainer that Alphabet’s money spinner has been the contribution from Google’s ad revenues. Last year, 85% of revenue came from advertising. Google has been able to grow the ad revenues during the past two years. However, it’s imperative for the firm to diversify its revenue base and look beyond advertising to bring in stable revenues in the long-term. 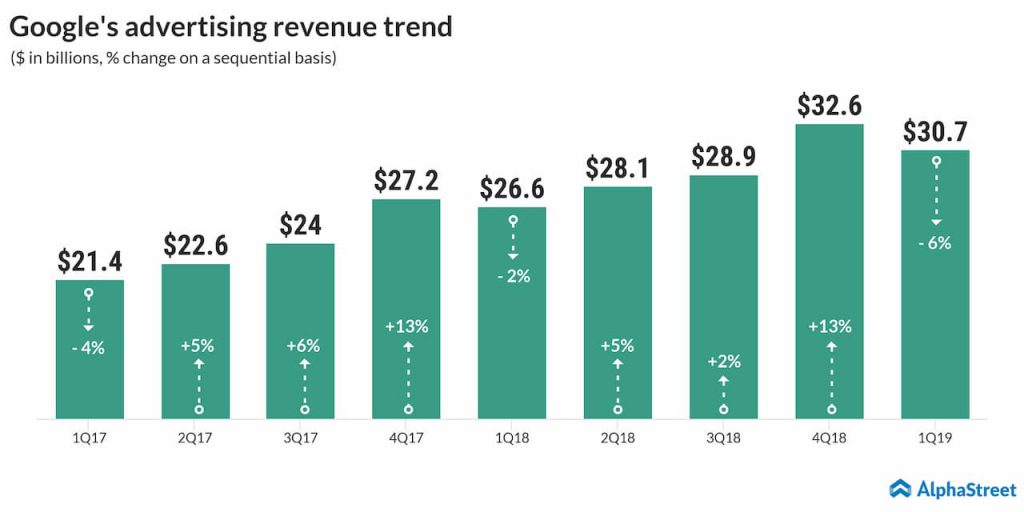 Google’s ad revenues improved 15% to $30.7 billion over last year. However, the ad revenues decreased sequentially by $1.9 billion which impacted the top line. This is the first time since Q1 2018 the search giant is reporting sequential decrease in ad revenues.

It’s important to note that paid clicks grew 39% on Google properties over last year. However, this is a far cry from 66% growth the company reported last quarter. The sequential decline in paid clicks growth shows that the search giant was not able to ramp up traffic to offset the drop in ad prices.

Google has been focusing on improving non-ad revenue part of the business. The company’s Other Revenues segment, which comprises of Google Cloud, Google Play and hardware sales, spiked 25% to $5.45 billion.

Last quarter, this segment saw revenue growth of 31%. Investors would be hoping the search giant to ramp up the non-ad part of the business in the upcoming quarter and expect the segment to record double-digit revenue growth.

Google has been focusing on ramping up its cloud business as it has huge potential to grow the revenue multi-fold considering its market share in the cloud space compared to its peers Amazon (AMZN) and Microsoft (MSFT).

In February, it acquired data-transfer start-up Alooma which helps firms to migrate from enterprise database to cloud-based database. Google is also planning to ramp up its sales team for its cloud offering and look for tuck-in deals which would augment its cloud services business which would help it to close the gap with its nimble rivals Microsoft Azure and Amazon AWS.

Last month, the search giant also announced its foray into the gaming space by launching game streaming platform called Stadia at the Game Developers Conference. The company also added that Stadia will be powered by AMD’s graphic processors.

Revenue improved 13% in the Other Bets division to $170 million and operating loss reduced to $868 million compared to $571 million reported last year. The increase in top line was primarily driven by revenue contribution from Access internet and TV services and Verily licensing and R&D services.

Google’s capex saw a sharp drop of 41% to $4.5 billion over last year. Last quarter, capex stood at $6.8 billion. The search giant has been investing heavily in cloud segment and ramping up its infrastructure and office facilities last year. It seems the company has reduced the spending levels this year. Hence, free cash flow for Alphabet increased to $7.36 billion compared to $5.9 billion reported prior year.