AVGO Stock: Why you need to keep an eye on Broadcom

When the pandemic triggered a new wave of digital transformation, Broadcom, Inc. (NASDAQ: AVGO) was already moving in the fast lane aided by its diversified product portfolio and strong chip demand.

But investors did not spare the chipmaker when most tech stocks took a beating from an industry-wide selloff this year. After hitting a new high in the final weeks of 2021, AVGO entered a downward spiral but all along traded above its long-term average. The current weakness looks temporary because the tech firm’s long-term prospects are bright.

Since a rebound from the current lows is inevitable, it makes sense to buy the stock now. The valuation is favorable and the stock has become affordable to price-conscious investors looking for an entry point. Experts overwhelmingly recommend buying AVGO, which according to them would rise close to the $700-mark this year. Interestingly, the valuation appeared cheap evet at its peak, based on the recent earnings performance.

The management is following an aggressive capital return program, thanks to the healthy balance sheet and steady improvement in cash flow. Having hiked dividends consistently over the years, AVGO remains one of the highest dividend-paying stocks. The company also repurchased shares worth $3 billion in the most recent quarter. 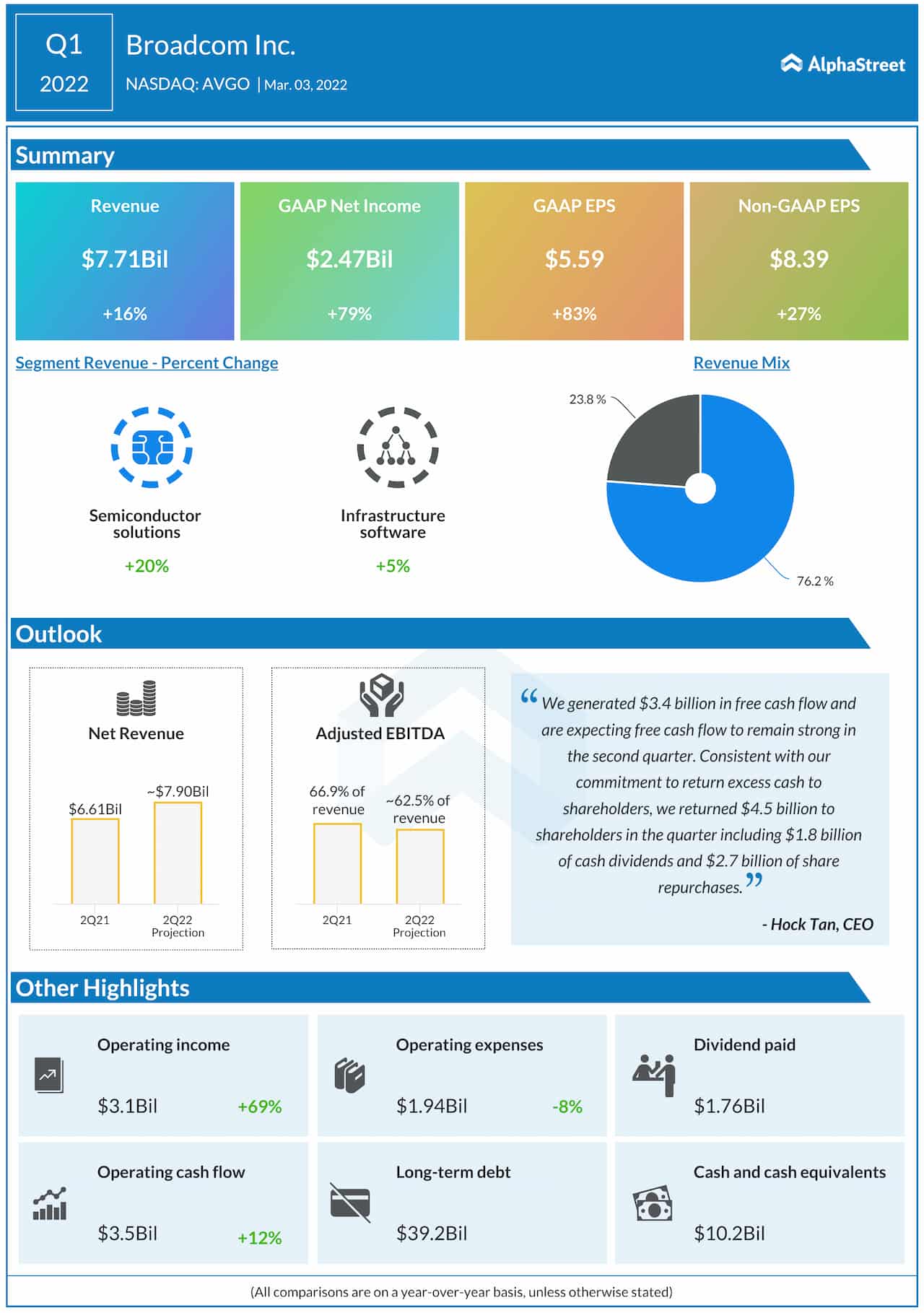 Going forward, the business will continue to benefit from strong technology spending, especially in cloud. As the COVID situation moderates, demand conditions keep improving — the smartphone market booms and cloud adoption accelerates. Broadcom is also well-positioned to tap into emerging opportunities in the broadband and networking markets.

“Enterprise demand — spending is the strongest driver that we’re seeing today. And it should be no surprise because that’s something we’ve said since last quarter and the quarter before. Enterprise has recovered, more than recovered, it’s going — it’s on fire, is the best way to describe. Enterprise spending on IT is, as we perceive it, on fire. And we are seeing a big part of that. And that’s not to say that hyper-cloud and telcos are not adding to it but not as strong as enterprise recovery,” said Broadcom’s CEO Hock Tan.

Being a fabless chipmaker, Broadcom is more vulnerable to supply chain issues than integrated device manufacturers. The business might get impacted by potential production disruption at third-party foundries that serve as the company’s production facilities. That puts Broadcom at a disadvantageous position when it comes to effectively dealing with the chip shortage.

In the first quarter, revenues and earnings increased in double digits to $7.71 billion and $8.39 per share respectively even as both the business segments registered growth. Encouraged by the positive outcome, the management is projecting second-quarter revenues at $7.9 billion, which is above expectations. The latest numbers also came in above the market’s forecast, continuing the recent trend.

Shares of Broadcom have lost about13% so far this year and underperformed the S&P 500 index. The stock traded sharply higher on Friday afternoon after closing the previous session lower.