In the fourth quarter, adjusted earnings decreased to $1.09 per share despite a 3% growth in revenues

Intel Corporation (NASDAQ: INTC) has been on an aggressive expansion drive to strengthen its foothold in the semiconductor industry. The chipmaker’s recent performance indicates it has effectively tackled competition through innovation and maintained its dominance in the market. The stronger-than-expected fourth-quarter results reflect the company’s resilience to the supply chain crisis, though the earnings drop and weakness in the core Client Computing business could be a concern for stakeholders.

Intel’s stock declined soon after the announcement, but recovered briefly in the afterhours on Wednesday. The weakness persisted on Thursday and the stock traded lower in the early hours. Going forward, margins are expected to remain under pressure since the management is pursuing an expansion program – development of production hub with multiple fabs and portfolio expansion – that demands heavy investment.

The strain on the bottom-line would affect shareholders returns, so it would be a good idea to put investment plans on hold for now and keep and eye on the stock. While the near-term prospects don’t look very encouraging, Intel will not disappoint those looking for long-term holding.

Continuing the focus on portfolio expansion, Intel is all set to introduce its new server chip Saphirre Rapids that is expected to start shipping in the current quarter. The company has broken ground on two fabs in Arizona as part of its growth plan, in what could be one of the biggest capacity expansion drive that would cost around $20 billion. 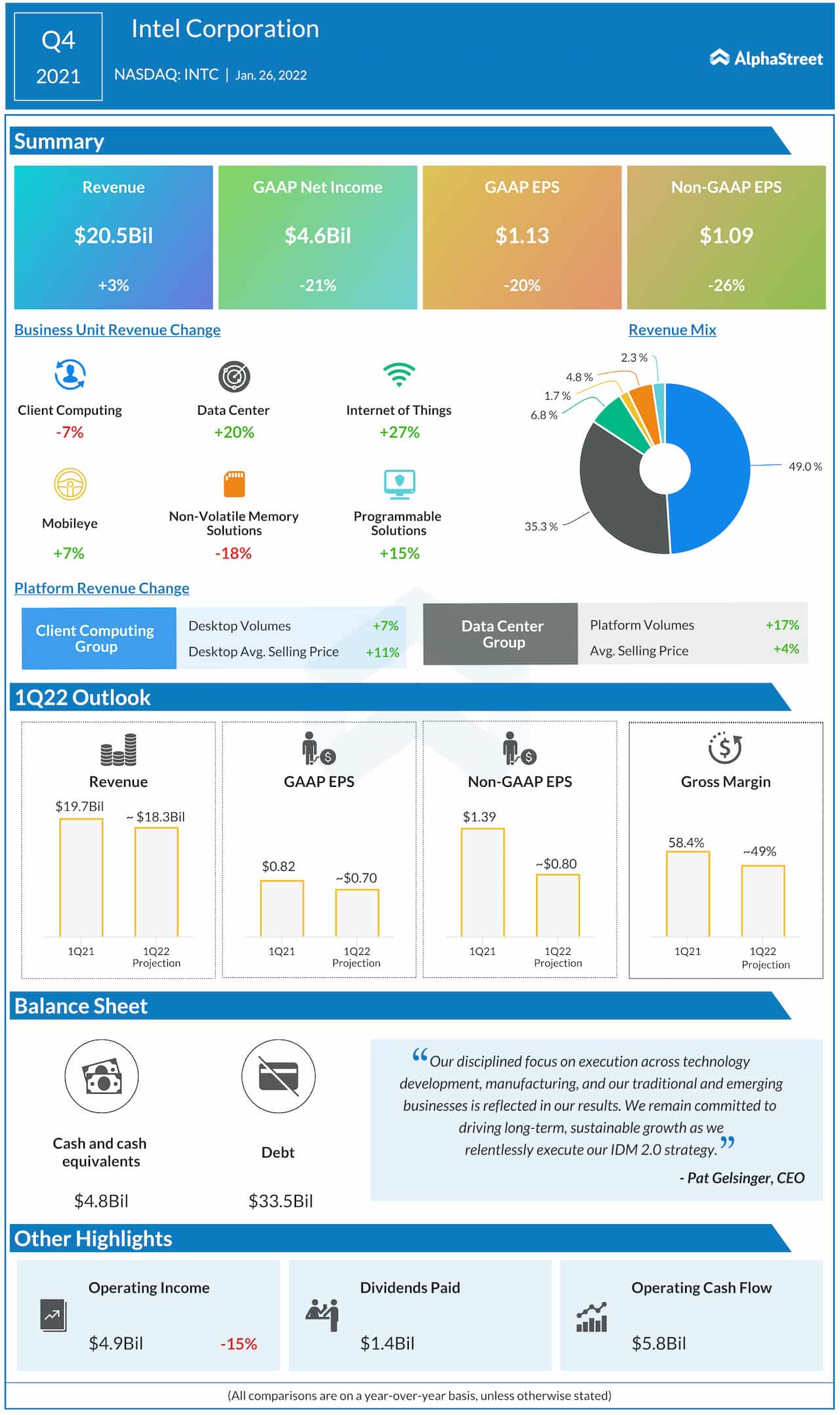 “We are leading the transformation of the network, where our Xeon and FlexRAN software are used in almost all vRAN commercial deployments. We are driving AI inferencing adoption at the edge with our OpenVINO software on partners like BMW Group and Samsung in the factory and medical environments and we are extending the IPU ecosystem and accelerating the creation of fully programmable network by collaborating on new FPGA based IPU solutions with Inspur, Ruijie networks and Silicon,” said Patrick Gelsinger, chief executive officer of Intel, during his post-earnings interaction with analysts.

In the fourth quarter, main operating segments except Client Computing performed well, mostly surpassing analysts’ prediction. A 7% decline in client computing revenues took the sheen off the positive top-line, which grew 3% annually to $20.5 billion. The management’s sales outlook for the first quarter indicates a sequential dip, but it is above the consensus forecast.

There has been a notable uptick in PC sales during the pandemic, with the widespread digital adoption and shift to remote work boosting demand. Though volumes tend to fluctuate between quarters, demand will remain strong in the near future. However, the persistent chip shortage and logistics issues could be a hassle for fulfilling orders.

Interestingly, Intel’s self-driving technology division Mobileye maintained the uptrend, as it did in the trailing quarters, justifying the management’s decision to take the business public later this year.