The widespread digital adoption triggered by the virus-induced shutdown has had a mixed effect on technology companies. While creating new opportunities for the semiconductor industry by driving up chip demand, digital transformation also left many companies struggling to fulfill sales orders. The mixed third-quarter results of Intel Corporation (NASDAQ: INTC) underscores the dilemma facing the microprocessor industry.

The Silicon Valley-headquartered tech firm has been striving had to maintain market share as it lagged behind competitors due to a lack of innovation and obsolete technology. In a significant move aimed at rejuvenating the business, the management has unveiled a massive turnaround plan, spanning many years and involving heavy capital spending.

The lackluster performance of Intel’s stock is indicative of the weakening investor sentiment. After slipping to a multiyear low early last year, however, INTC made an impressive recovery and entered 2021 on an upbeat note. But it failed to sustain the momentum and soon entered a downward spiral.

The stock has become more affordable after the dip, but the question is whether it has the potential to create shareholder value. The company’s strong fundamentals and the revised growth strategy, after the recent leadership change, are the main attractions from an investment perspective.

But it is yet to make tangible progress in executing the roadmap and to catch up with rivals in certain aspects of the business. In the GPU segment, Intel lags behind Nvidia Corporation (NASDAQ: NVDA), while its Rocket Lake CPUs are yet to prove their efficiency vs. AMD’s (NASDAQ: AMD) Ryzen series. In short, those looking for long positions cannot ignore INTC, but short-term investors might be disappointed. Analysts see a further dip in value in the coming months. 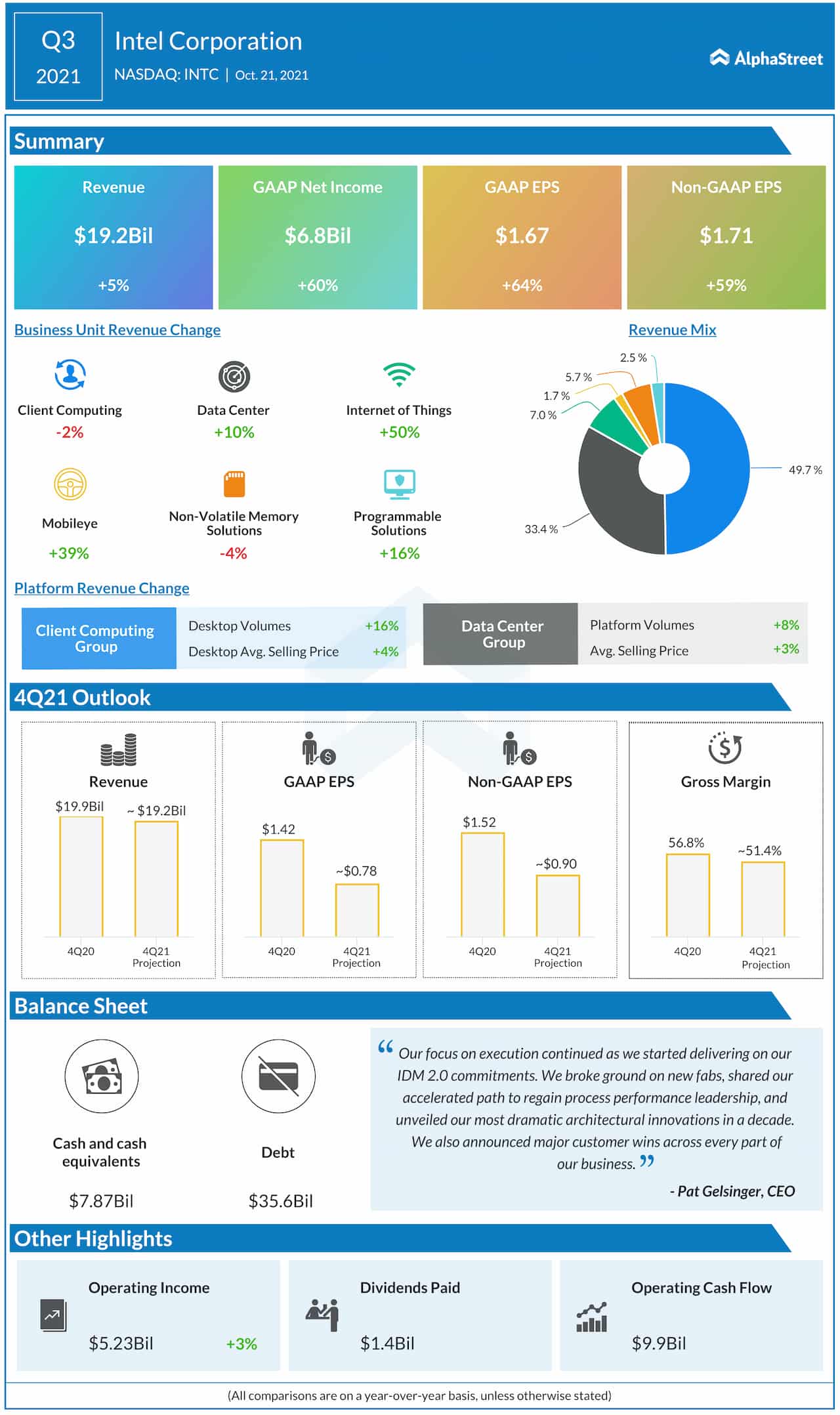 Despite the nearly stagnant sales, the company’s bottom-line performance has been impressive over the years, with earnings constantly beating the estimates. But, the growth initiatives, including capacity addition and construction of new fabs, will weigh on margins going forward.  The focus of the IDM 2.0 strategy is on positioning the company to compete effectively in the market and meet the growing semiconductor demand through world-class foundry capabilities and product innovation.

Customers continue to choose Intel for their data-center needs and our third-gen scalable Xeon processor Ice Lake has shipped over 1 million units since launching in April, and we expect to ship over 1 million units again in Q4 alone. All of our OEMs are currently shipping systems, and we expect all our major cloud customers to have announced instances by the end of the year.

In the third quarter, weakness in the core Client Computing business was more than offset by growth in other segments, mainly a 10% increase in data center revenues. Total revenues moved up 5% to slightly above $19 billion and adjusted earnings jumped 59% to $1.71 per share. Meanwhile, the management issued a cautious outlook, indicating a decline in fourth-quarter revenues and earnings.

Intel’s stock traded down 10% in the early hours of Friday, reversing most of its post-earnings gains in the previous session. The shares have lost about 20% in the past six months and mostly traded below the 52-week average.