Microsoft Corp. (NASDAQ: MSFT) is one of the most innovative technology companies, constantly transforming the business to align with the rapidly changing digital economy. While aggressively participating in the digital transformation drive, the company is also pursuing strategic deals like the recently announced acquisition of Activision Blizzard.

The company this week reported broad-based revenue growth for the second quarter that translated into a marked increase in net profit. However, the stronger-than-expected results failed to impress the market and the company’s stock dropped following the announcement. But it regained strength after the management issued sales guidance that exceeded estimates.

The current valuation is favorable for investors but the stock is likely to become more expensive in the coming weeks, considering the upbeat sentiment that followed the Activision deal. So, it makes sense to tap into the unique opportunity and own the stock. Also, the company has an impressive capital return program that keeps improving. Experts’ bullish outlook points to a 25% gain this year.

Besides boosting Microsoft’s gaming business, the buyout deal positions it to become a key player in the rapidly expanding metaverse market, leveraging its proprietary technology and industry-leading resources. Going forward, the company is poised to gain significantly from the steady expansion of digital economy globally. It needs to be noted that currently the most promising business segment is the Azure cloud service, which accounts for more than a third of total revenues, according to latest data. 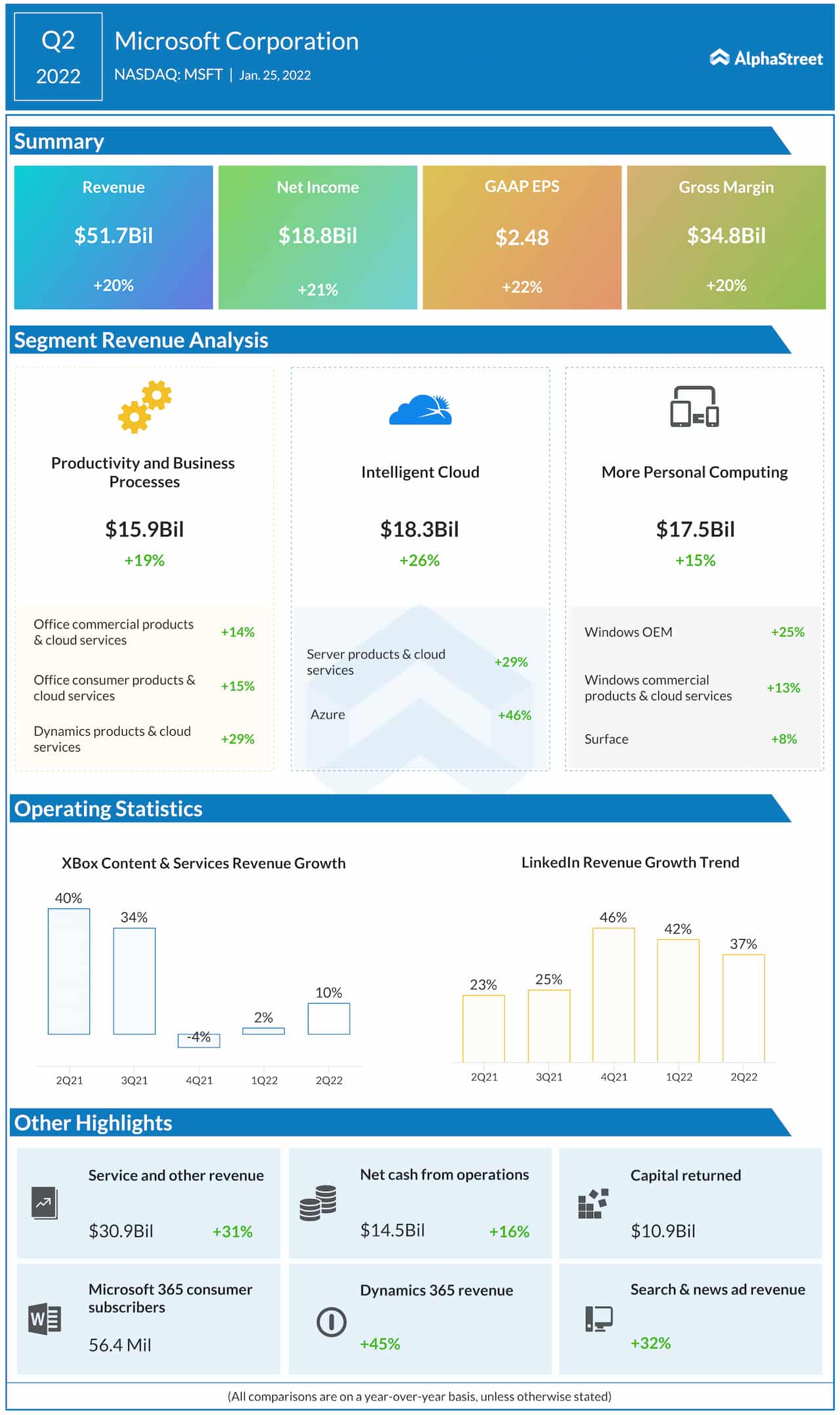 In the second quarter of 2022, all operating segments registered strong growth, driving up revenues by 20% to $51.7 billion. The top-line also surpassed the consensus estimates. Consequently, earnings increased 21% annually to $18.8 billion or $2.48 per share and topped Wall Street’s expectations.

“We expect COGS of $15.5 billion to $15.7 billion and operating expense of $13.4 billion to $13.5 billion, driven by headcount investments in high-growth, strategic areas to drive continued long-term revenue growth. In other income and expense, interest income and expense should offset each other. As a reminder, we are required to recognize mark-to-market gains or losses on our equity portfolio. And we expect our Q3 effective tax rate to be approximately 18%, slightly higher than our full year expected tax rate of approximately 17%.”

In what is seen as a major milestone for the business, Microsoft last week acquired gaming behemoth Activision Blizzard Inc. (NASDAQ: ATVI) for a whopping $68.7 billion. More than the value, the deal is significant because it allows Microsoft to own some of the biggest gaming franchises that would add value to the Xbox brand.

Meanwhile, there is speculation that a part of Microsoft’s recent growth was driven by the acceleration in the adoption of digital technology during the pandemic, which according to some experts might not be sustainable. The lackluster stock performance can be attributed to those concerns to some extent.

Microsoft’s shares have become affordable after their withdrawal from last year’s peak. The stock, which has lost about 9% so far this year, traded sharply higher in early trading on Wednesday.