Bed Bath & Beyond’s (NASDAQ: BBBY) Q2 earnings surpassed analysts’ estimates, while sales fell short of the expectations. The home goods retailer posted adjusted earnings of $0.34 per share on sales of $2.72 billion for the second quarter of 2019. Wall Street had projected the company to post earnings of $0.29 per share on revenue of $2.75 billion. BBBY stock was down about 1% at 5:00 PM ET.

It was expected that the company would annouce about the appointment of a new CEO. However, BBB stated that it remains on track with its expectation of making an announcement soon regarding a permanent CEO. The troubling retailer’s stock continued its dismal performance during today’s regular trading session and ended down 2.91% at $10.02. 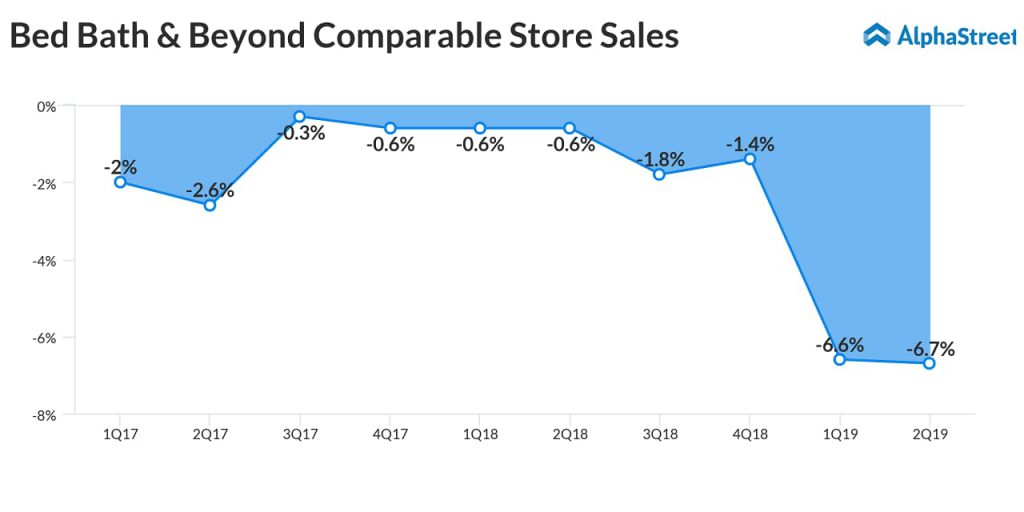 On a GAAP basis, BBB reported a loss of $1.12 per share for the second quarter, which included an unfavorable impact of approximately $1.46 per share from charges related to the first wave of transformation initiatives including, severance costs associated with the corporate workforce reduction and decision to outsource certain functions, and an inventory write down. Comparable sales declined approximately 6.7%.

Bed Bath & Beyond updated its fiscal 2019 outlook. The company now expects EPS to be between $2.08 and $2.13. Full-year sales is now projected to be around $11.4 billion. When the New Jersey-based retailer reported first quarter results, it had modeled the FY19 outlook to be at the lower end of its previously provided ranges of $2.11 to $2.20 for earnings per share and $11.4 billion to $11.7 billion for sales.

As part of the cost savings initiative, BBB reduced its corporate workforce by about 7% in July and eliminated the role of Chief Operating Officer recently.