Beyond Meat (BYND) loses its charm ahead of Q3 earnings

When Beyond Meat (NASDAQ: BYND) publishes its third quarter 2019 earnings results on October 28, Monday after the market closes, the consensus calls for the company to report earnings of $0.03 per share on revenue of $82.23 million.

After its IPO in May, the plant-based meat producer’s stock skyrocketed till July 26 ($239.71), a whopping rise of more than 850% from its IPO price of $25. However, the bubble started to burst after the company reported second quarter earnings on July 29. Beyond Meat shares fell below the $200 mark the next day. BYND stock continued to deteriorate further and tanked to a double-digit mark ($97.90) this Wednesday. 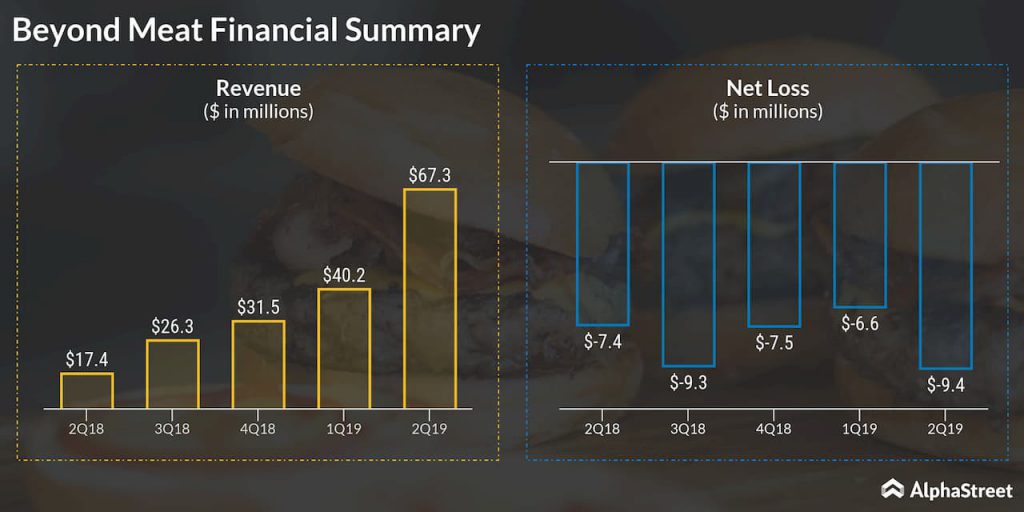 For the second quarter ended June 29, 2019, Beyond Meat topped the revenue estimates, while it failed to meet the bottom line targets. The company lifted its guidance for fiscal 2019. Shares of Beyond Meat tumbled the next day registering a decline of 12%, mainly hurt by the company’s announcement about the underwritten public offering of its 3.25 million shares.

Beyond Meat had projected the fiscal year 2019 revenue to exceed $240 million versus the prior outlook of exceeding $210 million, which represents a surge of 170% compared to 2018. Adjusted EBITDA is predicted to be positive compared to prior expectations of break-even adjusted EBITDA.

The market believes that Beyond Meat is overvalued. The mounting competition from other food companies including Impossible Foods, Tyson Foods and Hormel Foods also is a headwind for Beyond Meat. Even though Beyond Meat’s revenue has been growing quarter-over-quarter, the company has to start making profit to gain investors’ confidence.

The number of restaurants and food service establishments who add plant-based meat products in their menus continues to rise day-by-day. The El Segundo, California-based company has joined hands with these companies to increase the availability of its products.

Beyond Meat believes that the environmental concerns on growing meat for food and the increasing number of vegans and vegetarians will benefit the company. However, nutritions are doubtful about the nutrients available in plant-based meat products.