Biogen Inc. (NASDAQ: BIIB) is currently going through a difficult phase as the biotechnology firm’s main products face stiff competition and the ambitious launch of its Alzheimer’s drug turns into a disaster. The setback has prompted the company to replace its chief executive officer who presided over the regulatory approval and launch of Aduhlem.

Recently, the Cambridge-based company’s stock slipped below the $200-mark after a long gap and is yet to recover from the multi-year lows. While the low valuation makes it an attractive bet, the current issues call for caution. But BIIB has what it takes to create decent shareholder value over the long term. Experts predict a 17% gain in the next twelve months, citing the company’s strong fundamentals and balance sheet.

Of late, investor sentiment has been hit by controversies surrounding aducanumab, marketed as Aduhelm, with the latest being the withdrawal of marketing-authorization application with European regulators. Though the stock experienced weakness as the problem deepened, it has remained surprisingly stable this year. Earlier, approval of the drug by the FDA had drawn criticism due to concerns that the data evaluated for the sanction was not valid.

Aduhelm, which was launched last year with high expectations – the first new treatment for Alzheimer’s after almost two decades – failed to make an impact as questions were raised about its effectiveness. The troubles that followed the botched launch have made the management stop marketing the drug and reduce spending significantly. Michel Vounatsos, Biogen’s CEO, will be stepping down soon. He has been leading the company since 2016. 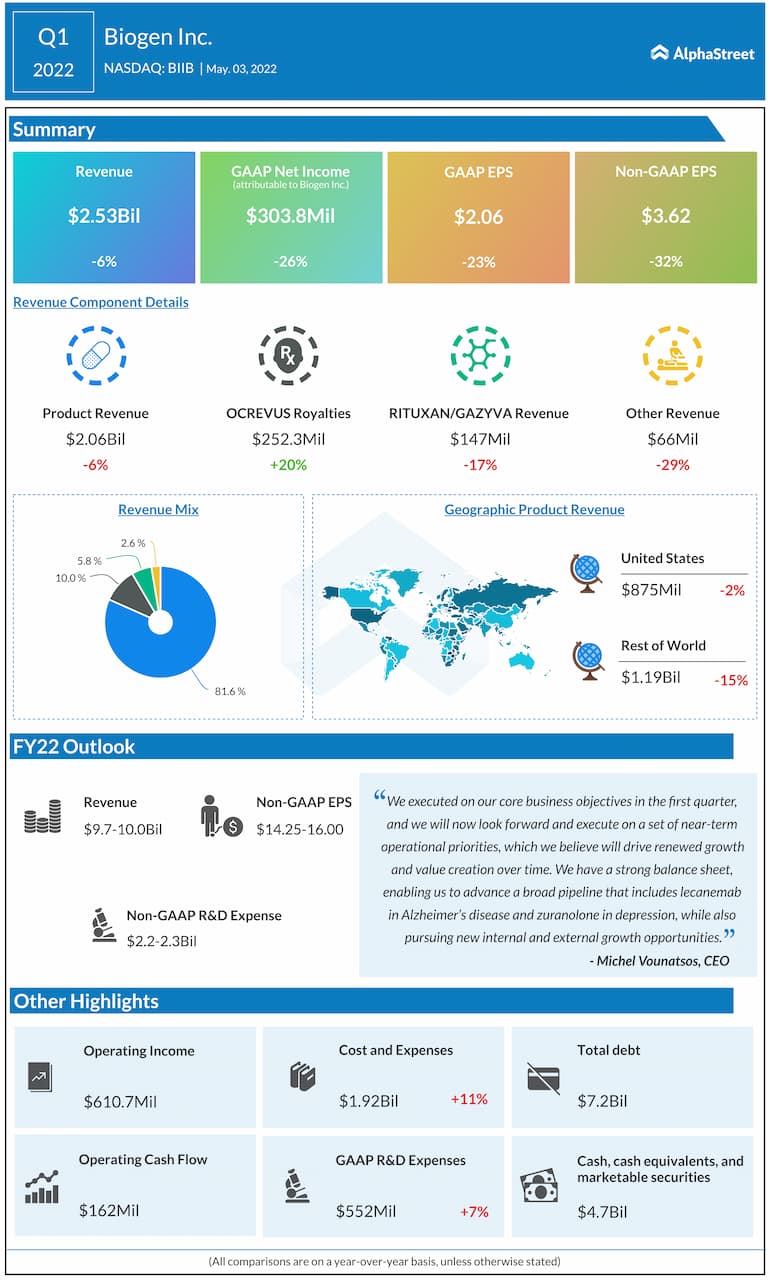 Going forward, the strong cash flows – free cash flows stood near $3 billion consistently in the past four years — should come in handy for advancing the pipeline. That, supported by a robust profit margin, gives the company enough leeway to invest in the pipeline and open new revenue streams. Currently, it has a number of late-stage clinical trials progressing. That said, the present uncertainties are expected to linger for quite some time, all along dragging Biogen’s financial performance. Also, the company is not immune to macroeconomic issues and pandemic-related disruption.

Biogen’s profit for the first quarter of 2022 missed analysts’ forecast, like in the previous quarter. However, revenues came in above the estimates. Earnings dropped 32% annually to $3.62 per share, reflecting a 6% decrease in revenues to $2.53 billion amid weak sales across all key markets. The bottom line was negatively impacted by inventory write-offs related to Aduhelm.

“Our focus in 2022 will remain on execution and agility as we expect a number of important milestones. This includes the continued launch of ADUHELM in the US, the launch of VUMERITY in the EU, and our expected entry into the US biosimilars market with BYOOVIZ. We expect five data readouts, three of which are in Phase 3, and the completion of three regulatory filings in Alzheimer’s disease, depression, and biosimilars,” said Michel Vounatsos during his post-earnings conference call.

Stock Watch: Should you invest in Eli Lilly (LLY) after Q1 earnings?

Biogen’s shares experienced significant fluctuation in recent months and mostly underperformed the market. In the past six months, they lost about 26%.