Earnings, excluding items, jumped to $6.05 per share this quarter from last year’s $5.20 per share. On a diluted basis, Biogen reported earnings of $5.54 per share, marking a modest improvement from $3.46 per share during the same quarter last year.

Weeks back, Biogen along with its South Korean partner Samsung Bioepis put an end to the long-running fight with AbbVie, over the biosimilar version of the latter’s key drug Humira. Based on the new deal, the partners will sell the copy-cat version of Humira — Imraldi — in Europe. This is expected to strengthen the firm’s biosimilar portfolio and even drive the revenue growth.

Revenue during the quarter jumped 11% to $3.1 billion, propelled by SPINRAZA (to treat spinal muscular atrophy), which contributed $364 million in global revenues, and biosimilars that contributed $128 million.

The company is focusing on building its neuroscience pipeline. Hence, it paid $1 billion to expand its partnership with Ionis Pharma (IONS) to develop new antisense drugs to treat a wide of neurological disorders. During the quarter, the company even completed the transaction — of approx. $600 million — to acquire an experimental drug from pharma giant Pfizer that is developed to treat Schizophrenia.

“As pioneers in neuroscience, we continued to advance and expand our portfolio of potential breakthrough treatments for areas of high unmet need. We have added a new Phase 2 asset in our emerging growth area of neuropsychiatry, and we meaningfully enhanced our collaboration with Ionis to develop a new pipeline of gene- based therapies for neurological diseases,” said Michel Vounatsos, Biogen’s Chief Executive Officer. 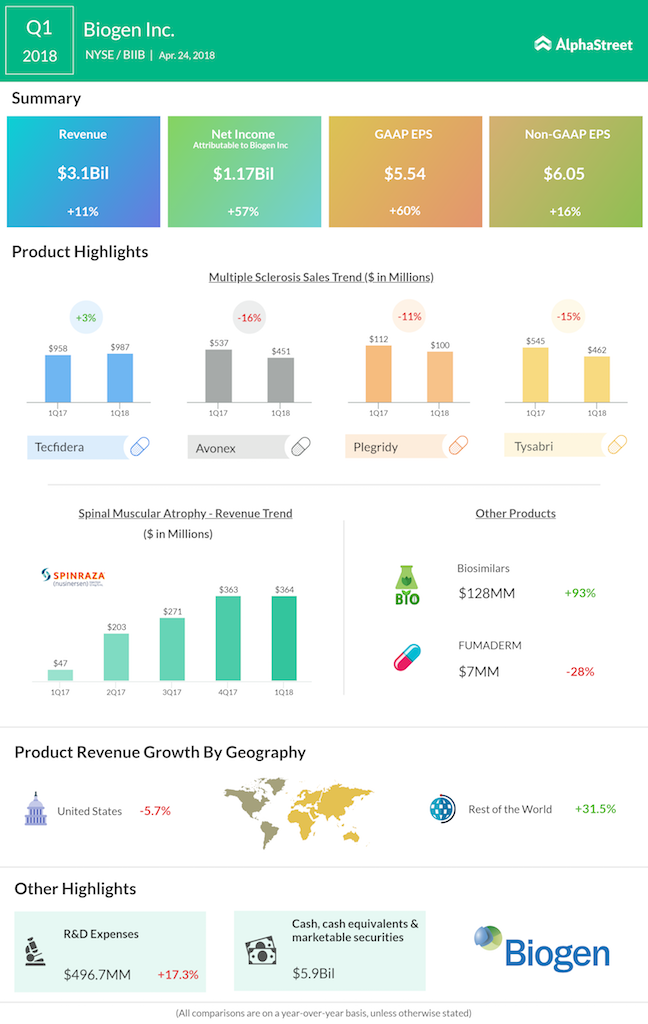