BlackBerry Q4 earnings preview: What you need to know

BlackBerry (BB) is scheduled to report fourth-quarter 2018 earnings on Friday, March 29, before the opening bell. The Canadian phone maker-turned-cybersecurity firm is projected to report earnings of 8 cents per share in Q4, even as revenues are expected to decline by 2.5% to $227.14 million.

The stock has rallied 24% since the beginning of this year, outperforming the industry’s performance of 16% for the same period. In the trailing 52 weeks though, BB has declined 32%.

BlackBerry holds long-term prospects as a cyber-security expert that has been recognized and endorsed by government agencies, including the National Security Agency. Add to that the fact that the cyber-security market is projected to grow from the current $120-billion valuation to $300 billion by 2024.

With cyber threats increasing exponentially on a daily basis, BlackBerry’s relevance is getting bumped up simultaneously.

Earlier this month, the enterprise software and IoT firm announced that it has established a new unit – BlackBerry Government Solutions – with an aim to deepen ties with the US federal government. The new subsidiary would be headquartered in Washington DC and will have a governance structure that is different from its corporate parent, in order to adhere to the requirements of national security.

Investors will be looking for more updates on this new unit during the post-earnings conference call. Separately, investors would also be looking at how the $1.4-billion acquisition of Cylance last year is expected to impact results in the coming quarters.

In the last reported quarter, BlackBerry reported third-quarter results that surpassed analysts’ expectations. Revenue was flat compared to the year-over period at $226 million, but higher than $212.58 million expected by analysts. Adjusted earnings of 5 cents per share were above analysts’ prediction of 2 cents per share. 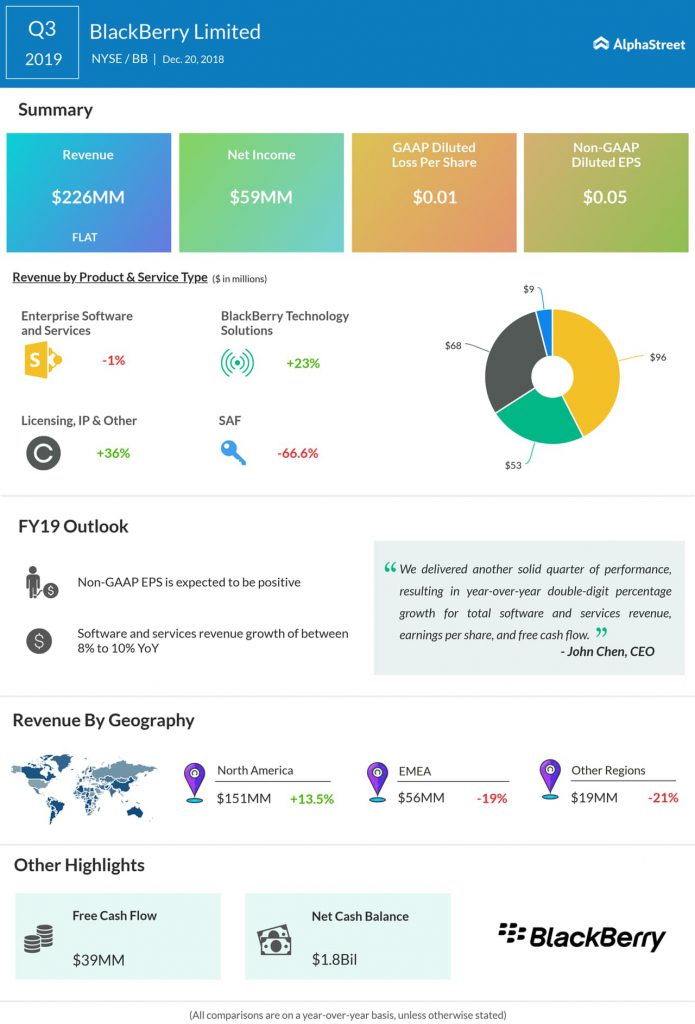