Blend Labs IPO: A look at the pros and cons of investing in $360-mln IPO

For financial service providers, 2020 was a big year as the industry witnessed major changes like the internet banking revolution, thanks to the coronavirus-related social distancing mandates. One of the beneficiaries of the digital shift is Blend Labs, Inc., a Silicon Valley-headquartered fintech start-up focused on online loan facilitation.

The SaaS platform, which acts as an interface between loan aspirants and lenders to facilitate user-friendly mortgages, simplifies the process through its cloud-based banking software. Around $5 billion of mortgages are processed on the platform every day, serving a clientele that represents around 25% of the total US mortgage market. It is designed for multiple banking products including credit cards, home equity, mortgage, personal loans, and vehicle loans.

An official statement Tuesday revealed the management’s intention to take the company public, at a time when the IPO market is witnessing hectic activity. The stock will be listed on the New York Stock Exchange under the ticker symbol BLND in the coming months. It will be offering approximately 20 million common shares for $16-18 per share. The offering is expected to generate proceeds of up to $360 million and value the company at $4 billion. The book runners will be led by Goldman Sachs and Wells Fargo Securities.

Last year, the tech firm increased its employee count to 560 — deployed in the San Francisco and New York offices. Its lending partners include industry leaders like Wells Fargo & Co (NYSE: WFC) and U.S. Bank. The company had 291 customers at the end of 2020, which includes some of the leading financial service providers, asset managers, and non-bank mortgage lenders. Full-year revenues jumped about 90% year-over-year to $96 million. Consequently, net loss narrowed to $74.6 million from $81.5 million in fiscal 2019. 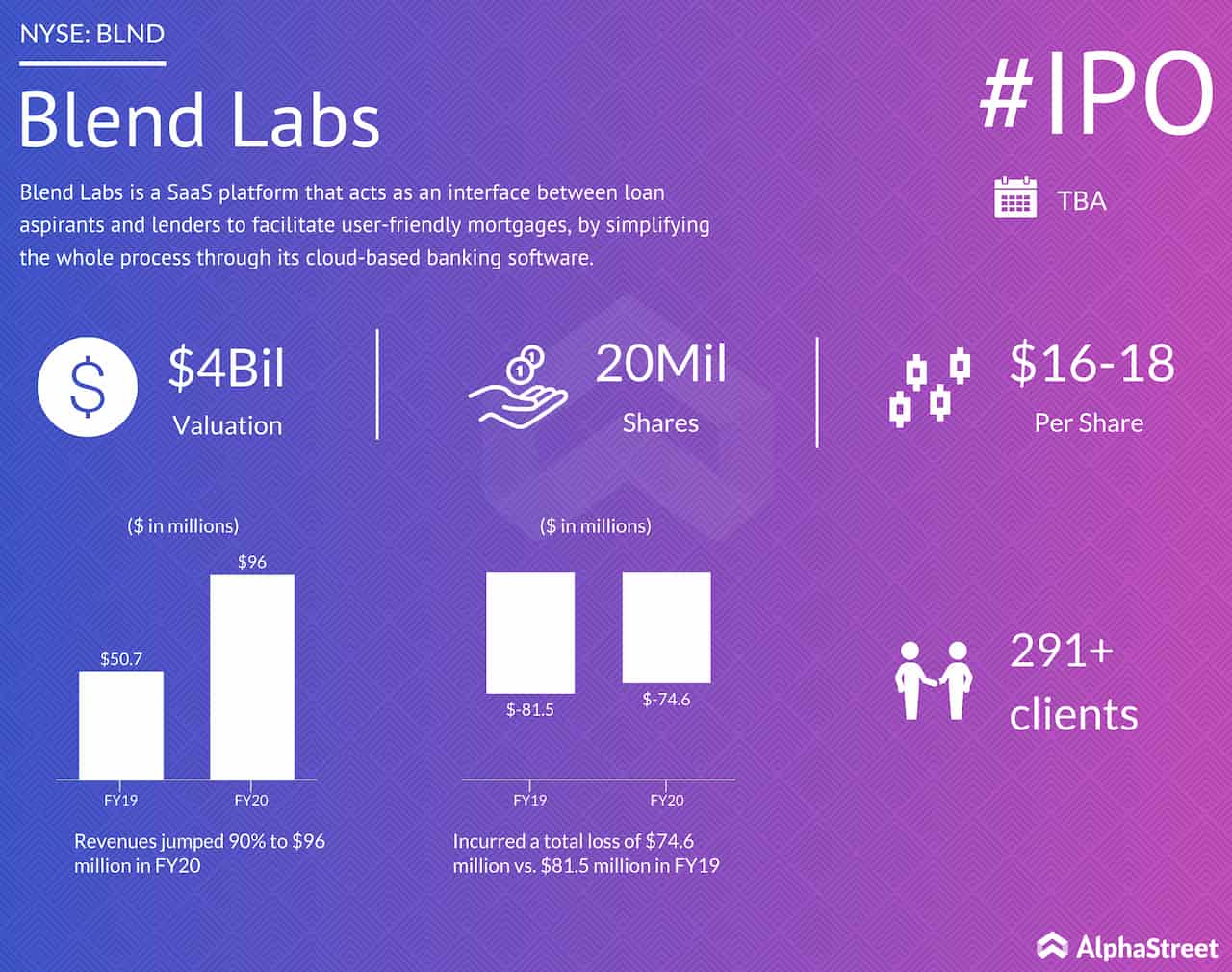 The company is set to foray into the other segments of retail banking by expanding its modular software platform to areas like creation/deployment of new product offerings. The expansion program assumes significance considering the technological innovation that is setting a new paradigm for the banking industry.

The company is positioning itself for next-generation banking, betting on the scope for future-proof software architecture needed for delivering personalized consumer experience across all businesses. The mobile-first strategy helps Blend attract customers, especially youngsters and professionals, by reducing loan origination costs and saving time. Total spending on software in the banking industry was $72.4 billion in 2020, which is expected to grow about13% through 2025.

IPO: Will Duolingo live up to the market’s expectations?

Blend Labs was founded in 2012 by Eugene Marinelli, Erin Collard, and Nima Ghamsari, who has served as its chief executive officer since then. It is estimated to have facilitated $1.4 trillion in consumer loans and mortgage lending in 2020 while expanding the digital customer platform significantly. In January, the company raised around $300 million in a stock offering and hit a valuation of $3.3 billion, after raising $75 million a few months ago.