Canopy Growth (TSX: WEED, NYSE: CGC) is scheduled to release its financial results for the fourth fiscal quarter of 2019 after the market closes on Thursday, June 20, 2019. The Ontario, Canada-based cannabis company missed the estimates for three quarters in a row so far this year and this trend is likely to continue for the short-term due to an increase in the costs and expenses associated with the company’s investment in cannabis harvest.

Canopy Growth has expanded to new markets including the UK and Peru and announced intention to establish operations in New York State, marking the company’s entry into the US hemp market. The company entered into extraction supply related agreements with Valens GroWorks, Medipharm Labs, and POS Holdings for supplying the significant quantities of cannabis oil. The company expects cannabis oil will be required to meet the needs of future value-added products including vape pens and beverages.

The company is in the final stages of completing its Canadian production and extraction platform. Canopy Growth expects gross margins to expand in the coming quarters when all of its cultivation facilities reach full utilization and cycle through initial pilot harvests to be high performing assets. Also, margins are expected to expand when edibles and beverages are introduced later in calendar 2019 with lower costs of active ingredients per serving. 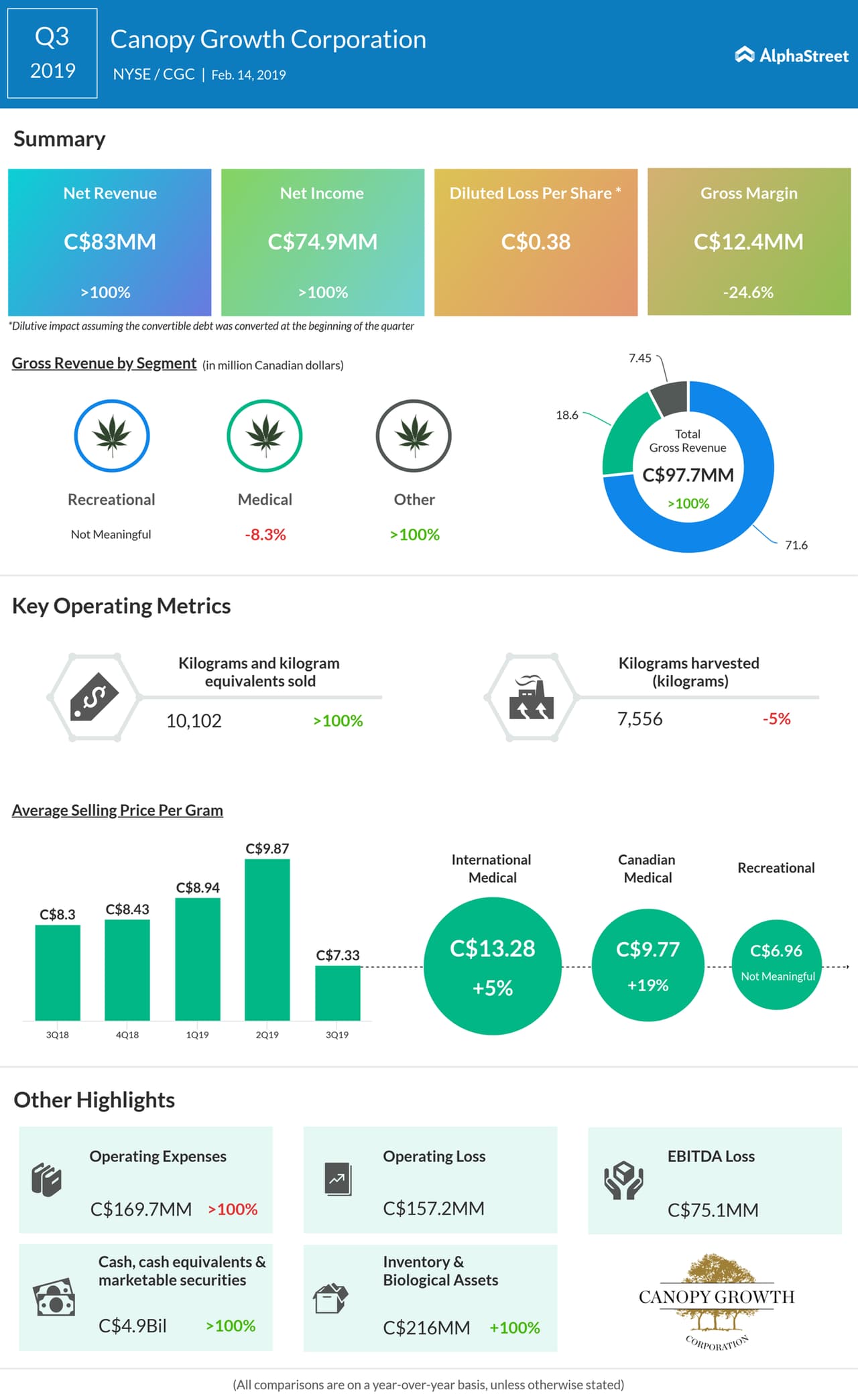 Subsequent to the end of the quarter, Canopy Health Innovations has begun phase 2b “in-human” clinical trials to evaluate the use of medical cannabis in the treatment of insomnia. The trials are being conducted in collaboration with a leading Canadian research institution. The company purchased the assets, including over 40 cannabis-related patent applications of Colorado-based hemp researcher, ebbu.

During mid-May, the company appointed Mike Lee to its executive leadership team in the acting role of Chief Financial Officer (CFO), effective June 1, 2019. Mike’s permanent role as CFO will commence upon receiving Health Canada security clearance required for all Officers and Directors. Tim Saunders, who decided to retire as CFO, will continue to serve as a strategic advisor in areas of mergers and acquisitions, corporate financing, and business transformation.

For the fourth quarter, the company is expected to post a narrower loss due to the expenses leverage as well as its ability to generate strong top line, which the analysts expect to soar by 335%. The Canadian recreational cannabis market will be dominated in the long term by businesses delivering excellent products and consumer experiences.

https://www.youtube.com/watch?v=KqNZ-_X4F8k&t=2s Cannabis company Tilray, Inc. (NASDAQ: TLRY) Monday reported a wider net loss for the second quarter of 2020, despite a marked increase in revenues. Revenues of the Canada-based company