Celgene – a sweet or sour pill?

It’s no big secret that investment in biotech stocks can offer great returns for investors, and at the same time do some serious damage also. Some of these companies not only tackle serious issues like cancer but also prove to be life-savers in an investor’s portfolio.

Despite the high risks involved in this sector, Celgene (CELG) has been one stable company. Despite the rough journey it had last year due to the failure of one of its key experiment drug, FDA’s refusal of reviewing its multiple sclerosis drug last month, and its disappointing long-term outlook, the company is confident of bouncing back. The company expects profits for this year to be around three times more than what they were in 2014.

Let’s find out what is in stock for Celgene in the future.

The growth story continues to be strong at Celgene. The company’s key product Revlimid has been one of the main growth factors. In the recent fourth quarter, Celgene’s Revlimid generated revenues of $2.19 billion, a 21% growth on a year-over-year basis. Revlimid’s revenue in the US came in at $1.47 billion, up 24% and revenues from the international market rose 15% to $715 million.

Even the introduction of new drugs failed to perform well when compared to Revlimid. In fact, they needed to be combined with Celgene’s blockbuster drugs Pomalyst – that is used to treat multiple myeloma – or Revlimid. Though other rivals are hoping to soon introduce their version of generic drugs, Celgene will still rule as it has over 30 patents that are sufficient to fend off rivals.

What’s interesting is that Celgene has a strong pipeline. Celgene’s failure of its late-stage drug for treating Crohn’s disease has definitely disappointed investors. But that experimental drug was just one of the multiple candidates that the company has in its pipeline. These drug candidates in the pipeline could be a huge blockbuster for the company.

Also, Celgene expects its partnerships and acquisitions to pay off in the near future. The company signed a deal with BeiGene last year for tumor cancer treatment and granted BeiGene the rights to market its drugs in China for the next ten years.

Celgene’s collaboration with Agios proved to be profitable due to FDA’s approval of leukemia drug Idhifa. This boosted the company to make similar collaborations with several drug makers. A few of the partnerships include bluebird bio (BLUE), Acceleron Pharma (XLRN) and Jounce Therapeutics (JNCE). Not to forget Juno Therapeutics (JUNO) deal that will boost Celgene’s cancer pipeline.

Celgene displays a potential to strike more deals in the future. All this makes Celgene a strong stock to own. 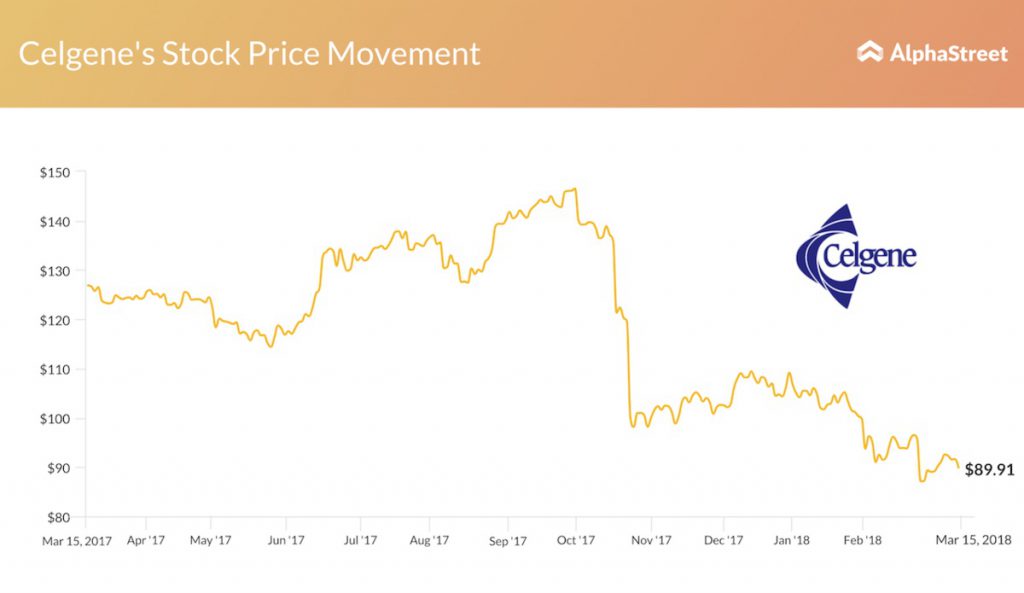 Revlimid, which is the top contributor to the company’s revenue, surprisingly turns out to be the biggest problem for the company. This is because Revlimid may face generic competition in the year 2022 and the company might find it challenging to find a suitable replacement.

Plus, investors lost their confidence in the company after its big pipeline setback – a failure of Crohn’s disease drug. This failure was a big blow for the company last year as it was reported that the company lost over $10 billion in market cap overnight. Last month, FDA refused to review the application for multiple sclerosis drug Ozanimod. To offset these losses, the company is making huge investments in R&D, with mixed outcomes.

Also, President Trump has been repeatedly mentioning about the high pricing of drugs from the time he started campaigning. He had assured that bringing down the drug prices in the U.S. is one of his top priorities. This threat adds woes to the already suffering major U.S. pharma companies, including Celgene.

Celgene’s shares closed at $89.91 (52-week low $86.55) yesterday. The company has many growth drivers under its wing. Even with the remaining risks, some analysts predict that the worst is over for the once biotech darling.