CrowdStrike (CRWD): Why this cybersecurity stock should be on your watchlist

When the digital shift accelerated during the pandemic amid widespread shutdown, there was a corresponding increase in the need for effective solutions to secure IT systems. Naturally, cybersecurity firms like CrowdStrike Holdings, Inc. (NASDAQ: CRWD) witnessed a spike in demand, a trend that is expected to gather further momentum.

Earlier this week, CrowdStrike’s stronger-than-expected second-quarter results failed to impress the market, probably because investors became concerned about a slowdown in annual recurring revenue growth, compared to the trailing quarters. Surprising everyone, the stock dropped soon after the announcement, extending its withdrawal from the recent peak.

But the pullback looks temporary as the stock is on its way to breach the $300-mark in the coming months, according to experts. While market watchers are almost unanimous in their buy recommendation, the valuation looks high, after the steady gains, and that calls for caution. But CRWD is not a stock that can be ignored, rather it makes sense to keep an eye on it.

Recently, CrowdStrike was added to the Nasdaq 100, Nasdaq Equal Weighted, and Nasdaq Technology indexes. The action, which is considered a major milestone for a relatively new player like CrowdStrike, could lift the value and trading volumes further. The company is comfortably positioned to take advantage of the rapidly growing demand for IT security solutions and achieve sustainable long-term growth.

The company’s Falcon platform is considered a more effective tool for endpoint protection than legacy security software and to deal with serious breaches wherein attackers exploit system vulnerabilities and weaknesses in identity architecture to sneak into computer systems, rather than using malware. 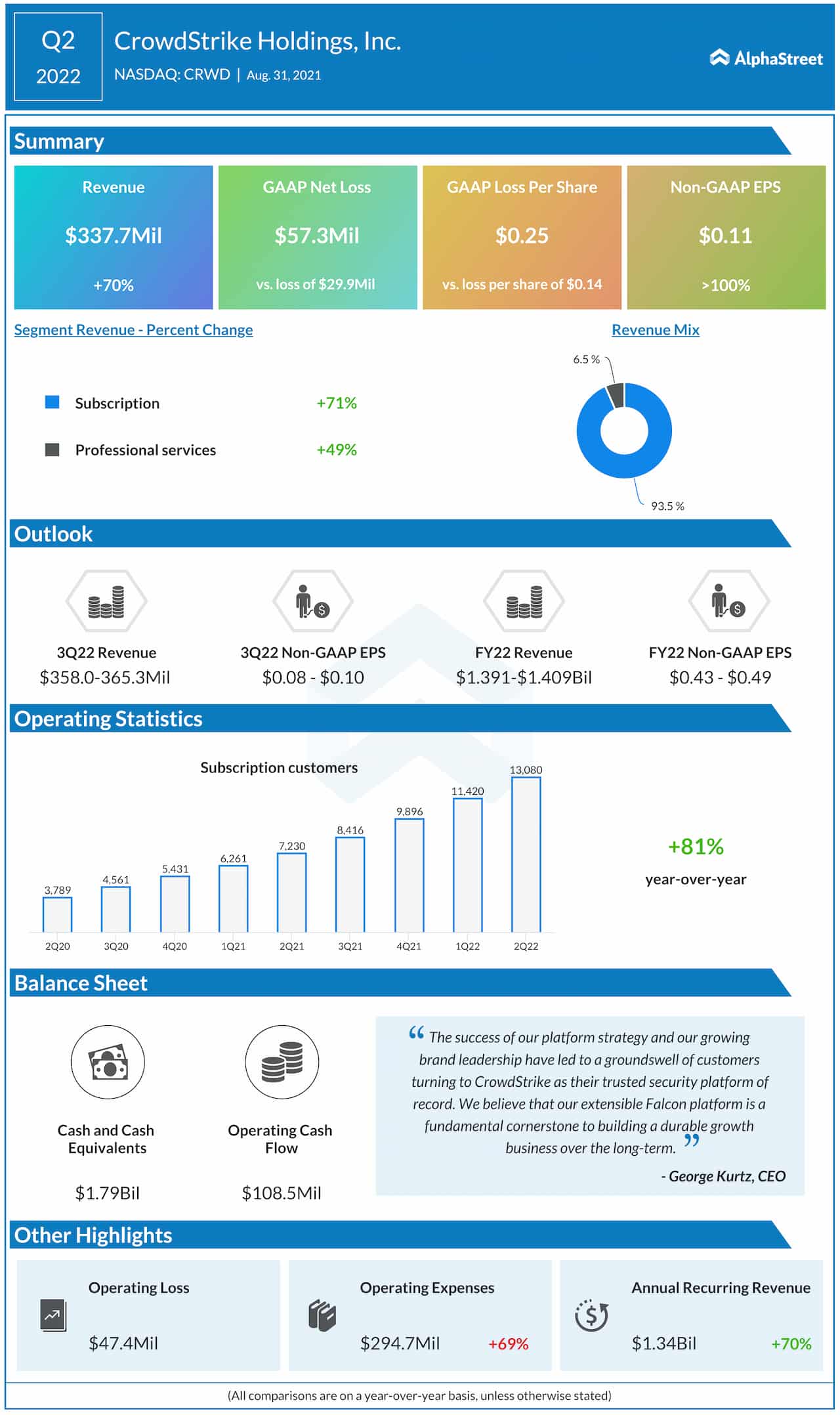 The lessons learned from recent attacks emphasized that a breach involves more than just malware, which is why companies need to employ a holistic breach prevention strategy rather than overly relying on malware prevention, regardless of its legacy or next-gen. As I’ve said before, nearly every breach you have ever heard of had two things in common, the victims had both a firewall and an antivirus solution, which is why we built the Falcon platform from the ground up to stop breaches and not just prevent malware.

CrowdStrike’s quarterly earnings beat the estimates consistently since the company went public in mid-2019, reflecting the underlying strength of its operating model. At $338 million, second-quarter revenue was up 70% from last year. Supported by the stronger-than-expected topline performance, adjusted profit more than tripled to $0.11 per share and beat the Street view.

Buoyed by the positive outcome, the management raised its full-year outlook. Meanwhile, it is worth noting that the company is yet to generate profit in GAAP-basis — which stands for generally accepted accounting principles. Annual recurring revenue rose as much as 70% in the second quarter, but it was slower than the growth recorded in the prior quarter.

CRWD opened Thursday’s session sharply lower but made modest gains in early trading. In the past six months, the shares gained around 21% and outperformed the broad market.