Did Target meet its target?

Much has been written and said about the current state of the retail industry so instead of dwelling on that any longer, let’s move on to our retailer of the day — Target.

Just like Macy’s and Gap Inc., Target has been struggling in the retail world under the ominous shadow of Amazon.

On Tuesday, Target reported its fourth quarter and fiscal year 2017 results. The retailer saw a 3.6% increase in total sales, driven by a strong holiday season, along with a 29% increase in its online sales.

The company however missed Wall Street expectations on earnings per share which led to a tumble in the stock.

Like every other retailer, Target has been facing immense competitive pressure from Amazon, and again, like everybody else, Target has been adopting different measures to keep its head above the water.

People love the convenience of delivery that Amazon offers. Like its peer Walmart, Target too has been going to great lengths to improve its delivery service.

Target is now offering free two-day delivery on goods ordered through its online channel. The service comes without any membership fee, unlike Amazon Prime.

Target also plans to expand the same-day delivery service to half of its locations this year. The company believes the acquisitions of Grand Junction and Shipt will aid this effort.

Similar to Walmart, Target owns a large number of stores, providing it with a huge advantage over Amazon in terms of offering various options on deliveries.

When it comes to fulfilling orders and reshaping, especially during the holidays, Target finds its stores to be more cost-efficient than its large fulfillment centers.

Although the retailer closed several low-performing locations, it has added new small-format stores which seem to have struck a chord with customers by offering exclusive collections.

Target said it is increasing its minimum wage to $12 an hour from this spring. The retailer has promised to hike the wage to $15 by the end of 2020.

Target has been making significant investments in various areas such as delivery, stores, digital channel and employees which has led to its margins getting squeezed. Although this appears to be a concern for investors, there are experts who argue that such investments are necessary for Target to retain its market share and grow over the long term.

On the other hand, unlike Walmart, Target does not own a flourishing grocery business. Despite its initial bumps, Amazon too is upping its game in the grocery space through its Whole Foods unit. To make up for this gap, Target has to put extra focus on its stores and its range of merchandise to attract customers. The initiatives the retailer is taking in these areas appears to be bearing fruit. 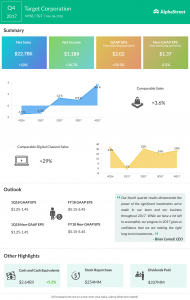