Facebook (FB) reported better-than-expected third quarter earnings of $1.76 per share, despite a considerable increase in expenses. Analysts had expected just $1.46 per share, predicting that the higher expenses required to establish better privacy security would weigh on its bottom line.

Meanwhile, revenue saw one of its slowest quarterly growth of 33% and missed street consensus. While analysts were expecting Facebook to post revenue of $14.29 billion, the company managed just $13.7 billion. 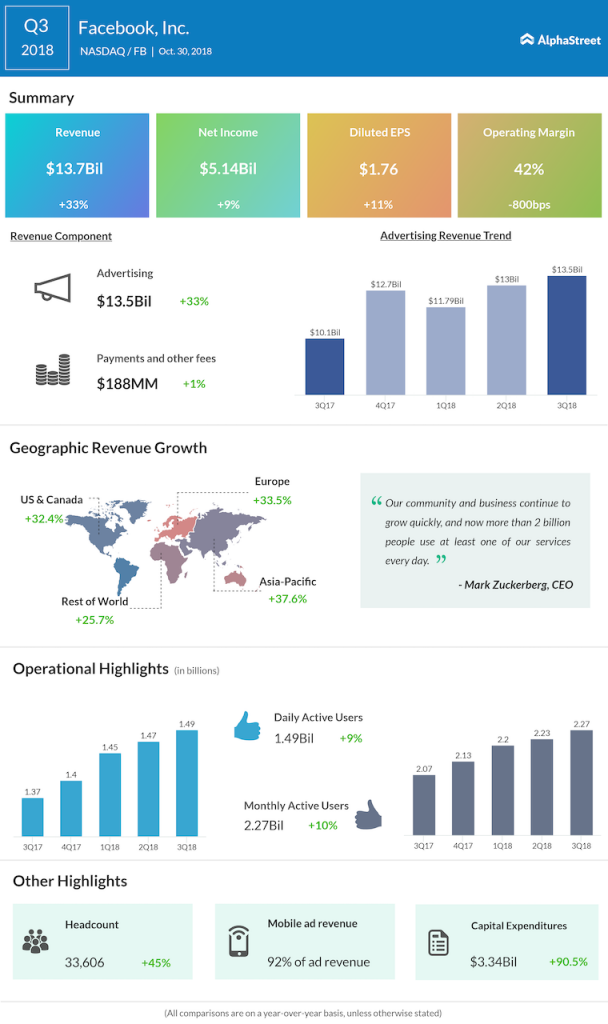 “Our community and business continue to grow quickly, and now more than 2 billion people use at least one of our services every day,” said CEO Mark Zuckerberg. “We’re building the best services for private messaging and stories, and there are huge opportunities ahead in video and commerce as well.”

Facebook had earlier projected that its top-line growth may drop to high single-digits as it invests more on Stories, as well as data security systems. Investors were apparently relieved that the revenue growth came in at 33% during the quarter and sent FB shares up 1.8% during after-market trading on Tuesday.

Battered by back-to-back data breach scandals, the stock is down about 22% so far this year. In the past 52-week period also, the stock is in red, down as much as 21%.

A recent report by eMarketer had found that Facebook is expected to hold over a fifth of the total US digital advertising market this year, only behind Google (GOOGL).

Facebook faces a fine of $1.63 billion for recent security breach