When Fitbit (FIT) reports its third-quarter results on October 31 after the market closes, analysts expect the company to post a loss of 1 cent per share, flat compared to the prior-year third quarter. The company has reported an annual decline in revenues for seven straight quarters and the analysts expect the same for the recently ended quarter in which revenues are pegged to be down about 3% at $381.5 million.

For the second quarter, the wearable fitness device maker reported a loss of 22 cents per share on revenues of $299.3 million, beating the consensus views. For the third quarter of 2018, the company expects revenue to drop 3% annually to a range of $370-390 million and loss is estimated to be in the range of $0.02 to $0.01 per share. Fitbit maintained its 2018 revenue outlook of around $1.5 billion during its second quarter reporting.

In August, Fitbit introduced Fitbit Charge 3, its new activity tracker. Even though the San Francisco-based firm expects its efforts in expanding the product portfolio and focus on MedTech space to strengthen its financial position, the company faces heavy competition from other players in the wearable fitness device market, mainly from Apple (AAPL), Xiaomi, Garmin (GRMN) and Huawei.

Fitbit mainly sells its products through online retail giant Amazon (AMZN), which already has forayed into healthcare space. Recently, Amazon joined hands with Arcadia Group, which launched a brand called Choice to sell medical devices through Amazon’s platform. If Amazon increases its focus in the fitness monitoring devices market in the future, it will be a massive blow for the already troubled Fitbit.

According to American College of Sports Medicine, “Wearable Technology” has got #1 position in the Top 20 Worldwide Fitness Trends for 2019. But how much market share Fitbit is going to get from this advantageous position is a big question mark.

The wearable technology, which appeared as a fitness trend in 2016, got the #1 position in 2016 and 2017. The ACSM report added that wearable tech returning back to the top spot in 2019 before dropping to #3 for 2018 might be due to the result of manufacturers correcting some monitoring inaccuracies of the past. 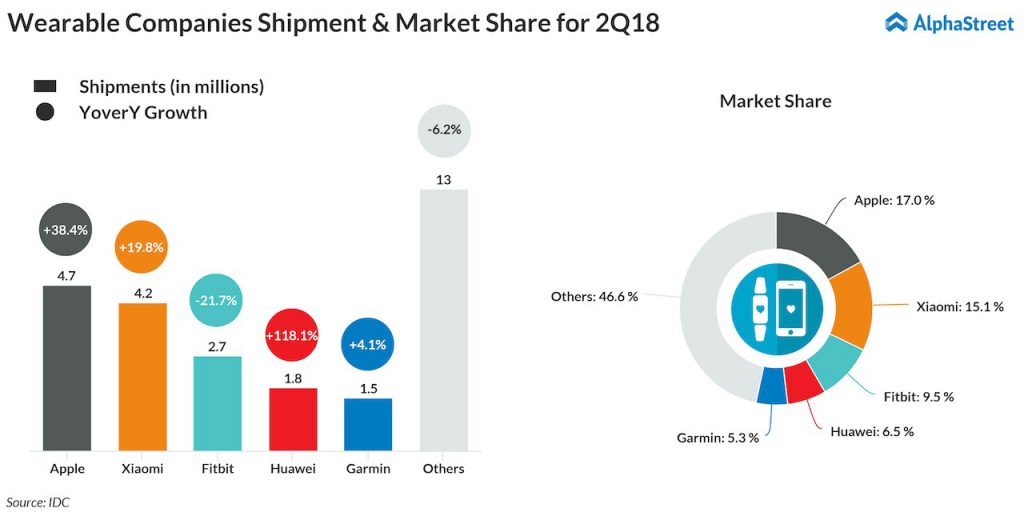 Fitbit’s share price has crashed to a single digit on November 3, 2016, after it reported weak Q3 results and a disappointing Q4 outlook for fiscal 2016. It never recovered after that and has been missing consensus estimate for sales continuously. Shares of Fitbit have slumped 20% in 2018 and 24% in the past one year.

The stock, which plunged to its all-time low ($4.40) last Friday, was trading in the positive territory during Monday’s morning trading session. However, after Dow dropped more than 250 points in the afternoon session, the tech stocks started bleeding and Fitbit traded below the $4.40 mark and registered a new all-time low.