Five Below goes above and beyond with healthy outlook

Five Below (FIVE), which announces itself as the “extreme-value retailer for tweens, teens and beyond,” went above and beyond investor estimates while posting its final quarterly results and on Wednesday. While shares closed on the lower side — at $66.96 — aftermarket trade helped Five Below catch up to as much as $68.60 per share, mostly helped by the positive outlook for the current quarter.

Five Below said it expects revenue between $290 million and $294 million in the current quarter, much higher than the Zacks analysts’ outlook of $286.3 million.

In the last twelve months, Five Below shares have gone from around $40 to $70. With brighter earnings and outlook, we could see the retailer making strategic moves to help navigate itself through the tough and dangerous retail marketscape.

In the era of Amazon and Alibaba, how retailers position themselves to avoid destruction would be key. And Five Below seem to have found their niche space — something that a lot of big names failed to do.

The confident results were also followed by the announcement that Tom Vellios, co-founder and Executive Chairman of Five Below, was named as the Chairman of the Board of Directors. With one of the key members who made the brand leading the board, we can soon expect bigger and better strategies from the retailer.

“Since we opened our first store in Wayne, Pennsylvania, our company has grown to almost 650 stores in 32 states,” said Vellios in a company statement.

As Five Below looks toward its goal of 2,500+ stores, investors seem to be happy with what is happening with the retailer. In the last couple of years of major retailers shutting down and being decimated by the giants of e-commerce, the story of Five Below is a welcoming one.

Do check out our illustrated earnings numbers in the infographic below for a quick snapshot of how Five Below performed in the fourth quarter of 2017. 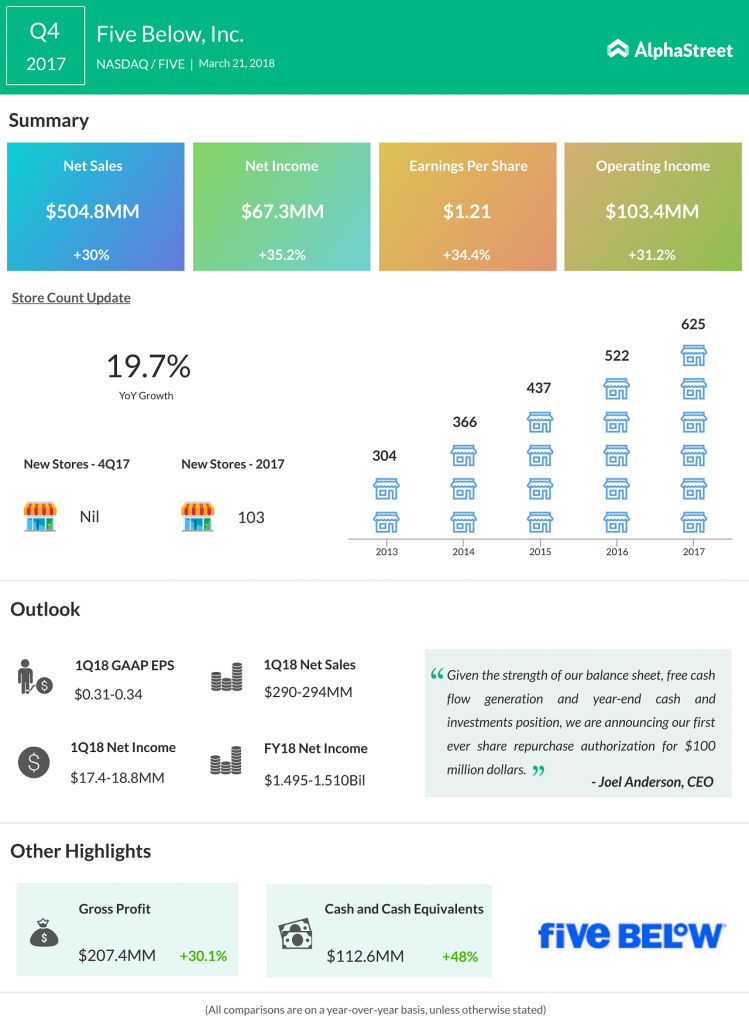