General Electric’s (NYSE: GE) bottom and top-line results for the second quarter of 2019 exceeded the market’s predictions. The industrial conglomerate also lifted its outlook for 2019. In a separate press release, GE announced that CFO Jamie Miller is stepping down. Shares of GE were trading up about 4% during the pre-market trading session. 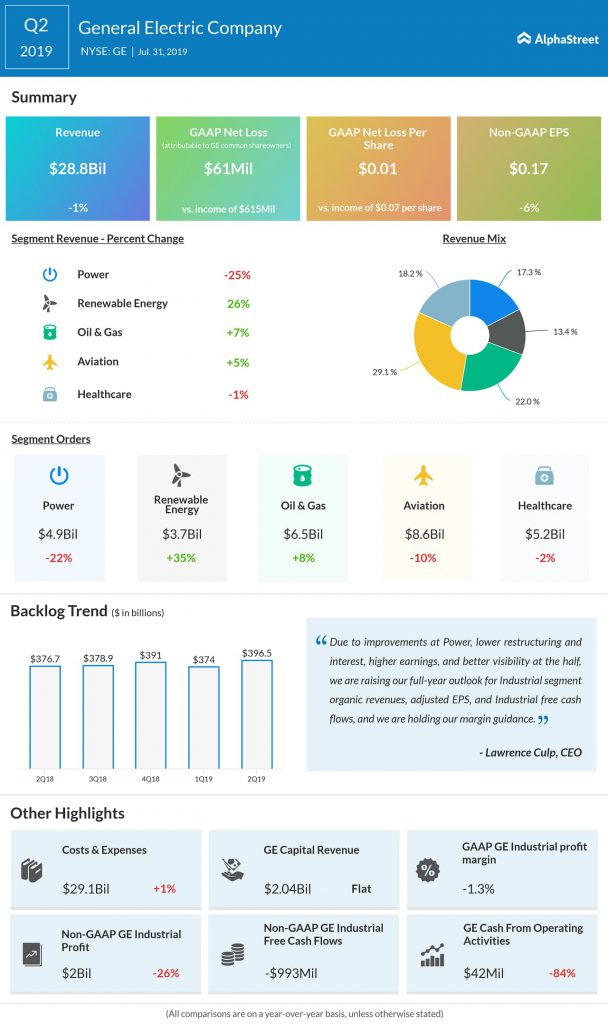 The company reported adjusted EPS of $0.17 for the second quarter, which included a $0.06 benefit from the tax audit resolution. Continuing EPS, on a GAAP basis, was a loss of 3 cents per share and net EPS was a loss of 1 cent per share. Revenue decreased 1% to $28.8 billion. Analysts had predicted GE to earn $0.12 per share on revenue of $28.52 billion.

“We made steady progress on our strategic priorities in the second quarter. Our top-line growth was solid, and Power made meaningful improvements on fixed cost reduction and project execution,” said CEO Lawrence Culp, Jr.

He added, “Due to improvements at Power, lower restructuring and interest, higher earnings, and better visibility at the half, we are raising our full-year outlook for Industrial segment organic revenues, adjusted EPS, and Industrial free cash flows, and we are holding our margin guidance.”

GE lifted its outlook for 2019. Adjusted EPS is now pegged to be in the range of $0.55 to $0.65 compared to the prior adjusted EPS outlook of $0.50 to $0.60. Industrial segment organic revenue is expected to grow in mid-single digits versus the previous estimated growth of low- to mid-single digit growth.

As the 737 MAX fleet remains grounded, GE said that it continues to work closely with Boeing (NYSE: BA) to actively manage its engine production. Boeing swung to a loss in its recently ended quarter, hurt by the $4.9 billion charge related to the 737 Max airplane grounding and associated delivery delays.

In the second quarter 10-Q filing, GE stated its cash flow was adversely affected by 737 MAX grounding by an estimated $0.3 billion and $0.6 billion for the three and six months ended June 30, 2019, respectively. If the 737 MAX remains grounded, based on current assumptions, the company anticipates a negative impact to cash flow of approximately $0.4 billion per quarter in the second half of 2019.

In a separate press release, GE announced that its finance chief Jamie Miller will transition from her role as CFO. GE has initiated a search to identify its next CFO and Miller will remain in her role to assist with a smooth transition. Jamie Miller, who joined the company in 2008 as CAO, was appointed as CFO in October 2017.

General Eletrcic stock had rallied 45% since the beginning of this year and it had dropped 17% in the trailing 12 months.