General Motors (GM) Wednesday reported third-quarter earnings of $1.87 per share, much higher than $1.26 per share projected by analysts, driven by strong truck sales in North America.

Revenue grew 6.4% to $35.8 billion during the third quarter. Analysts had expected the top line to hit just $34.21 billion. Riding on a Q3 record in average transaction prices, North America unit reported adjusted EBITDA margin on 10.2%. Average transaction prices rose to $36,000, about $800 per unit higher than the same period last year. 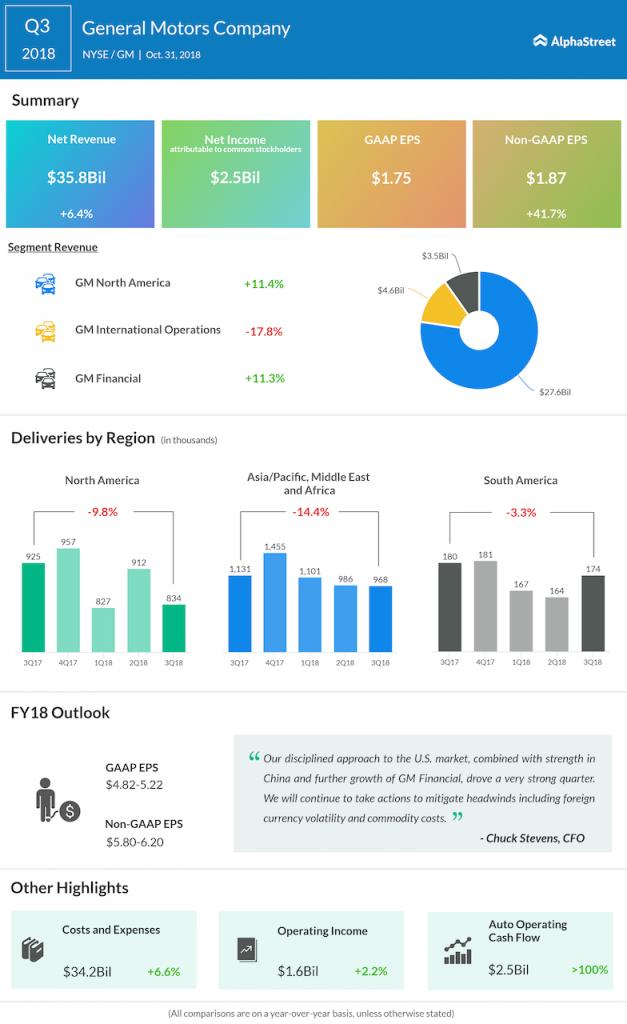 Buoyed by the results, GM shares jumped 10% during pre-market trading.

On a reported basis, the company swung to a profit of $1.75 per share from a loss of $2.03 per share a year ago, primarily helped by the sale of its operations in Europe to French automaker Groupe PSA.

“Our disciplined approach to the U.S. market, combined with strength in China and further growth of GM Financial, drove a very strong quarter. We will continue to take actions to mitigate headwinds including foreign currency volatility and commodity costs,” CFO Dhivya Suryadevara said.

In a sign that high commodity costs have started eating into the company’s profitability, GM’s second-quarter earnings dropped 4% to $1.81 per share but stayed above the consensus forecast. During the June quarter, sales came under pressure from an unfavorable product mix, resulting in a modest decline in revenues.

The long-term prospects of GM’s stock look bright, considering the company’s recent foray into the promising autonomous transport segment. If the trade-related issues get resolved soon, the new ventures including the autonomous unit could push up the company’s market value in the near future.

The stock has fallen 20% so far this year, underperforming the S&P 500 index.

Nvidia Corporation (NASDAQ: NVDA) Wednesday said its fourth-quarter revenues and profit increased in double-digits amid elevated demand. The results also topped the Street view, driving the stock higher during the

Shares of Macy’s Inc. (NYSE: M) were down 2.7% in morning trade on Wednesday. The stock has gained 37% since the beginning of the year. A day ago, the retailer