The company will release third-quarter results on October 18 before the opening bell. It is estimated that adjusted profit would drop modestly to $2.52 per share

Johnson & Johnson (NYSE: JNJ) has stayed largely unaffected by the COVID crisis and macroeconomic headwinds so far, which allowed the healthcare giant to maintain its market leadership. The company’s resilience to the challenges can be attributed mainly to its diversified portfolio.

Johnson & Johnson’s stock weathered the recent market selloff and peaked a few months ago, but changed course since then and entered a volatile phase. The consensus target price suggests a double-digit growth through the first half of next year. JNJ has been an investors’ favorite and has an impressive track record of beating adversities. A good thing about the recent dip is that the stock has become less expensive.

The New Jersey-based pharmaceutical behemoth can continue creating handsome shareholder value on the strength of its popular consumer health brands. The healthy balance sheet and growing cash flows come in handy for continued dividend growth. The high yields should attract more income investors to the stock. The drug business accounts for more than half of the company’s revenues, with strong contributions from top-selling products like Stelara and Darzalex. Of late, prostate cancer medicine Erleada and schizophrenia drug Invega are also gaining market share.

Meanwhile, the management’s decision to spin off the consumer business into a standalone entity is viewed as a positive move that would support growth in the long term. The company recently named the consumer business Kenvue, ahead of the spinoff that is believed to be the biggest organizational shake-up in its history. 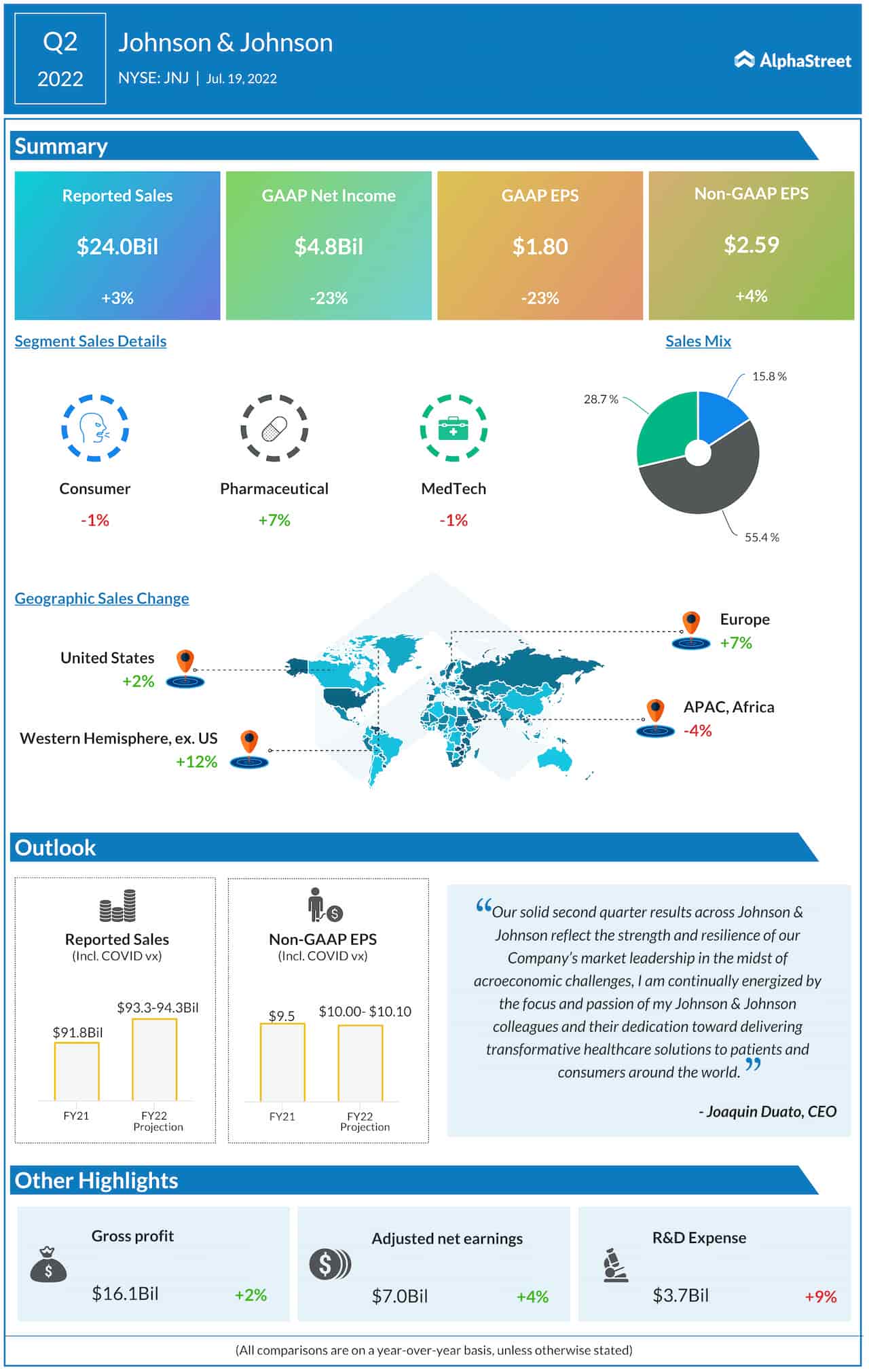 On the earnings front, Johnson & Johnson enjoys a distinction that not many companies can claim – quarterly profit either topped or matched expectations consistently for more than a decade. It also generated stable revenues during that period, even when external conditions turned hostile. The trend is expected to have continued in the third quarter, the results for which will be published on October 18 before the opening bell. It is estimated that adjusted profit would drop modestly to $2.52 per share on revenues of $23.45 billion.

In the second quarter of 2022, sales moved up 3% annually to $24 billion, mainly reflecting continued growth in the core pharma segment. Adjusted earnings rose 4% to $2.59 per share. However, modest declines in the consumer health and MedTech businesses came as a disappointment, and the management slashed its full-year earnings outlook.

Pfizer: A look at the headwinds and tailwinds this pharma giant faces in the near term

Outlining the company’s growth plan at the post-earnings meeting a few weeks ago, Johnson & Johnson’s CEO Joaquin Duato said the management would maintain focus on delivering the innovative pipeline, which includes expansion of the pharmaceuticals business to $60 billion by 2025 and delivering above-market compounded annual growth of at least 5%. Another key priority is to improve the performance of the MedTech segment further, supported by strong delivery of differentiated solutions and better commercial execution.

While the company has settled several of the lawsuits filed against it for selling talc products, including baby powder, that allegedly contained cancer-causing asbestos, the multiple litigations that are currently ongoing could be a cause for worry.

In the past six months, Johnson & Johnson’s stock lost about 11% and is currently trading below its 52-week average. The shares closed the last trading session slightly higher, outperforming the market, and continued to gain in the early hours of Tuesday.