JPMorgan Chase & Co. (JPM) reported revenues of $27.8 billion for the second quarter of 2018, in line with analyst expectations, and above the prior-year period results. Net income grew 18% to $8.3 billion while diluted EPS came in at $2.29, beating analyst expectations.

Average core loans, excluding CIB, were up 7% year-over-year. The company distributed $6.6 billion to shareholders during the second quarter. Last month, JPMorgan received approval to increase its dividend to $0.80 per share from the third quarter of 2018. The company also authorized an equity repurchase program valued at $20.7 billion. 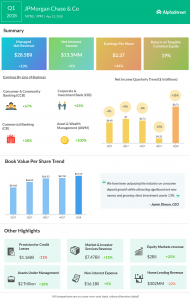 Apple Inc. (NASDAQ: AAPL) on Thursday said its first-quarter sales and earnings increased, aided by stable demand for its popular smartphone brand iPhone and strength of the services business. The

Intel Corporation (NASDAQ: INTC) has been on an aggressive expansion drive to strengthen its foothold in the semiconductor industry. The chipmaker's recent performance indicates it has effectively tackled competition through