Kohl’s (KSS) has a long way to go before getting back on track. Here’s why

Benefiting from the favorable shift in consumer spending and improved customer experience, sales grew 60% in the first quarter

Unlike some of its peers in the retail space, Kohl’s Corporation (NYSE: KSS) has borne the brunt of the pandemic as the struggling retailer was hit by widespread store closures and falling customer traffic. Having regained a part of the lost momentum, the Wisconsin-based apparel retailer recently raised its sales outlook.

Experts following Kohl’s stock believe the post-earnings sell-off has created a fresh buying opportunity, considering its growth potential. Currently, the consensus rating on KSS is moderate buy. The stock is fairly priced, and the pullback has made it more affordable. The continuing improvement in bottom-line performance, which topped expectations for the fifth consecutive quarter, should brighten investor sentiment going forward.

Department stores that are not supported with full-fledged e-commerce divisions suffered during the coronavirus crisis, which prompted most of them to ramp up their digital capabilities to align with the new shopping habit. Interestingly, online sales account for only 25% of Kohl’s total revenues. Sales also suffered because the merchandise it offers – apparel, clothing, and bedding – falls under the consumer discretionary category.

The company’s recovery is dragged by its underlying weakness, marked by prolonged sales slump and faltering margins due to ineffective strategies. Recently, the management appointed two new directors under an agreement with a group led by activist investors who have been calling for major changes to the board, taking a cue from the challenges facing the company. 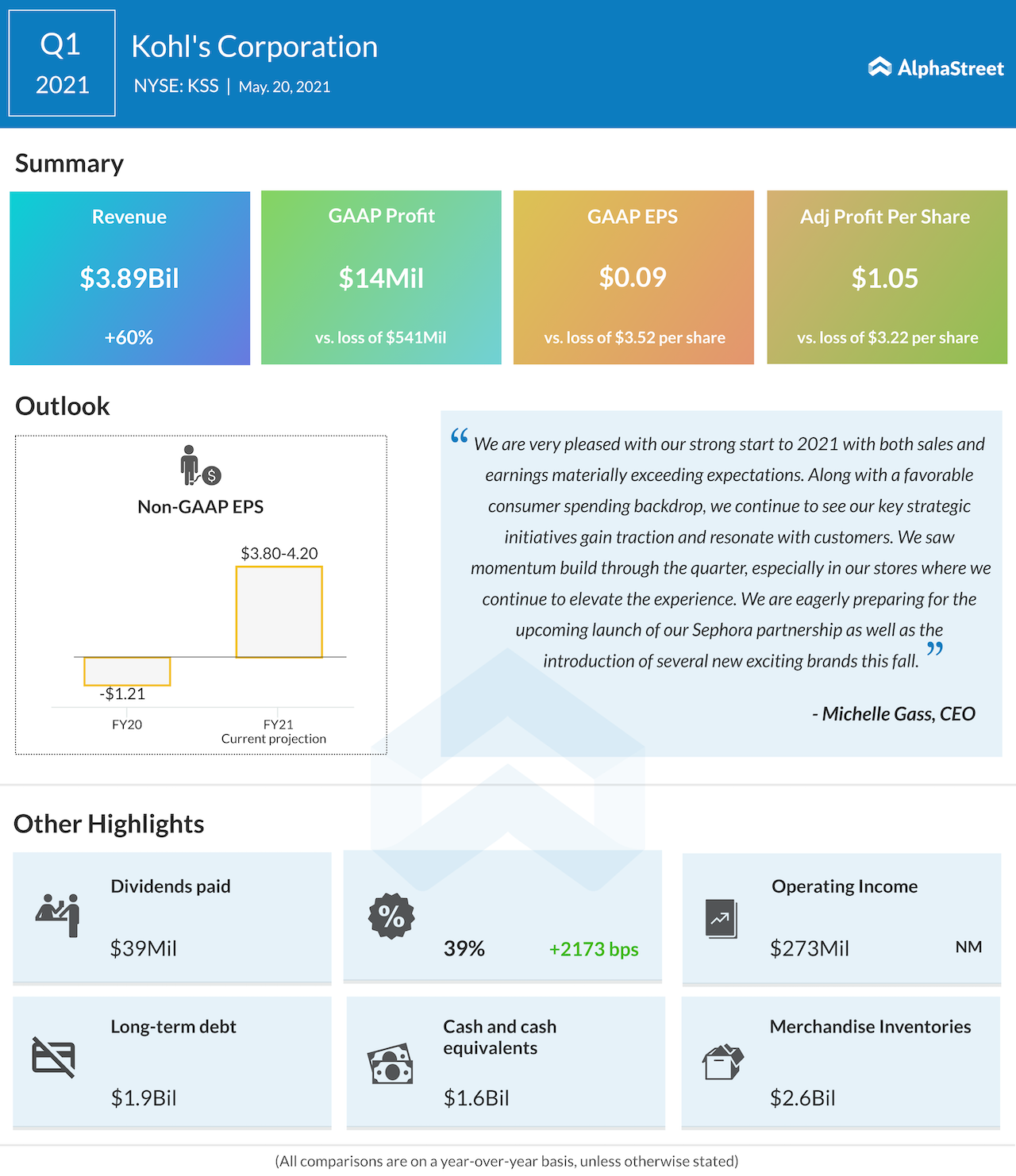 Strong e-commerce sales — thanks to the expansion of fulfilment network and launch of curbside-pickup — helped the company navigate through the crisis. The majority of its 1,000-odd stores have been reopened, aided by the vaccination campaign and withdrawal of restrictions. It is worth noting that in the early days of the crisis, the company had to close almost every unit of its extensive store network, which has given it an advantage over most rivals. Future performance will depend on demand growth for high-margin items and the pace at which store traffic recovers. The management’s revised strategy has started paying off, but it might take some time for the business to achieve full recovery.

“We are making great progress in our efforts to improve profitability. We delivered a 7% operating margin, the highest Q1 rate in eight years. This performance was driven by continuing to execute against our strategy, including strong inventory management, our pricing and promotional initiatives, and expense discipline. In addition, we capitalized on a favorable industry backdrop that provided for greater full-price selling. So in summary, we had a great first quarter and have clear business momentum as we look ahead,” said Michelle Gass, chief executive officer of Kohl’s, at the Q1 conference call.

After suffering losses early last year, Kohl’s turned to profit in the second half and extended the recovery into the first quarter of 2021. Earnings, on an adjusted basis, came in at $1.05 per share in the April quarter defying expectations for break-even, compared to last year’s loss of $3.22 per share. Benefiting from the favorable shift in consumer spending and improved customer experience, sales jumped 60% to $3.9 billion.

The last six months have been pivotal for Kohl’s when its market value nearly tripled, before stabilizing at the current levels. But the stock pulled back this week after the earnings announcement and traded lower on Friday afternoon.