At the backdrop of registering their worst single-day fall (-4.8%) since 2011 on October 10, three major S&P 500 tech companies will be reporting their quarterly results this week. Microsoft (MSFT) is set to announce its first quarter 2019 results on Wednesday evening, followed by Amazon (AMZN) and Alphabet (GOOGL) on Thursday evening.

Analysts expect Microsoft’s earnings to climb 14% year-over-year to $0.96 per share and revenue is predicted to jump 14% to $27.9 billion for the recently-ended quarter. More than 90% of the analysts covering Microsoft have rated the stock either “Strong Buy” or “Buy”. Shares of the tech bellwether, which inched up 0.15% to $108.66 on Friday, have a consensus 12-month price target of $124.

Even though the October sell-off pulled down the stock prices of the tech companies, analysts are bullish on Microsoft ahead of the company’s earnings report. The Redmond, Washington-based firm has not missed the top and bottom line predictions in the past nine quarters. When the company reported its third quarter 2017 results in April 2016, it topped the earnings estimates and slightly missed on the revenue projections.

You may also like: Microsoft makes a strategic investment in Grab

The company beat analysts’ forecast for Q4 earnings and revenue by posting a non-GAAP EPS of $1.13 and revenue of $30.08 billion. Analysts had predicted earnings of $1.08 per share and revenue of $29.3 billion. Also, GAAP EPS increased 7% to $1.14 in the fourth quarter. Revenue from Azure, Microsoft’s cloud business, grew 89% year-over-year.

Once again, Azure is expected to power the results for the first quarter. At the end of 2017, Microsoft’s share in the cloud business stood at 23%, while it’s rival Amazon, which offers cloud services through its AWS division, topped with 40% share. For the quarter ended September 30, Azure is expected to continue its 90-ish percentage growth achieved in the recent quarters.

Apart from the Azure revenue growth, Wall Street will be keenly looking at how the software giant has performed in its legacy Windows and Office businesses.  Revenue from the gaming business and Xbox live active users count will also be watched closely by the investing community. 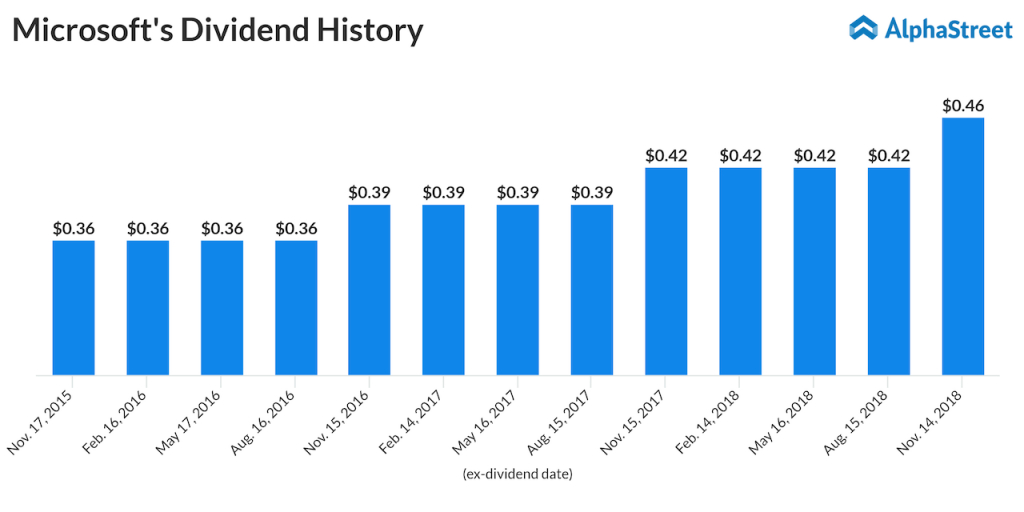 The stock, which climbed to its all-time high ($116.18) on October 3, dropped to just over $104 when the tech sector plunged during the second week of this month.  Shares of Microsoft have rallied 27% so far this year and 39% in the past 52-week period.