Mylan’s (MYL) stock plunged about 5% in the pre-market trading after the company’s revenues failed to meet estimates. However, adjusted earnings surpassed the consensus for the first quarter. The pharma giant has reaffirmed its outlook for 2019 which it has provided last quarter.

The company’s stock has been volatile this year touching a new 52-week low of $26 in February. It has recovered from those levels in the past two months and now trading around $26 range. In 2019, the stock has witnessed a modest growth of 3% recovering from last year’s losses.

Mylan’s revenue decreased 7% to $2.49 billion hurt by weaker sales from North America and European regions. North American region continues to be impacted by its ongoing restructuring activities in Morgantown, West Virginia facility and muted sales growth due to intense competition. 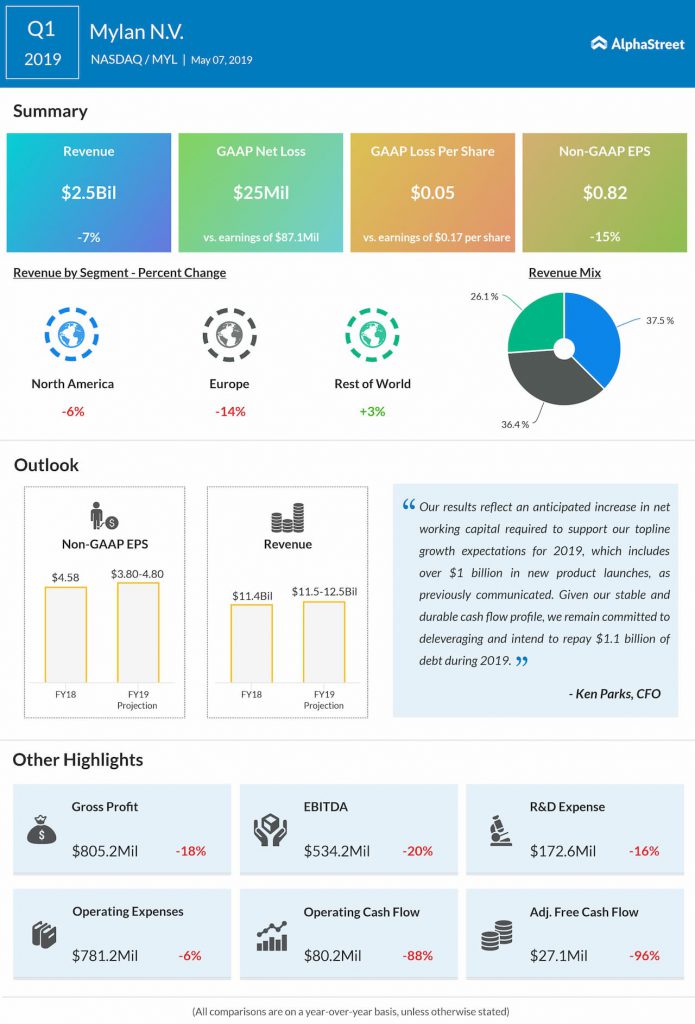 European region saw a 14% dip in sales due to forex losses and weaker sales from its customers due to timing-related issues. Q1 revenues failed to meet Street estimates of $2.69 billion, missing it by a huge margin.

Adjusted earnings dwindled 15% to $0.82 per share impacted by restructuring activities carried on the Morgantown plant. However, the reported EPS surpassed the analyst consensus of $0.79 per share.  It’s worth noting that the company received a warning letter from the US Food and Drug Administration (FDA) last quarter for its Morgantown plant and Mylan has been investing in the remediation activities to fix all the issues raised by the regulator.

Mylan today confirmed its outlook it provided last quarter. Commenting on the outlook, CEO Heather Bresch said: “Mylan’s first quarter represents a solid start to the year and we remain positioned to reaffirm our guidance for 2019.”

Last quarter, the company guided full-year adjusted EPS to be in the range of $3.80 to $4.80 and revenue to come between $11.5 billion and $12.5 billion, aided by growth across all geographical regions. Adjusted free cash flow is guided in the range of $1.9 billion to $2.3 billion for the year.

For the fourth quarter, revenue dropped 5% to $3.08 billion, hurt mainly by a decline in the sale of existing products. However, the top line exceeded the Wall Street forecast. During the quarter, a 1% revenue growth in Europe and 4% increase in the rest of the world were more than offset by a 16% fall in the North American market, continuing the recent trend. Adjusted earnings declined 9% to $1.30 per share during the three-month period and missed market estimates.