NBCUniversal, which owns and operates several cable networks, theme parks, and movie studios, saw its revenue grow primarily due to the successful coverage of Super Bowl LII and the 2018 winter Olympics. This generated $1.6 billion in revenue to the TV business.

Comcast’s investments in theme parks also paid off well as the unit generated 14.5% increase in revenue. 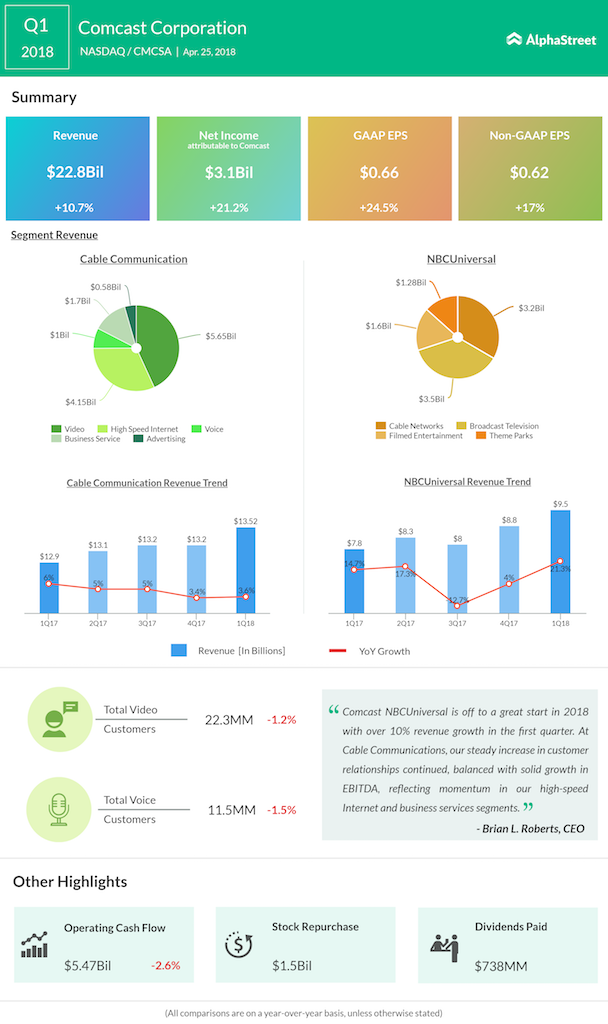 The Philadelphia, Pennsylvania-based company, however, faces numerous challenges in the saturated and highly-competitive video market. Though it managed to add 379,000 high-speed internet customers during the quarter, it continues to lose video and voice customers due to increase in cord-cutting.

On the other hand, Comcast has put forth a $31 billion formal bid to acquire the UK-based Sky Plc, threatening media mogul Rupert Mudroch’s attempt to gain complete control over the Pay TV giant.

“Comcast NBCUniversal is off to a great start in 2018 with over 10% revenue growth in the first quarter. At Cable Communications, our steady increase in customer relationships continued, balanced with solid growth in EBITDA, reflecting momentum in our high-speed Internet and business services segments,” said CEO Brian L. Roberts in a statement.

Meanwhile, the media company is working to diversify its sources of revenue by dipping its toes into the healthcare business, joining hands with a health insurance company, Independence Health, in a move to create a digital health entity.