Nike stock was almost close to its 52-week high ($90.00) that it reached in April when it witnessed the day’s high ($88.69) during the early hours of today’s regular trading session. 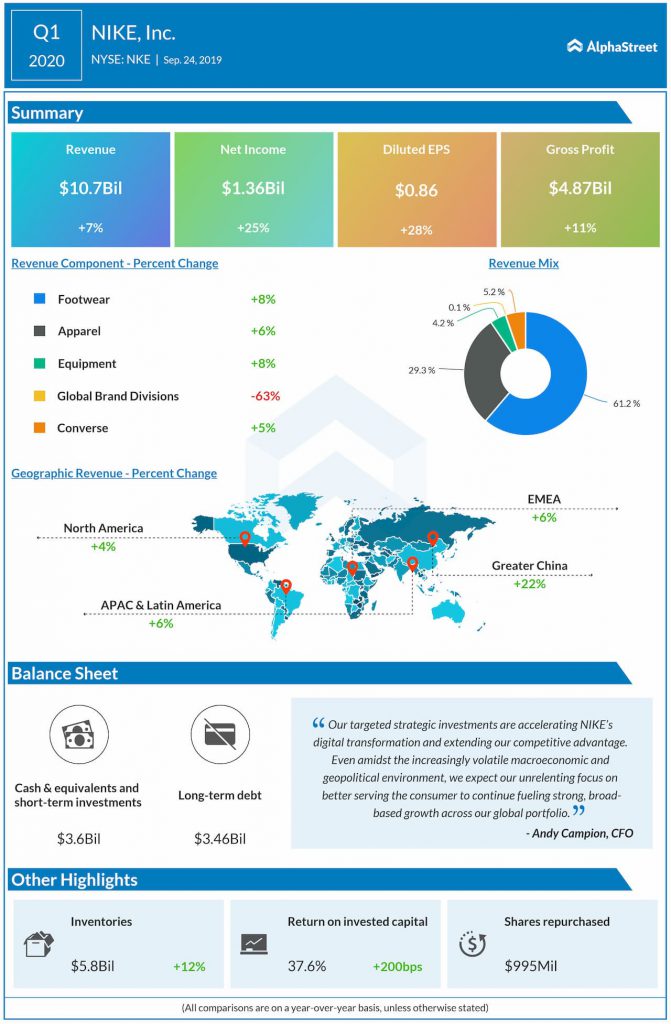 Revenue increased to $10.7 billion in the first quarter, up 7% on a reported basis and up 10% on a currency-neutral basis, driven by growth across all geographies.

On a currency-neutral basis, revenues for the NIKE Brand increased 10% to $10.1 billion in the first quarter of 2020, driven by growth across NIKE Direct and wholesale, key categories including Sportswear and the Jordan Brand, and continued growth across footwear and apparel.

Revenues for Converse were $555 million, up 8% on a currency-neutral basis, mainly driven by double-digit growth in Asia and through digital globally, which was partially offset by declines in the US.

“Even amidst the increasingly volatile macroeconomic and geopolitical environment, we expect our unrelenting focus on better serving the consumer to continue fueling strong, broad-based growth across our global portfolio,” said said CFO Andy Campion.

During the end of July, Nike’s rival Under Armour (NYSE: UAA) reported its second quarter results. Under Armour shrunk its net loss in the second  quarter and beat the analysts’ views. However, sales missed consensus’ targets.

Nike stock had given a positive return of 18% year-to-date and 3% in the trailing 12 months.