Burger chain Shake Shack (SHAK) reported stronger than expected earnings and revenues for the December quarter, reflecting its initiatives to expand the store network and digital platform. However, the company’s stock dropped in the extended trading session Monday after the management’s guidance for fiscal 2019 fell short of expectations. 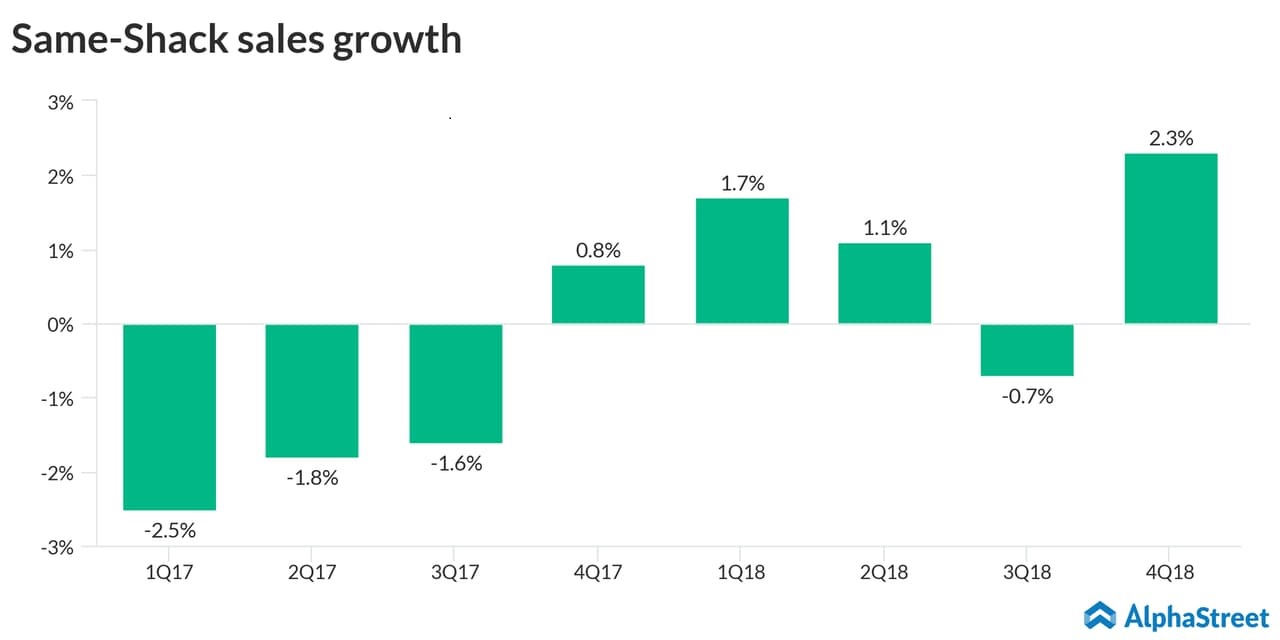 During the quarter, total revenues climbed 29.3% from last year to $124.3 million and exceeded the market’s prediction. Shack sales moved up 29.6% while same-Shack sales rose 2.3%.

Despite the increase in sales, adjusted earnings dropped to $2.4 million or $0.06 per share from $3.9 million or $0.10 per share in the fourth quarter of 2017, but came in above analysts’ forecast. The bottom-line was negatively impacted by a 30% increase in general and administrative expenses, mainly due to higher investments in digital and foundational infrastructure as part of the ongoing growth initiatives.

The bottom-line was negatively impacted by a 30% increase in general and administrative expenses, mainly due to higher investments

On an adjusted basis, the New York-based restaurant operator posted a net loss attributable to shareholders of $0.96 million or $0.03 per share, sharply narrower than a loss of $12.46 million or $0.47 per share recorded in the corresponding period a year earlier. The year-over-year improvement is attributable to the favorable impact of the recent tax reform.

“Looking ahead, in 2019 we expect another year of record unit growth with 36 to 40 new company-operated Shacks, 16 to 18 net new licensed Shacks with our international growth focused on Asia and our entry into the new markets of mainland China, Singapore, the Philippines, and Mexico,” said CEO Randy Garutti.

For fiscal 2019, the management expects revenues in the range of $570 million to $576 million. Same-Shack sales growth is estimated to be flat to up 1%.  The average annual sales volume for total domestic company-operated Shacks is forecast to be in the $4.0-$4.1 million range. The outlook, meanwhile, came in below Wall Street’s expectations.

Looking further ahead, the management expects to open about 200 domestic company-operated Shacks and 120 global licensed Shack in fiscal 2020, when total revenues are expected to reach $700 million.

Shake Shack shares closed Monday’s regular session lower and continued to lose in the after-hours trading. The stock has gained about 7% since the beginning of the year.