Square (SQ) reported stellar results for the second quarter beating analyst estimates on both earnings and revenue front. However, earnings guidance for the quarter ending September came in below street expectations pushing the stock marginally down in the extended hours of trading.

Adjusted revenue surged 60% in the quarter touching $385 million resulting in earnings of $0.13 per share, which is a $0.06 improvement over last year. EBITDA margins, on an adjusted basis, saw 3% improvement in the quarter.

The company shrank its net loss to $6 million compared to $16 million in the last year. It’s worth noting that Square has been investing heavily for more than a year to widen its footprint and improve its service offerings, which resulted in the increased product development and higher marketing expenses over last year. Even though it had a dent on the company’s bottom line, the efforts are expected to bear fruit over long-term.

Gross Payment Volume (GPV) is a key metric tracked by the investors. GPV rose 30% to $21.4 billion, aided by continued contribution from large sellers. For the first time in the company’s history, large sellers’ contribution stood at 50% of GPV, which is a healthy sign for Square. Large sellers process more than $125,000 on a yearly basis using the platform. 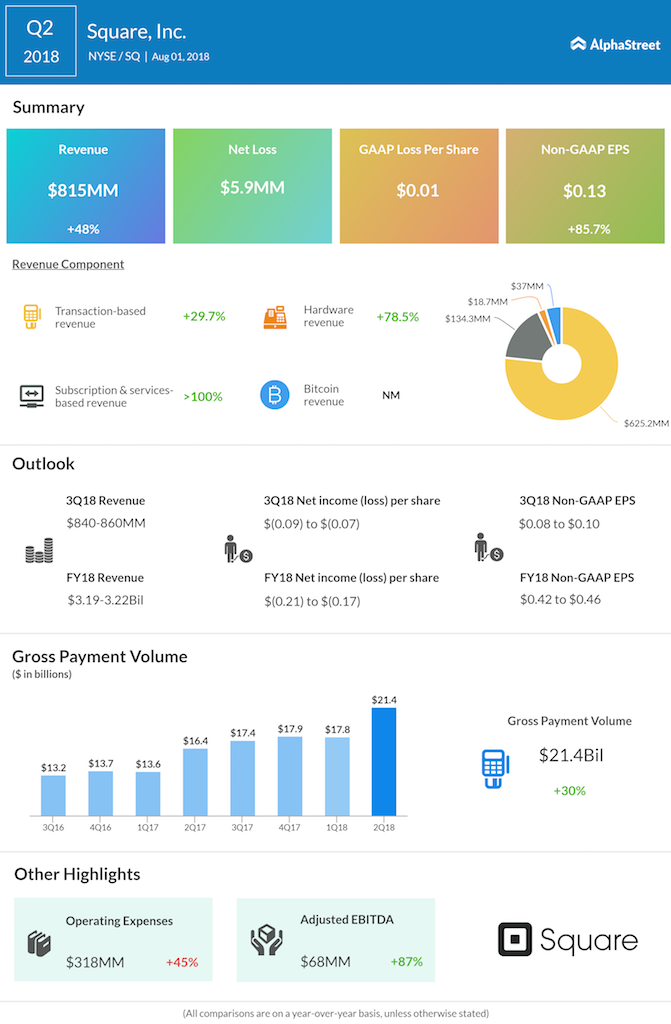 Square garnered $37 million from Bitcoin trading, which is an increase of about 9% compared to $34 million raked in the first quarter of 2018. In January, bitcoin trading was launched in its Cash app, available throughout the US excluding few states. The company expects to garner more revenues from bitcoin trading in the future.

Square withdrew its application for a charter license with the Federal Deposit Insurance Corporation (FDIC) in July. However, the company plans to refile with the regulators after making amendments to the application. It’s worth noting that Square applied for an industrial loan company (ILC) license last year. Post-approval, it can offer loans and deposits to small businesses, which has been an underserved market with huge upside potential along with increased risk. Currently, the San Francisco, California-based company has joined hands with Celtic Bank, which is an ILC, to offer loans to SMBs.

The payment processor expects its third-quarter adjusted earnings to be in the range of $0.08 to $0.10 per share trailing analyst consensus of $0.13 per share. Adjusted EBITDA is forecasted to be between $62 million to $65 million. Adjusted revenues outlook came in better than street estimates in the range of $407 million and $412 million.

Investors are upbeat about the company’s performance sending the stock up a whopping 150% over the last 12 months and more than 90% in 2018.