Retail giant Target Corp (TGT) on Thursday saw its stock plummet 5.3% to as low as $66.53 after posting its sales of November-December period, updating on FY 2018 guidance, and announcing the change of its Chief Financial Officer.

For the combined November-December period, Target said that comparable sales grew 5.7%. This was higher than the 3.4% growth posting in the same period a year ago.

Comparable digital sales soared 29% in the two-month period. Target estimates 2018 to be the fifth consecutive year in which digital sales improved more than 25%.

CEO Brian Cornell weighed in, “Given our fourth quarter outlook, we are on track to deliver Target’s strongest full-year comparable sales growth since 2005, market-share gains across all of our core merchandising categories, and double digit growth in Adjusted EPS. In 2019, we expect to build on this momentum as we gain further scale in our fulfillment capabilities and deliver profitable growth throughout the year.”

Target also announced that Chief Financial Officer Cathy Smith would be retiring from the company. Since her replacement is yet to be named, Target said that Smith would continue in her role as CFO till the process is complete, and then move to an advisory role until May 2020 to ensure a smooth transition.

In the previously reported quarter, Target stock saw a battering after missing earnings estimates. The company had then reported a 5.1% growth in comp sales, which also fell below the market consensus of 5.2%. 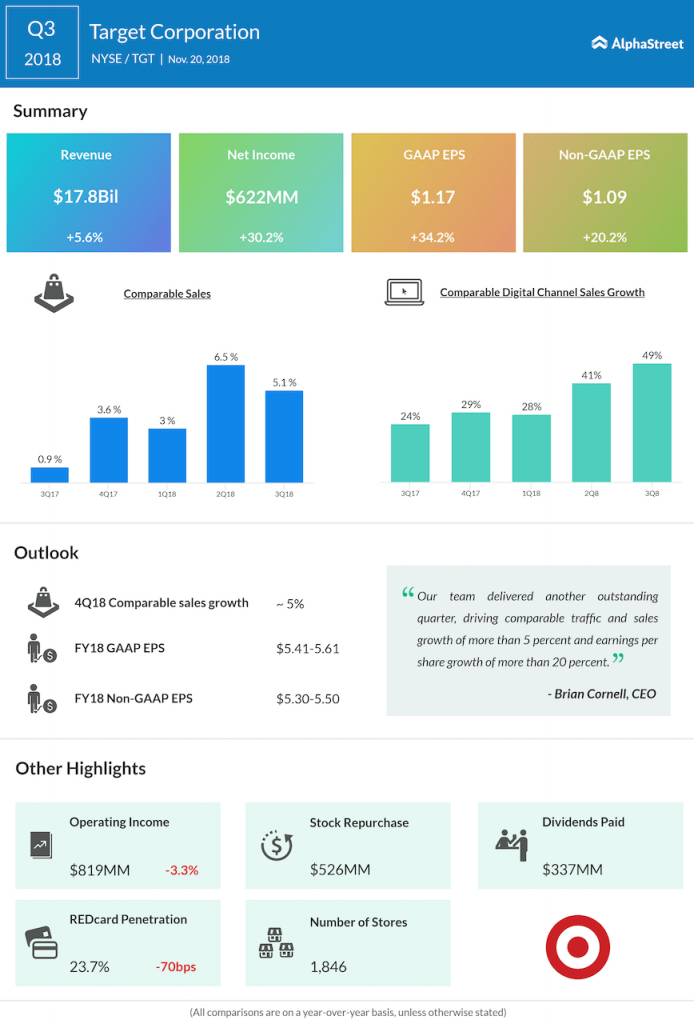 Despite severe setbacks due to the lowering shareholder confidence, Target has remained optimistic about the holiday quarter. But as it anticipates comp sales growth of about 5%, the Street seems to be pushing for Target to buckle up and show some real change in its results. If it fails to surprise in its fourth-quarter results, the stock might see further sliding.