Just a week after Brian Crutcher resigned due to a breach of the code of conduct, Texas Instruments (TXN) reported its second-quarter results after the bell. The chipmaker posted better-than-expected results with revenue increasing 9% to $4.02 billion and profits jumping 36% beating analyst estimates on both metrics. Texas’ shares rose marginally in the extended hours of trading.

The chipmaker continues to witness strong growth for its products in both Analog and Embedded Processing division, primarily aided by higher demand from industrial and automotive markets.

Analog division brings in the lion’s share of revenues to the company. The segment’s performance continues to be impressive with sales increasing 12% aided by improved volumes. Since Texas Instruments does most of the manufacturing in its facilities, it’s well prepared to meet the demand for its wafers with a close tab on inventory. With its growing focus on 300-millimeter wafers, it’s going to bode well for the Analog division as it is 40% cheaper over its predecessor. 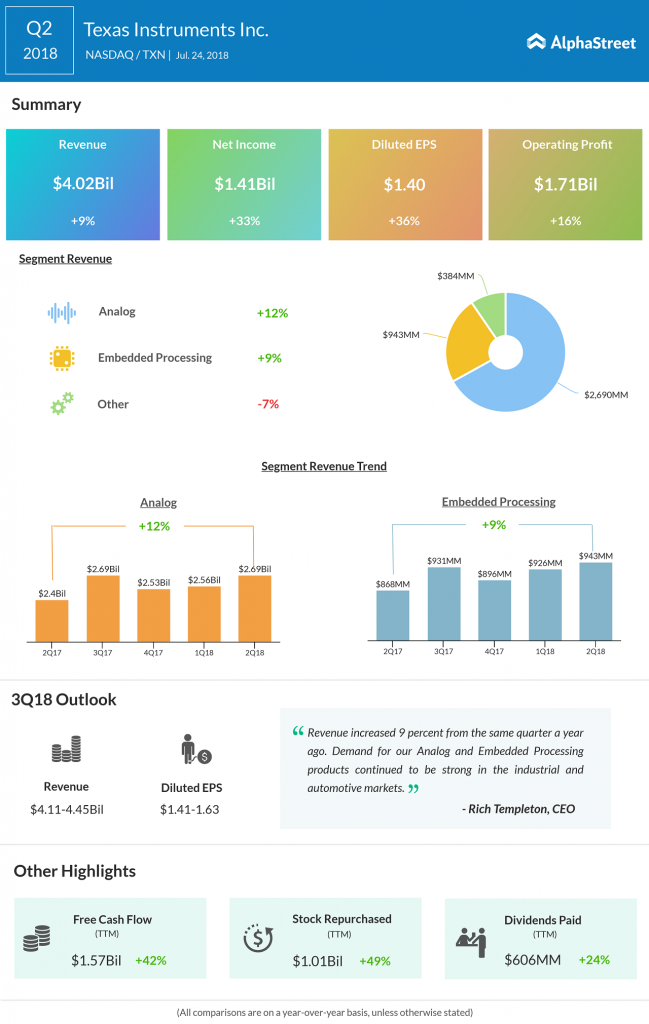 Embedded Processing revenue jumped 9% due to a solid performance from all its product lines.  Last week, Board approved a dividend of $0.62 per share with record date set at July 31, 2018.

Last week CEO Brian Crutcher who has been associated with the company for more than two decades has made an abrupt exit due to the code of conduct breach. The chipmaker hasn’t revealed more details on the breach and announced Rich Templeton would be handling the CEO role until the replacement for Crutcher is found.

For the third quarter, Texas Instruments forecasts revenue in the range of $4.11 billion to $4.45 billion, and earnings per share to be between $1.41 and $1.63, including about $10 million of discrete tax benefit. The company’s stock is having a dream run in the bourses jumping more than 40% over the past 12 months, and up nearly 9% in 2018.