The pricey and priceless of S&P 500

If you can afford these stocks, you should probably contemplate on having them in your kitty.

Value investors often tend to stay away from expensive stocks. They do love some of the performing ones, but who in their right minds would shell out hard earned 1000 dollars on one bloody share! For them, it’s ‘stay on ground, stay safe.’

So come, let’s bust this myth.

Ground is not the safest place

The company decided to continue its decades-long journey with the same number of outstanding shares, which explains the unusual share price. Had the company split its stock many times over the past few years, the share price could still have been below $1,000 despite the surge in market value. Hence share price is not really a big deal.

Pick a stock for its performance, not price. Stock price, however, indicates that the company had a fairly good run at the stock exchange.

Now that we have come in terms with choosing stocks that matter, let’s take a look at S&P 500’s most “expensive” four stocks, and see how investment worthy they are. 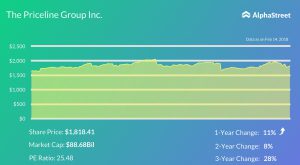 As the saying goes, you can either buy a Priceline share or book a vacation with them. We would say a Priceline share is as good as a vacation.  The KAYAK-owner’s hotel room nights and bookings have climbed along with its stock price over the years. The company is also more cost-conscious than its rivals, which is evident from its top-class gross margin.

Diversity is probably Priceline’s biggest positive, with operations spread across a wide spectrum, from flight booking to restaurant reservation. The slowdown in growth rate has recently been a cause of concern for investors, but given the strong travel market that lies ahead, Priceline seems to be at a better position than its rivals to bite off a lion’s share. 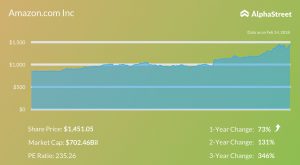 For most amateur investors, PE ratio is the messiah that leads to the best stocks. And Amazon is a shocker with an astounding PE ratio above 230! Still, we love Amazon,

Over three years, the share has grown 346%, and there seems to be no slowing down. The meticulous expansion and diversification into complementary as well as new fields, and the constant allocation of funds for better investments show the company’s commitment towards keeping up with the rapid growth.

And then there is the founder-CEO Jeff Bezos, who has a 10% ownership and his heart in the company.  His “consumer happiness-centric” approach is the driving factor behind its 119 fulfillment centers built across the US, as well as the highly-successful Amazon Prime. Rivals will have a hard time catching up.

Currently the sole threat that Amazon seems to be facing is the risk of action from Antitrust regulators, as speculations are running amok on online discussion platforms.  A correction of the stock may be in the pipeline, so just be aware of what is happening. 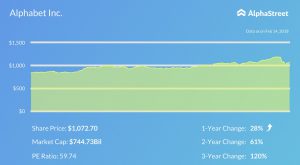 If Amazon is too risky and expensive for your cart, you could “search” your success in Google.

In 2017, Alphabet briefly touched the $1,000 mark, before going down again. Twice. When the stock rally is aborted at round figures such as these, there is a general tendency of the stock losing steam due to lack of enthusiasm. However, Alphabet bucked this trend and is now way beyond that mark.

Alphabet has an amazing balance sheet with huge cash reserves that can withstand even if the company makes a terrible merger blunder (we were not pinpointing the Snap merger proposal, if you felt so). While core margins have started showing signs of improvement, a 40% growth in non-advertising revenue in the third quarter is nothing short of spectacular.

The tussle with EU is probably the biggest issue the search giant is facing at the moment. 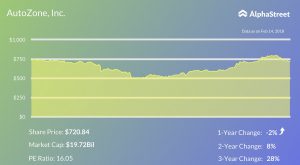 You may forsake a holiday; you may go to the stores to purchase household items; and may survive without YouTube; but when your car needs repair, you need to get it done quickly.  And that is why, if Autozone suffers another massive plunge like what we saw last year, you need to get the shares at the dip.

Shiver not by seeing the 1-year decline. Vehicles are deteriorating assets and require maintenance all the time.  Autozone has over 5,300 service centres for the same.  The company has a well-diversified portfolio of parts and supplies, and last year’s plunge was caused more-or-less due to the volatile nature of the sector it operates in.

There are a few negatives also, if you would call them so.  New auto sales have been declining over the past two years. However, since cars always need maintenance, the fall in new car sales don’t really matter. Second, they don’t pay dividends as they are obsessed with buying back shares.

But then, it’s a double-sided coin.