The company is expected to report profit when it releases Q4 results later this month, after incurring a loss last year

When the market went into shutdown mode following the virus outbreak last year, Nike, Inc. (NYSE: NKE) bore the brunt of low customer traffic like other store operators that sell consumer discretionary items. After a period of supply chain and inventory issues, the footwear giant is getting back on track aided by its brand power and revamped digital ecosystem.

The Oregon-based sneaker maker expanded its market value steadily since early last year, with the stock climbing to an all-time high in January this year before entering a volatile phase. The current slowdown is temporary and offers a buying opportunity that is widely endorsed by analysts. The consensus target price indicates NKE is set to gain about 25% in the next twelve months.

The bullish sentiment can be linked to the company’s quick recovery after slipping to a quarterly loss in the early weeks of the pandemic. Interestingly, Nike navigated through the crisis effectively since then, despite being a consumer discretionary brand.

The company owes its resilient performance mainly to the direct-to-customer model that came in handy when customers stayed away from retail outlets. That, along with the efforts to enhance digital capabilities including the SNKRS app, should help it emerge stronger from the crisis. Taking advantage of the convenience and enhanced shopping experience offered by Nike’s e-commerce platform, customers purchased new sneakers during the pandemic though most of them were confined to home. 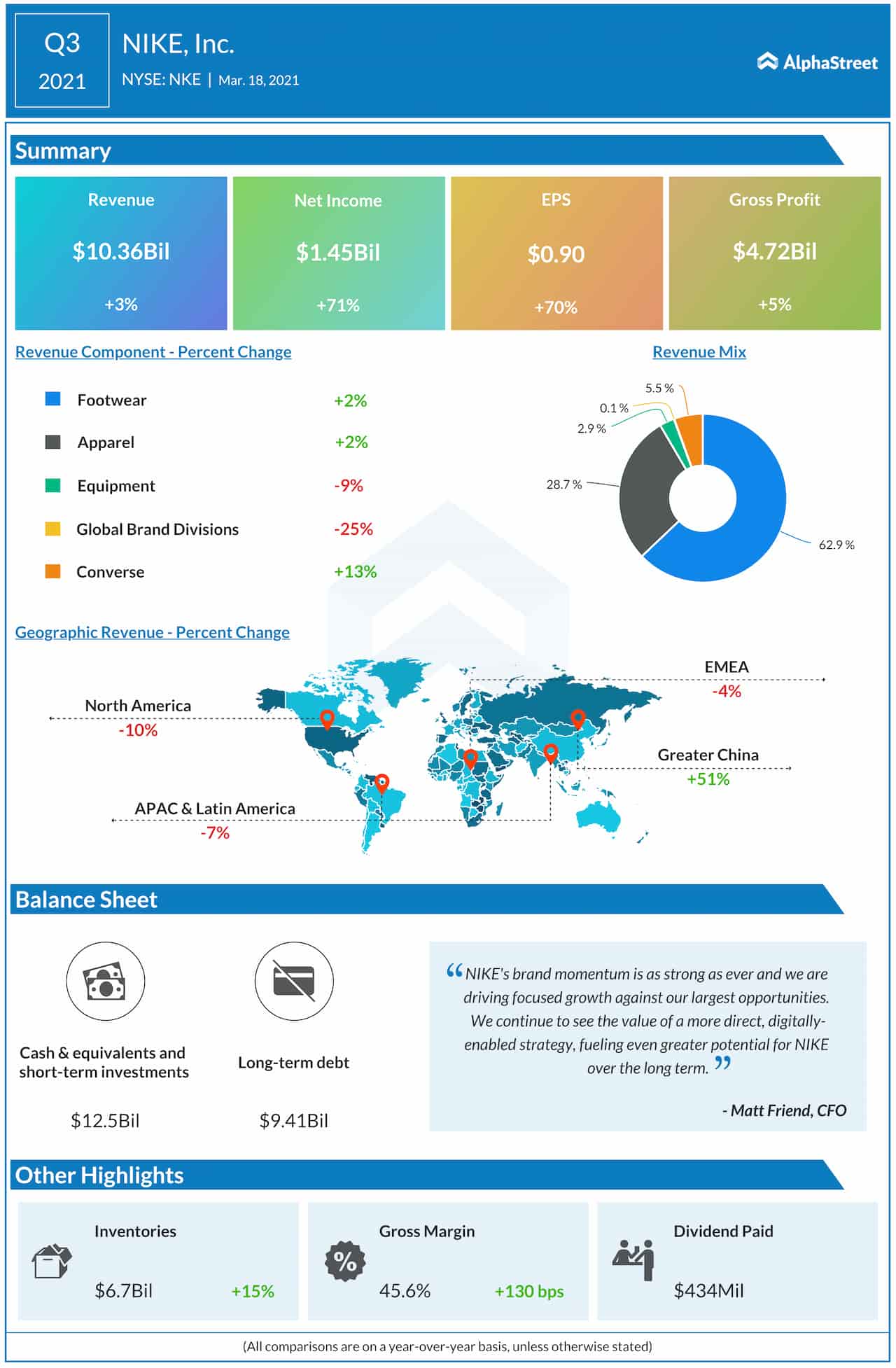 Nevertheless, uncertainty continues to loom over certain key markets including Europe, though the vaccine-driven reopening has brightened recovery hopes. Also, elevated operating costs and continued investments in technology will have a negative impact on profitability. But the strain on margins should ease in the long term when the growth initiatives start to pay off.

Operations continue to be affected by supply-chain and logistics issues, especially in North America which accounts for more than a third of total revenues. In the third quarter of 2021, revenues increased at a slower-than-expected rate of 3% to about $10 billion, with most of the growth coming from China. Meanwhile, improved margin performance lifted the bottom-line and earnings grew 70% to $0.90 per share, beating the estimates. E-commerce sales were up 59%.

During his post-earnings interaction with analysts, Nike’s CEO John Donahoe said, “our brand continues to deeply connect all over the world. We remain consumers’ number one favorite brand in all 12 of our key cities in both men’s and women’s businesses. We’re also seeing particularly strong connections in Greater China where our strong portfolio of brands including Jordan and Converse is helping to extend our leadership position. All over the world, the relationships we have with consumers cannot easily be replicated.”

Nike is slated to release its fourth-quarter results on June 24 after the closing bell. The company, which incurred a loss of $0.51 per share in the prior-year quarter, is estimated to have earned $0.50 per share in the final three months of fiscal 2021 on revenues of $11.09 billion — which is up 76%.

Nike’s shares traded slightly lower early Thursday, after closing the last session at $134.51. They have lost 5% so far this year but stayed above the 52-week average.