Zynga (ZNGA) stock rose about 5% in the extended-hours after reporting Q4 earnings results. The company reported earnings of $0.00 per share on revenue of $249 million and the results were ahead of the company’s raised guidance across key financial measures. Mobile revenue grew 12% year-over-year to $228 million and mobile bookings grew 26% to $248 million.

Zynga had guided revenue to be $243 million and diluted (loss) income per share to be $(0.00) for the fourth quarter. Bookings on a non-GAAP basis were pegged to be $260 million. 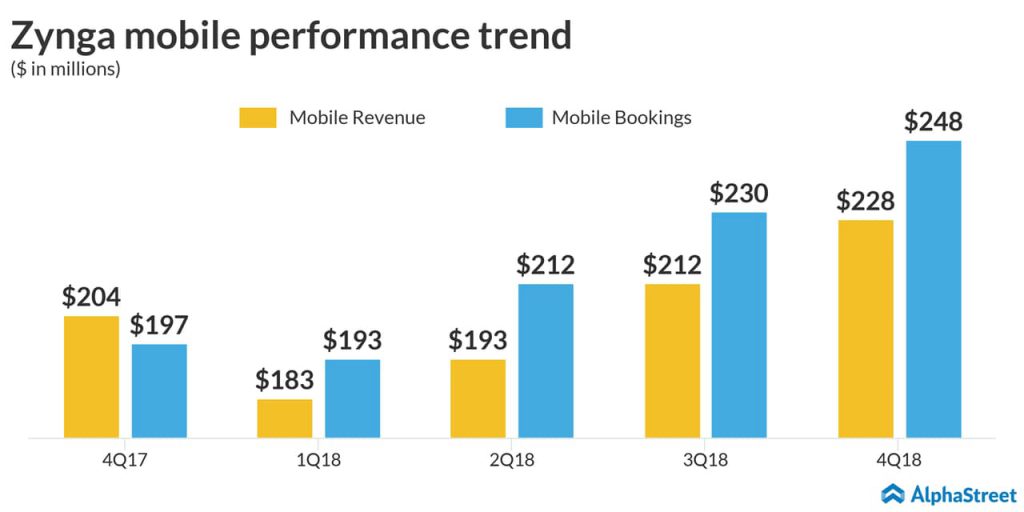 You may also like: Zynga Q4 2018 earnings conference call transcript

The San Francisco-based company expects its topline performance to be similar in Q1 and Q2, driven primarily by live services. In the second half of the year, the company expects to layer in additional growth from the new game launches as well as a seasonal lift in advertising.

For 2019, the company cautioned that it anticipates pressure in margins due to a higher mix of user pay versus advertising, as well as an increase in royalties on licensed IP.

Zynga expects low double-digit revenue and bookings growth in 2020, with greater operating leverage as live services growth in 2020 will be further enhanced by a full year contribution from 2019 new game launches.

Zynga acquired 80% of Finland-based mobile gaming company Small Giant Games in December 2018. Effective as of January 1, 2019, the company closed the acquisition of Small Giant Games for $364 million in cash and $231 million of equity. Zynga will purchase the remaining 20% of Small Giant over the next three years at valuations based on specified profitability goals.