iPhone sales recovered and grew 10% annually in the fourth quarter, but fell short of expectations

For Apple Inc. (NASDAQ: AAPL), 2022 has been a mixed year with the gadget giant experiencing a slowdown initially, followed by a rebound marked by strong sales in the latter part of the year. Though the general demand slump in the tech market and underwhelming response to the latest iPhone launch weighed on investor sentiment, Apple remains a good investment.

After peaking in January this year, Apple’s stock experienced high fluctuation with a series of ups and downs. Of late, it has been maintaining a steady uptrend. The stock witnessed one of the biggest single-day gains last week after the company reported fourth-quarter results. Analysts are almost unanimous in their buy recommendation for AAPL, citing the bullish outlook that signals double-digit gains over the next twelve months.

When it comes to the product portfolio, all key Apple gadgets performed well in recent quarters except iPad which continues to experience weakness, especially after the messy launch of the new version recently. Meanwhile, the management’s recent warning of a sales slowdown in the holiday season came as a disappointment for the company’s stakeholders.

But the tech firm’s long-term prospects look intact, given the record sales across all geographical regions in the most recent quarter. Moreover, Apple’s products are performing exceptionally well in emerging markets, like Southeast Asia, Latin America, and India. As far as market expansion is concerned, recent improvements in the semiconductor supply chain bode well for the company. 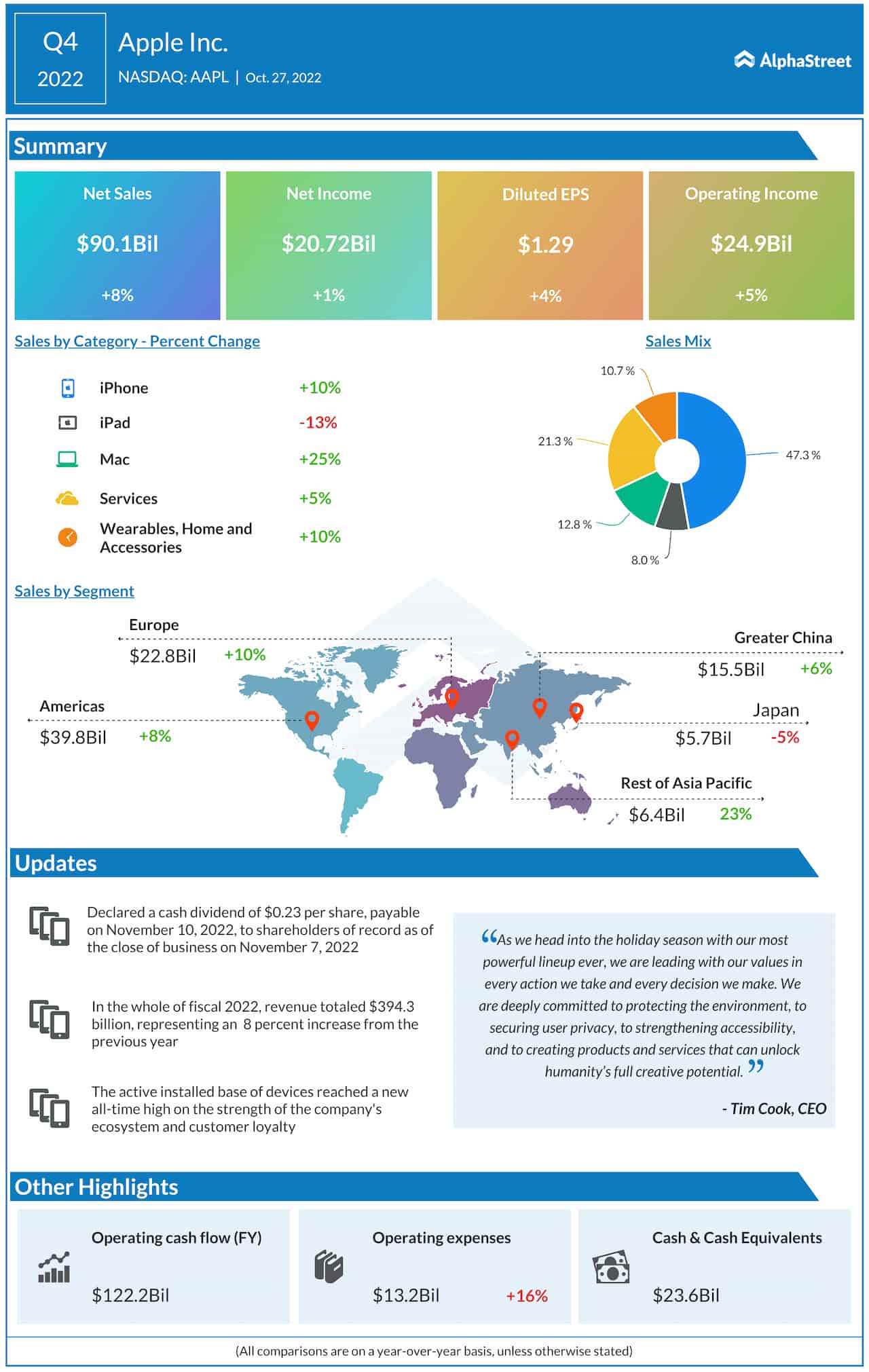 That said, the unfavorable economic environment, marked by elevated inflation and geopolitical issues, would remain a dampener in the near future. Considering the impact of those headwinds, Apple executives have warned of a sales slowdown in the final months of the year, with Mac sales declining on an annual basis and services growth decelerating.

“Overall, we believe total company year-over-year revenue performance will decelerate during the December quarter as compared to the September quarter for a number of reasons. First, we expect nearly 10 percentage points of negative year-over-year impact from foreign exchange. Second, on Mac, in addition to increasing FX headwinds, we have a very challenging comparison against last year which had the benefit of the launch and associated channel feel of our newly redesigned MacBook Pro with M1.”

Apple ended the fiscal year on a high note, reporting broad-based sales growth that drove fourth-quarter revenues to an all-time high of around $90 billion. With a 10% annual growth, iPhone sales rebounded from the slump that began at the beginning of the year, but the latest number fell short of expectations. Reflecting the strong top-line performance, September quarter earnings rose 4% to $1.29 per share. Total revenues and earnings also topped Wall Street’s expectations, as they did in the trailing quarters. During the quarter, the active installed base of devices climbed to a new all-time high.

Extending the post-earnings rally, AAPL ended the last trading session sharply higher. Over the past 30 days, the shares have gained nearly 6%.