After strong 2021, Tesla (TSLA) looks all geared up for another record year

The success of the Austin-based tech firm, which has revolutionized the electric vehicle market, can be attributed to the solid demand for its Model-3 and Model-Y passenger vehicles that accounted for 95% of total deliveries in the most recent quarter. CEO Elon Musk, who recently stirred a media buzz by making an unsolicited offer to acquire microblogging platform Twitter Inc. (NYSE: TWTR), is pursuing an ambitious goal of growing production by 50% to around one-and-half million units this year.

During his post-earnings interaction with analysts, Musk said “We’re really at the early stage of our journey. We only crossed 1 million units in the past 12 months recently, and we aspire to head to 20 million units a year, so we’re basically 5% along the way towards our goal. And we are growing very rapidly year-over-year and remain confident of exceeding 50% annual growth for the foreseeable future for basically several of the next years.”

Interestingly, Tesla’s stock has performed much better than its peers in the automotive industry as well as the Nasdaq Composite. In general, the outlook on the company is quite encouraging, mainly due to its resilience to the macro headwinds. That makes the stock a good investment, but there are concerns that it is overvalued. After the prolonged rally, it seems there isn’t much room for TSLA to grow further in the near term but it remains one of the best stocks for long-term investment.

For General Motors, 2022 could be a year of strong recovery 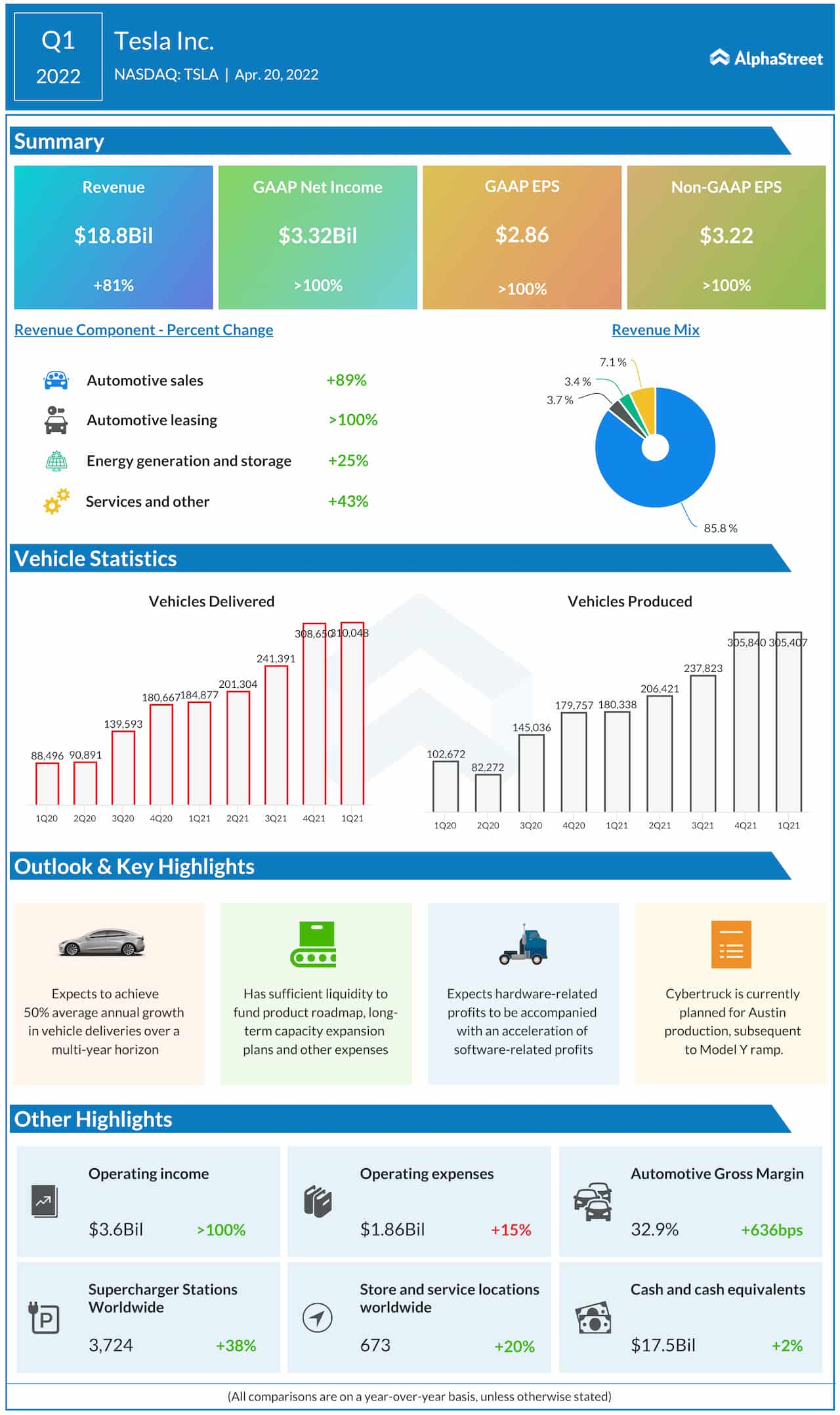 The company seems to be on track to meet its near-term growth targets but virus-related shutdowns, especially in Shanghai where COVID resurgence has caused disruption, could cause roadblocks. It goes without saying that long wait times and delays in delivery would be dampeners as far as customer sentiment is concerned. However, things would improve significantly in the second half of the year as the factory ramp at Austin and Berlin gathers pace.

While being encouraged by the impressive performance of the automotive segment, Tesla’s stakeholders would be closely tracking the company’s other ventures like full self-driving cars and Robo-taxi, which are progressing at a sluggish pace. Solar deployments dropped sharply from last year, hurt by unfavorable market conditions and short-supply of components including microprocessors.

Despite the capacity reduction, including a one-month loss of built volume in China, the company produced 305,407 units in the first quarter, which is up 69% from last year but slightly below the prior-quarter levels. Deliveries rose at a similar pace to 310,048. The results also benefited from a shift in the mix to more profitable vehicles and a one-time regulatory credit.

Revenues rose a whopping 81% to $18.8 billion in the first quarter, reflecting double-digit growth across all operating segments, with the automotive division contributing around 85% of total revenues. As a result, adjusted earnings more than doubled to $3.22 per share. Both numbers exceeded experts’ projections. The bottom line also benefitted from continued moderation in operating expenses.

Tesla’s shares made strong gains soon after the earnings announcement and breached the $1,000-mark once again, after gaining 10% in the past 30 days.