Alibaba Group (NYSE: BABA) is getting ready for its fourth-quarter earnings report at a time when relations between the US and China have hit a new low, especially after the recent escalation of the trade dispute.  When the e-commerce giant unveils the numbers on Wednesday before the opening bell, analysts will be expecting revenues to rise a whopping 50% year-over-year to $13.42 billion, benefiting from the continued growth of the online retail platform.

There will be a corresponding gain in earnings – estimated to have advanced 18% to $0.98 per share. Though earnings came in above expectations in the previous two quarters, the long-term trend indicates there is an element of uncertainty. While the overall growth is fuelled by the core commerce segment, the fast-growing cloud computing segment continues to act as a catalyst. 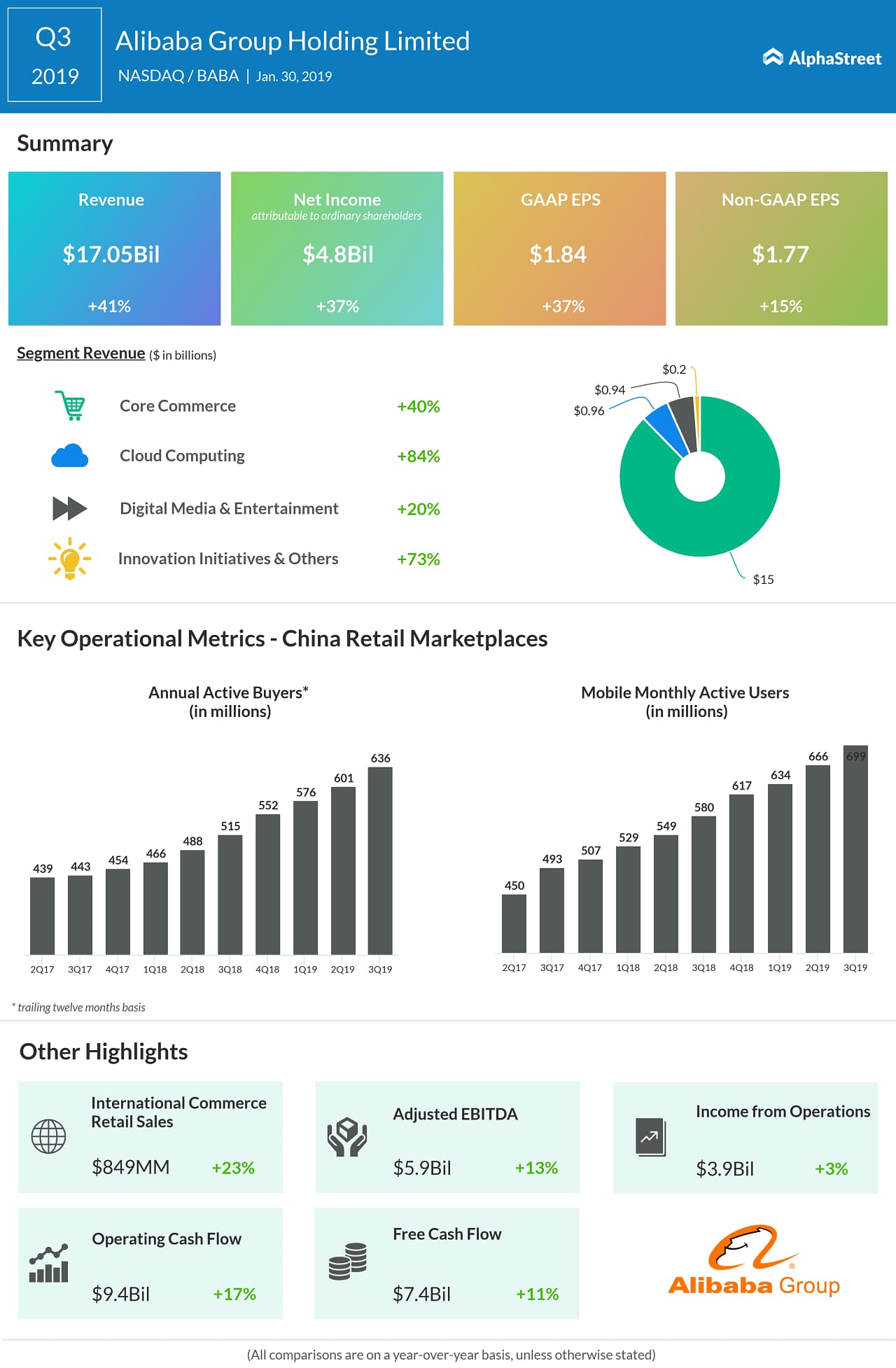 Alibaba’s mobile monthly active users have been growing steadily, reflecting the increasing popularity of mobile devices as a medium to connect to its digital platforms. Another positive factor is the stable demand for the company’s cloud services, owing to the rapid adoption of the technology among enterprises worldwide.

In a move that could facilitate the entry of overseas merchants into China’s restricted retail space, Alibaba earlier this year rolled out two key schemes named Centralized Import Procurement and Tmall Overseas Fulfillment, which is expected to have added to revenue growth in the to-be-reported quarter.

Alibaba’s Mobile Monthly Active Users has been growing steadily, reflecting the increasing popularity of mobile devices as a medium to connect to its digital platforms

On the flipside, Alibaba could be facing fresh challenges to its business in the wake of the recent escalation of the trade dispute between the US and China, which according to experts might extend to the coming years. Also, the phenomenal expansion of the core e-commerce business comes at a price. The heavy investments in technology, physical infrastructures such as retail stores and ancillary facilities are taking a toll on cash flow.

In the third quarter, the company recorded a 41% jump in revenues to $17.06 billion, on the back of strong e-commerce sales and cloud adoption. Earnings, adjusted for special items, climbed 15% to $1.77 per share.

In the Chinese retail market, which represents the lion’s share of Alibaba’s business, active customers rose by 6% to $636 million and the number of mobile monthly active users moved up to $699 million.

Alibaba’s American counterpart Amazon (AMZN) recorded double-digit revenue growth in the first quarter. Earnings more than doubled to $7.09 per share amid a broad-based increase in sales.

Like its peers in the industry, Alibaba is recovering from last year’s massive tech selloff that cost the company’s dearly in terms of market value. The shares gained 29% since the beginning of the year and are moving closer to the record highs seen a year earlier. They closed the week’s trading on a low note, ahead of the earnings report.