Amazon.com (NASDAQ: AMZN) stock price declined above 2% in the after-market trading after the company posted mixed Q2 results. The company’s earnings failed to beat estimates, while the revenue came ahead of expectations. The stock price touched a new 52-week low level of $1,307 in late December and since then has recovered about 32% in 2019 aided by solid first quarter results. 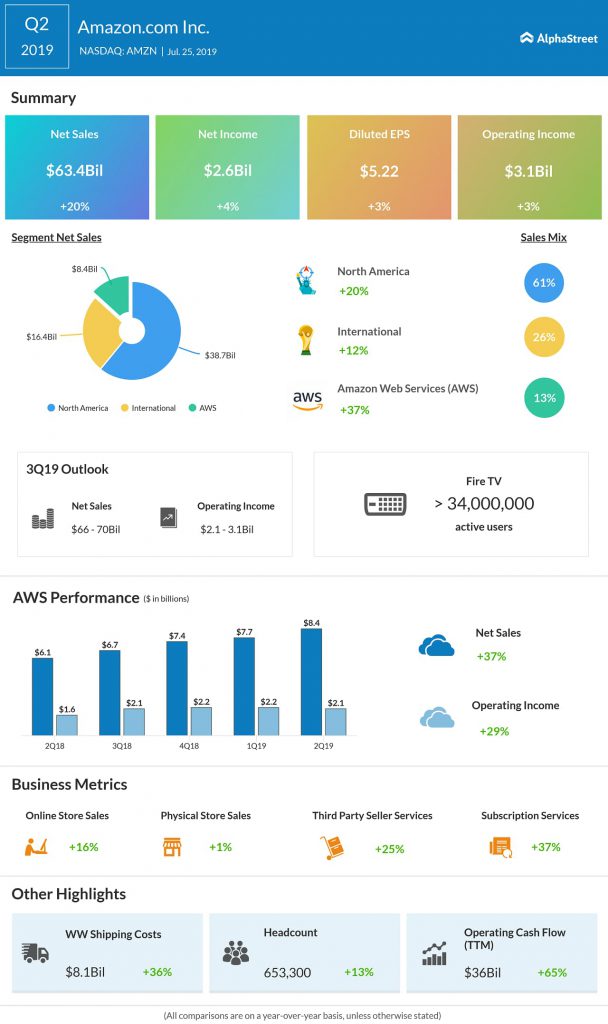 Last quarter, Amazon also said that it’s transitioning towards free one-day shipping for Prime members from the free two-day program. The company has earmarked $800 million for this initiative in the second quarter. In the Q2 period, shipping costs surged 36% to $8.13 billion.

All the three reporting divisions posted double-digit sales growth. However, Amazon Web Services (AWS) lead the pack with 37% jump in revenues. On a sequential basis, it contracted by 4%, which would need close attention in the near future.

It’s worth noting that AWS brings in lion’s share of contribution to the operating income followed by the North American segment. International division is yet to make profits as it is still in investment mode.

Advertising revenues continues to grow nicely and more importantly it’s a high-margin business similar to AWS. In the second quarter, Other category in which ad revenues are reported grew 37% to $3 billion.

When it comes to headwinds, Amazon is under the scanner of the regulators in the US and EU region for its business practices.

Amazon expects Q3 sales to be in the range of $66-70 billion and operating income to be between $2.1 billion and $3.1 billion, a marked reduction from the $3.7 billion reported in the prior year period.

The street is anticipating revenue of $67.27 billion, and adjusted EPS of $6.64 per share, up 16% from last year. It’s worth noting, Q3 performance would include the Prime Day numbers.