Shares of Canadian cannabis company Aphria Inc (NYSE:APHA) fell 8.9% during the pre-market hours on Monday after it reported a third-quarter adjusted loss of $0.15 (C$0.20) per share, much wider than the loss of 4 cents per share expected by the street. 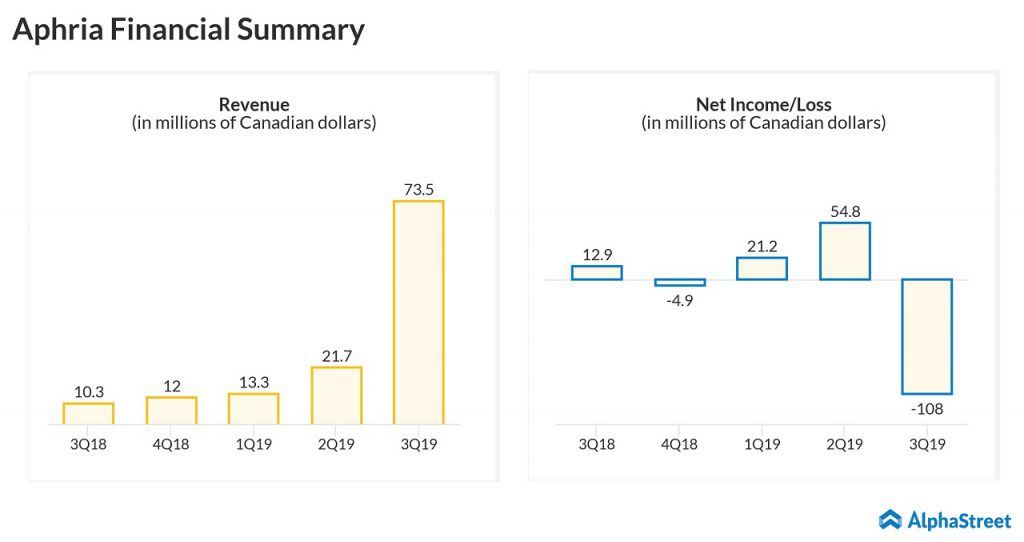 During the quarter, the company saw a decline in cannabis revenue as well as kilograms sold, primarily due to operational transition and temporary distribution challenges, the company said.

In a separate release earlier today, the Ontario-based company said it has entered into a series of transactions that will accelerate the expiry date for the take-over bid by Green Growth Brands to April 25, 2019, and will terminate the arrangements with GA Opportunities Corp. for $89 million. In December, Aphria rejected Green Growth Brands’ $2.1 billion (C$2.8 billion) buyout offer stating that the latter’s proposal undervalued the former.

Late last year, Aphria shares got hammered following a report from Hindenburg Research, which stated that Aphria’s LATAM acquisition is worthless and accused that a network of insiders of Aphria diverted funds from shareholders and put them into their own pockets.

The Canadian government has committed to regulating the sale of cannabis-infused products in 2019. Based on customer behavior and product preferences demonstrated in other existing legal markets, the Ontario, Canada-based cannabis firm believes cannabis-infused products could represent more than 50% of the total cannabis market upon becoming federally legal in Canada.

Earlier this month, Aphria’s German subsidiary received a license for the domestic cultivation of medical cannabis. Cannabis companies have started focusing on the beauty area. On April 1, Aphria launched CBD-based cosmetics product in the German market.

The stock, which started trading on the NYSE on November 2, 2018, has gained 81% since the beginning of this year.