Autodesk (NASDAQ: ADSK) stock plunged above 8% after the bell as the outlook failed to meet estimates. However, second quarter top and bottom line numbers surpassed street consensus. The software giant’s stock is down about 4% in the last 12 months as a result of the ongoing business model transition.

For the Q3 period, Autodesk is expecting sales in the range of $823-830 million and adjusted EPS of 70 to 74 cents. However, this is lower than the street estimates. Analysts are projecting revenue of $838.7 million and non-GAAP EPS of 77 cents.

When it comes to full-year results, the software firm has scaled down its outlook. It is now anticipating revenue of $3.24-3.27 billion and adjusted earnings of 2.69-2.81 per share. Analysts are projecting sales of $3.28 billion and non-GAAP earnings of 2.82 per share.

The company has blamed the tough macros and trade war as the primary reasons for the weaker outlook. However, the software firm believes these are near-term headwinds and is on track to achieve its fiscal 2023 goals. 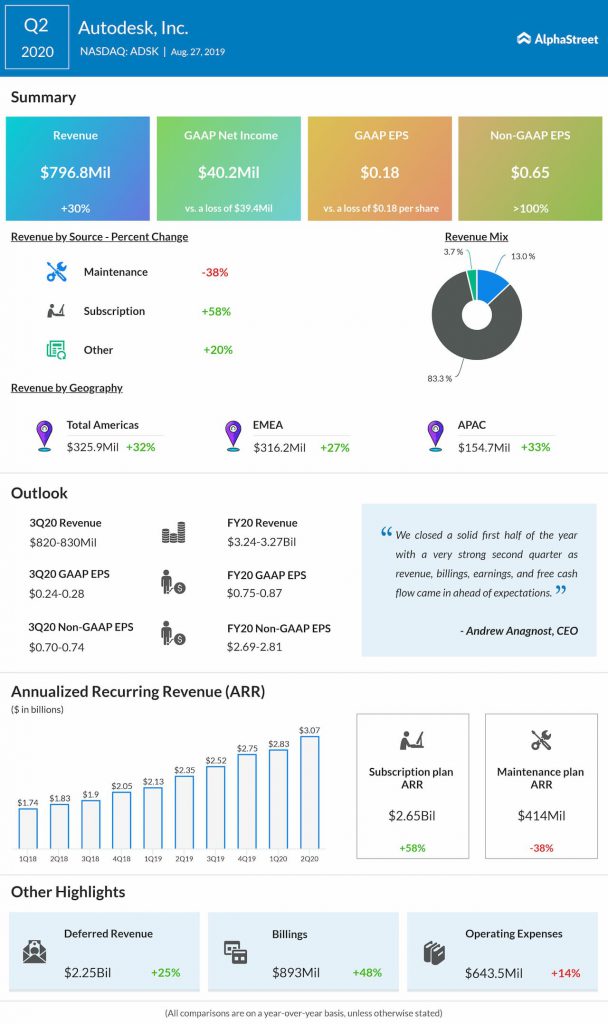 Revenue surged 30% to $797 million due to strong performance from all of its products which saw double-digit growth over prior year. Adjusted earnings jumped to 65 cents compared to 19 cents reported last year. The second quarter headline numbers came ahead of estimates.

In the Q1 period, the software firm guided revenue of $782-792 million and adjusted EPS of 59-63 cents. On the flip side, the street was anticipating top line of 787 million and non-GAAP earnings of 61 cents per share.

Read: What to expect from Marvell Q2 earnings?

Autodesk decided to transition from licensing-based business model towards software-as-a-service model in 2016. As a follow-up to the transition, the company launched maintenance-to-subscription (M2S) program in 2017, which helps its existing clients to convert from the licensing model to SaaS plan.

In the past two years, the company has converted 875,000 customers to SaaS offering and plans to move the remaining 689,000 in the near future.