BIIB Stock: Is Biogen an investment worth trying now?

In the third quarter of 2022, both revenues and earnings topped expectations

Biogen Inc. (NASDAQ: BIIB) has been going through a rough patch for some time as the company’s popular products faced competition and it struggled to come up with effective treatments for Alzheimer’s disease, an area where the biotech giant has focused its research and development activities.

Biogen’s stock has been recovering steadily since last month, after slipping to the lowest level in nearly a decade. The rebound came after advanced studies on its new Alzheimer’s drug lecanemab produced positive results. The data came as a morale booster for the company’s stakeholders, considering the recent setback from the failure of its original Alzheimer’s drug Aduhelm.

With the positive elements already factored into the valuation, BIIB is likely to grow at a relatively slow pace over the next twelve months. Since the company’s long-term prospects depend a lot on its ability to successfully launch new drugs, it would be a good idea to make investment decisions based on further developments related to lecanemab. Meanwhile, uncertainties surrounding Biogen’s portfolio and pipeline call for caution when it comes to buying the stock.

“…we continue to execute well across our core business and are pleased to be raising our financial guidance for the year. We are excited about the recent lecanemab readout and believe our diversified pipeline across neuroscience, specialized immunology, and biosimilars have the potential to return Biogen to growth over time as we continue to build a multi-franchise portfolio. As always, we remain focused on creating long-term value for our shareholders.” 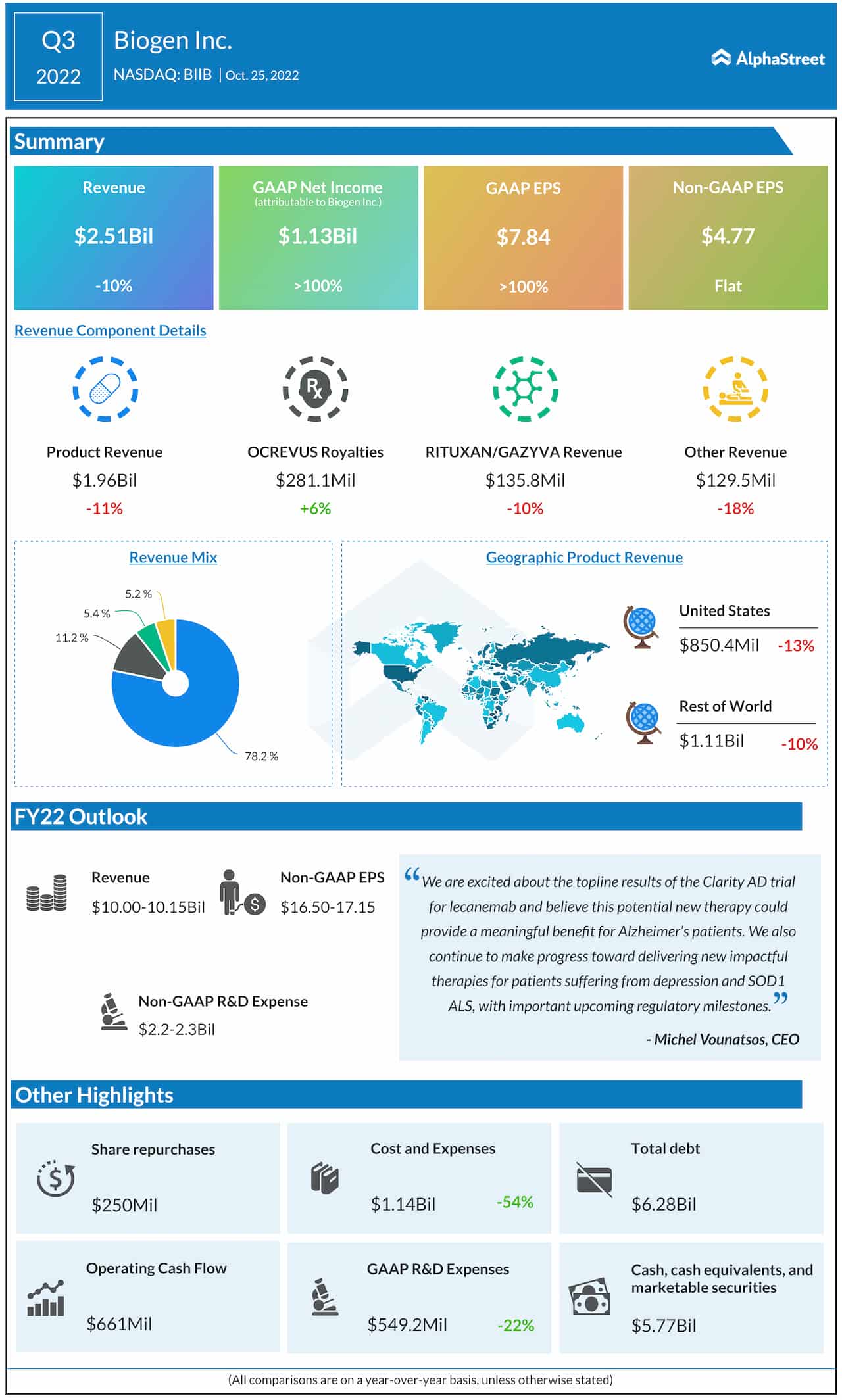 The company’s earnings beat estimates for the second time in a row after two consecutive misses, even as investor sentiment continues to fluctuate. In the September quarter, adjusted profit remained unchanged at $4.77 per share, but net profit more than doubled year-over-year to $1.13 billion or $7.84 per share. The bottom line benefited from a 54% drop in operating expenses. Meanwhile, third-quarter revenues decreased 10% to $2.51 billion, mainly reflecting an 11% fall in sales at the core Product segment. Nevertheless, both numbers exceeded estimates.

Data from a late-stage clinical trial on lecanemab showed that the medicine reduced cognitive decline in patients with mild cognitive impairment or mild Alzheimer’s disease by 27%, compared to a placebo group. The impressive outcome is expected to pave the way for the drug to obtain regulatory approval. Though the formulation has a few side effects, they are moderate compared to the earlier version.

Meanwhile, Biogen’s weakening sales underscore the need for a powerful product that can be marketed successfully, especially at a time when the company is facing generic threat to its popular multiple sclerosis treatments, including Tecfidera which is currently facing stiff competition from an array of new drugs.

After the recent gains, BIIB is currently trading above its long-term average and is close to the levels seen a year ago. The stock traded higher early Wednesday after closing the previous session lower.