Earnings Preview: Canopy Growth is where the money is

What a year it has been for the cannabis industry in America! Including the midterm events that lead to Utah and Missouri legalizing recreational marijuana, we are now just one state short of two-thirds of the US legalizing it. And one company is making the most of it — Canopy Growth.

On November 14, the medical marijuana company is expected to post its second-quarter FY2019 earnings results before the opening bell. While analysts expect Canopy Growth (CGC) to post a quarterly loss of $0.12 per share, revenue is touted to soar 82.6% to $25.6 million.

Now, across the border, history was made on Oct 17, when Canada became the first industrialized country (and the second, overall) to legalize recreational marijuana. Canopy Growth is listed majorly in the Toronto exchange under the ticker: WEED.

The industry, which opened its doors to the mainstream market just recently has been facing an issue of overwhelming demand and under-supply. This is where we look to companies such as Canopy Growth and Tilray (TLRY). The entire industry is expected to generate over a whopping $5 billion annually in added sales in the coming years.

What was once focused on production capacity and capability, has now turned to product diversification and quality. These are more drivers suggesting how the industry is quickly maturing. 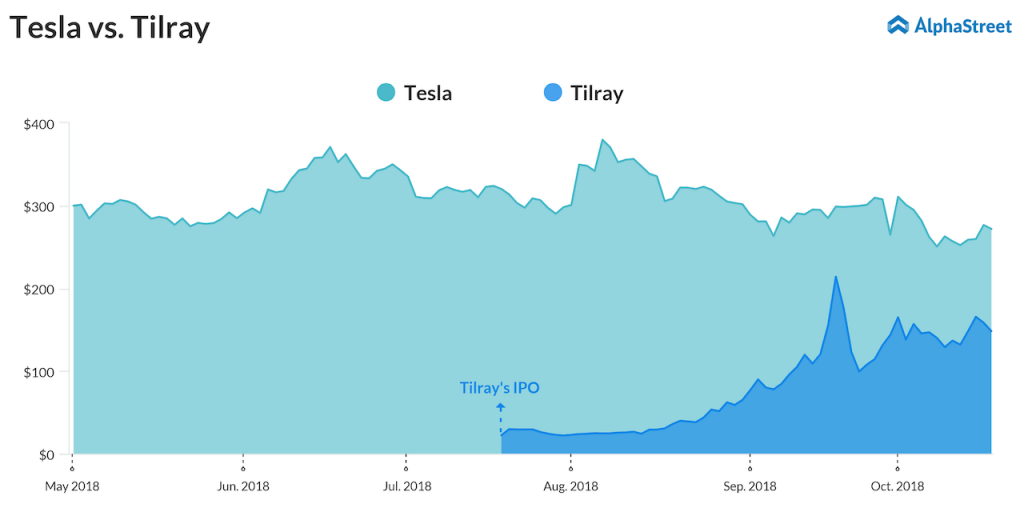 And on top of the hill was Tilray. From August price of $25 a share, Tilray skyrocketed to $300 a share in September, going on to value itself at $28 billion soon after. Whatever the case, Tilray always maintained a valuation above $10 billion.

But then came November, and a new champion — Canopy Growth. And it was months in the making.

All of this shuffling has created wild vacillations in shareholders’ expectations of pot stocks and, therefore, the share price of marijuana stocks. Closing Constellation’s $4 billion equity investment brought Canopy’s value up to $15 billion in the start of November, essentially making it the top pot stock.

Tilray, Canopy Growth could emerge winners in a year’s time

With its recent bump in cash reserves, Canopy Growth will now have to show investors how it is done. Expansions to new markets and acquisitions could be well under way, given that it lines with how Canopy Growth sees itself in the future. It recently brought Hiku Brands for $205 million which added some well-known cannabis brands to its portfolio.

The future is there for the taking, and the stock performance will depend on how Canopy Growth will line its strategy as it posts earnings for the past quarter. Investors will be on the lookout for future projections and any indication of what the pot stock champion might have in store for them.