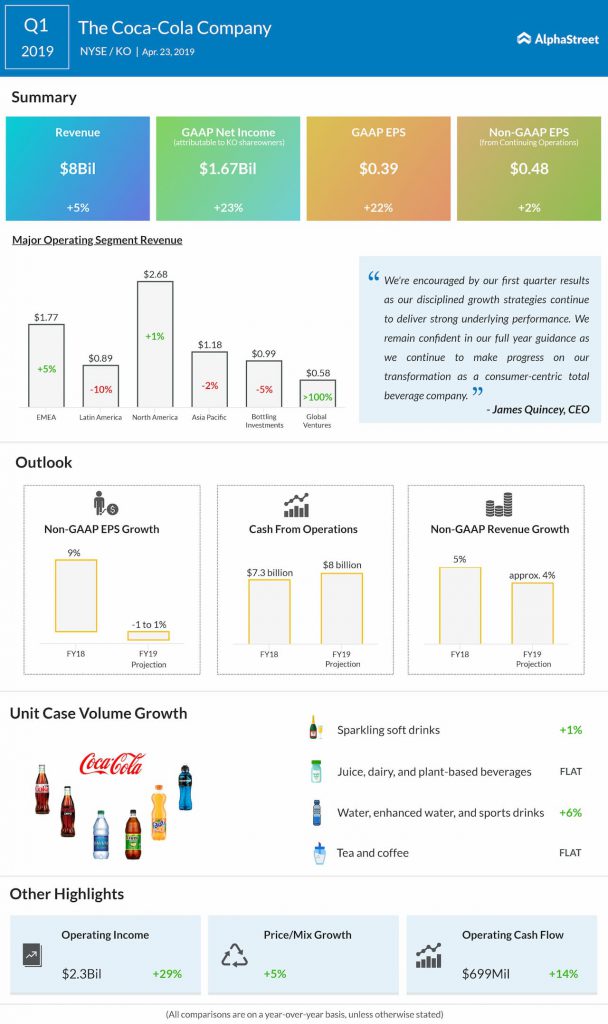 KO shares gained over 2% during pre-market trading on Tuesday. The stock has increased by 7.7% in the trailing 52 weeks.

The company had earlier this year provided a cautious yearly outlook due to weak macros. Coca-Cola’s performance has been hurt last year mainly by currency-related impacts and bottler refranchising activities. The impact from refranchising efforts would be minimal in the current fiscal year as most of it has already been completed, which would result in better margins and lower expenses.

However, demand for core soft drinks has been decreasing due to changing consumer trends.

For the fiscal 2019 period, Coca-Cola expects a 4% jump in adjusted revenues. On a non-GAAP basis, the beverage giant expects operating income on an FX-neutral basis to grow 10% to 11%. Operating cash flow is expected to come in at least $8 billion while CapEx for the year is projected to be about $2 billion.

However, the company added that EPS would be up or down 1%.

For the second quarter, the beverage giant expects non-GAAP revenues to see 6% tailwinds from acquisitions and divestitures. Meanwhile, adjusted operating income is projected to witness 7% currency headwind based on the current FX rates.

CEO James Quincey will succeed Muhtar Kent as the 14th chairman of The Coca-Cola Company on April 24. Kent is retiring after being with the beverage giant since 1978.

Coca-Cola had introduced a new segment in January called Global Ventures. This segment would report results from Costa Limited, Dogadan businesses and fees received from Monster Beverage. In Q1, price/mix grew 3% in this segment.