Cannabis giant Cronos Group (CRON) is scheduled to report fourth-quarter earnings on March 26, Tuesday, before the opening bell. Q4 results pose great significance to investors as it marks the first full quarter since Canada’s approval of the recreational use of marijuana.

During the last reported quarter, the Toronto, Canada-based firm generated revenues of CAD3.76 million, which was 186% higher than the same period last quarter. The top line was aided by strong sales growth of dried cannabis and cannabis oils. 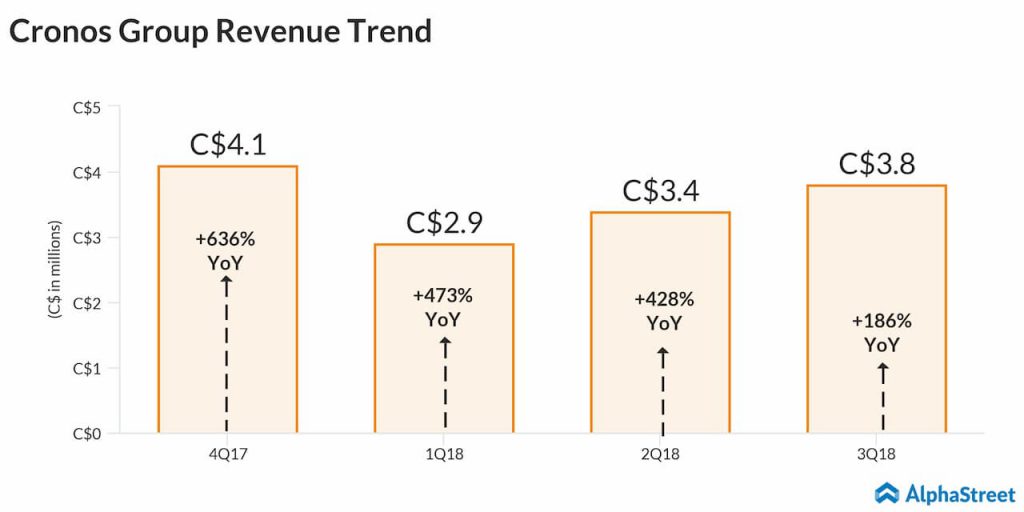 Analysts expect this trend to continue into the fourth quarter. In fact, the street consensus for the fourth quarter revenues are pegged at $6.7 million, up over 400% year-over-year. Market observers believe Cronos would stand to benefit from Canada’s decision to legalize recreational use of weed in October last year.

For the fourth quarter, analysts project a net loss of 1 cent per share, weighed down by higher marketing and publicity expenses, similar to the third quarter. In Q3, operating expenses shot up 242%, primarily due to ramping up in hiring and consulting fees paid for strategic partnerships.

Separately, investors will be interested to see how the company, which sells cannabis oil and dried cannabis, intends to use the investment it received from tobacco company Altria Group (MO). In December last year, the Philip Morris (PM)-parent said it would invest CAD 2.4 billion in Cronos Group, making its stake in the marijuana firm about 45%. Factoring in the exercise of certain warrants, the total potential ownership position of Altria would be about 55%.

During the earnings conference call, look out for any management updates on the planned capital allocation as well as the strategy it aims to adopt to work out the partnership with Altria. The partnership is likely to help Cronos in its international expansion plans, even as rival firms have taken up the path of consolidation to gain market share.

READ: THE CANNABIS BEVERAGE INDUSTRY IS SOMETHING YOU DON’T WANT TO MISS THIS YEAR

CRON shares have almost doubled since the beginning of this year. In the trailing 52 weeks, the stock has gained 157%. The stock has a 12-month average price target of $22, suggesting a 6.4% upside from the last close.