The Walt Disney Company (NYSE: DIS) surpassed analysts’ expectations on revenue and earnings for the second quarter of 2019, allowing shares to rise by 1.2% during aftermarket hours on Wednesday. 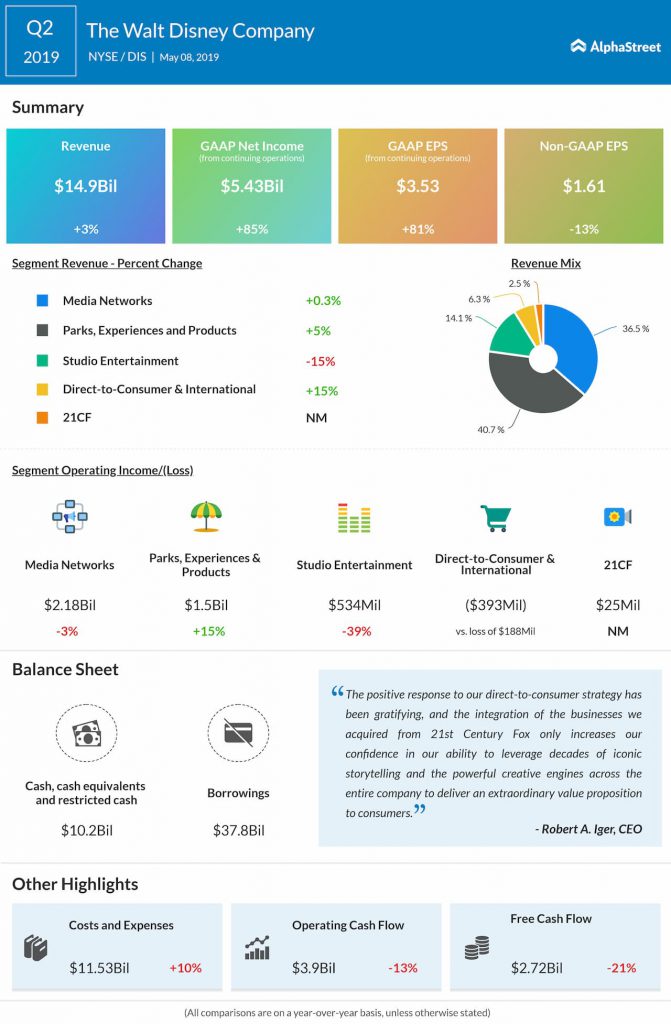 In March, Disney acquired Twenty-First Century Fox (21CF) for $71 billion. The quarterly results reflect the consolidation of 11 days of 21CF and Hulu LLC activities. Revenue for 21CF for the 11 days totaled $373 million and operating income was $25 million.

During the quarter, revenues in the Media Networks segment remained flat at $5.5 billion versus the year-ago period. Cable Networks recorded a 2% increase in both revenues and operating income. The higher operating income was driven by growth at ESPN due to higher affiliate revenue. Broadcasting revenues declined 2%.

In the Parks, Experiences and Products segment, revenues grew 5% to $6.2 billion while Direct-to-Consumer & International revenues increased 15% to $955 million.

Studio Entertainment saw a 15% drop in revenue to $2.1 billion, hurt by lower theatrical and home entertainment distribution results, as the current quarter had no releases that could match the success of Black Panther, Star Wars: The Last Jedi and Thor: Ragnarok during the prior-year quarter.

However, Avengers: Endgame saw tremendous success and is now the second-highest grossing film of all time. Disney said the latest Avengers movie will begin streaming exclusively on Disney + from December 11.