Dropbox (DBX) is scheduled to report third-quarter results on Thursday, November 8. The file hosting service, which went public in March this year, is expected to report earnings of 6 cents per share on a revenue of $352.18 million.

During the prior sequential quarter, the company’s stock had tumbled 6% during the after-market hours despite posting narrower losses on a 27% jump in revenue. The shares were hurt by the previous day’s announcement that COO Dennis Woodside was stepping down from the company. 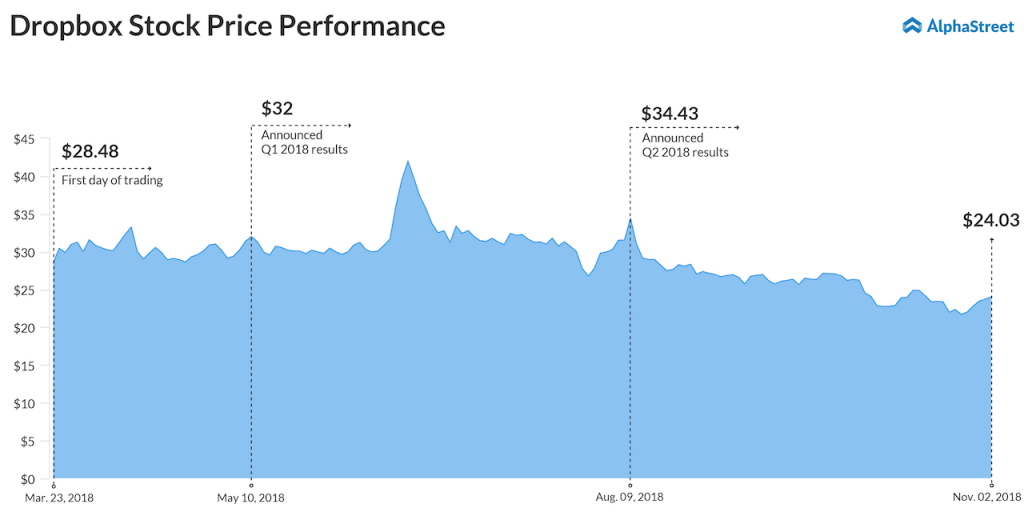 Shares of the San Francisco, California-based company has currently fallen over 15% since its first day’s closing price. The stock is almost down 18% in the past four months. Despite the unenthusiastic stock movement, analysts converge on the point that Dropbox has a lot of growth potential.

The stock has an average consensus rating of BUY on a price target of $34.57. This is at a 44% upside from Monday’s trading price of $24.03. Analysts also project that the company would report sales between $1.57 billion and $1.61 billion by next year, helped by an increase in ad revenue.

During the third quarter, market observers feel ad revenue could jump as much as 34% year-over-year. Analysts remain buoyed by the fact the Dropbox’s current user base is hooked to the service, besides the vast untapped global market yet to be explored.

The strong performance has also cut down the shorting interest in the stock by around 9%. In the retrospect, the stock has convinced analysts and short sellers that the company is in a much better state than what the stock movement suggests. There is wide optimism for a rally as it heads into the third quarter results.