Jewelry company Tiffany & Co (TIF) is scheduled to report third-quarter earnings on Wednesday, November 28. Analysts expect the company to report a decline in earnings to 76 cents per share, compared to 80 cents per share a year ago. Meanwhile, revenue is expected to grow by 7.6% to $1.05 billion.

Over the years, Tiffany is one stock that has handsomely paid its investors. The stock had soared 24% immediately following the market-beating first-quarter results in May. However, since then, a bear market in the luxury industry pulled down the stock. Yet, the stock manages to outperform the S&P 500 index with a 17% growth this year. SPX index recorded only an 8% gain during the same period.

Last year, Tiffany had announced a slew of management changes including the appointment of Alessandro Bogliolo as its CEO; posting of Reed Krakoff to the newly-created role of Chief Artistic Officer; naming of Roger Farah as the Chairman of the board; as well as the appointment of three new independent directors.

The management rejigs, which came amidst a stock sell-off that started in December 2015, is clearly working in favor of the company, with the stock getting back on track. 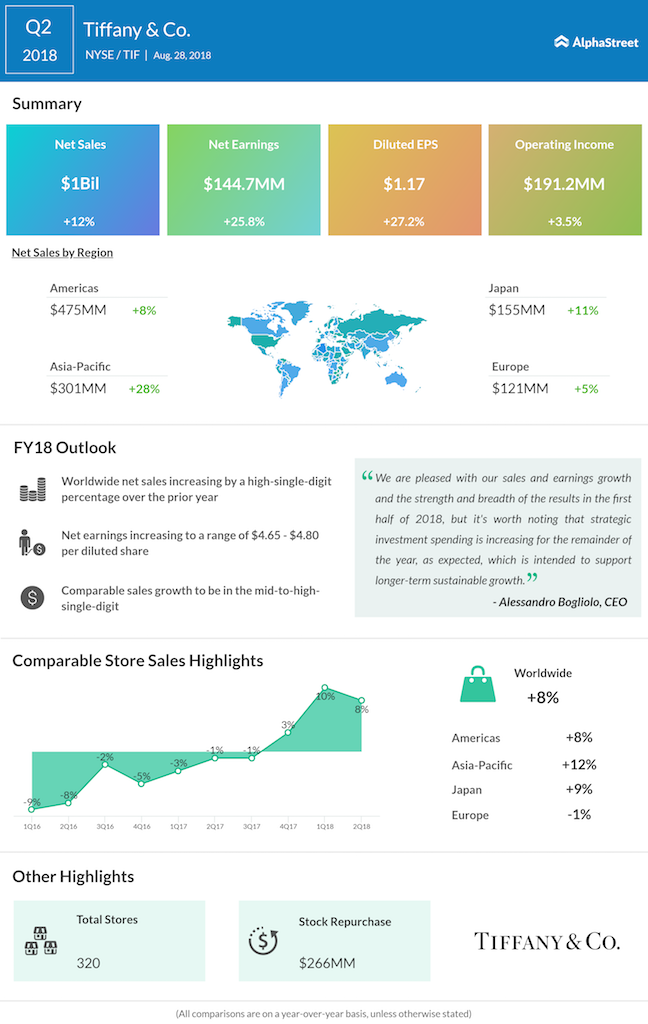 During the trailing five quarters, Tiffany surpassed analysts expectations on both the top- and bottom-line. During the prior sequential quarter, TIF shares rose 5% after the New-York based firm reported a 27% increase in earnings on a 12% increase in net sales. Comparable store sales came in at 8%, a recent record.

Tiffany also makes up for a good dividend stock with a yield of 2.15%. The company has also been consistent in raising its quarterly dividends every year, rewarding faithful shareholders.

Going into the earning, Tiffany looks set to beat the market once again with strong fundamentals, though investors should remain wary of any industry-wide bearish sentiments. Bears usually claw through Tiffany’s share price till a recovery is achieved.