Shares of the cybersecurity provider FireEye (FEYE) were down above 4% in the after-hours trading as the company’s Q2 earnings outlook fell short of estimates by 1 cent. However, first-quarter results came in line with estimates. The company also retained its outlook for the full-year on headline numbers, while increasing billings estimates by $5 million.

FireEye’s Q1 revenues improved 6% to $211 million while adjusted loss per share came in at $0.03, which met the outlook provided by the firm and the street. However, the top line reduced by $7 million sequentially. Deferred revenues rose 2.2% over the prior year period, but has decreased compared to 2.7% growth reported last year.

It’s worth noting that last year the company benefitted from a few large deals (greater than $5 million) signed in the first quarter. Despite the tough comps, sales growth in the first quarter was aided by a strong performance from the cloud and professional services lines. 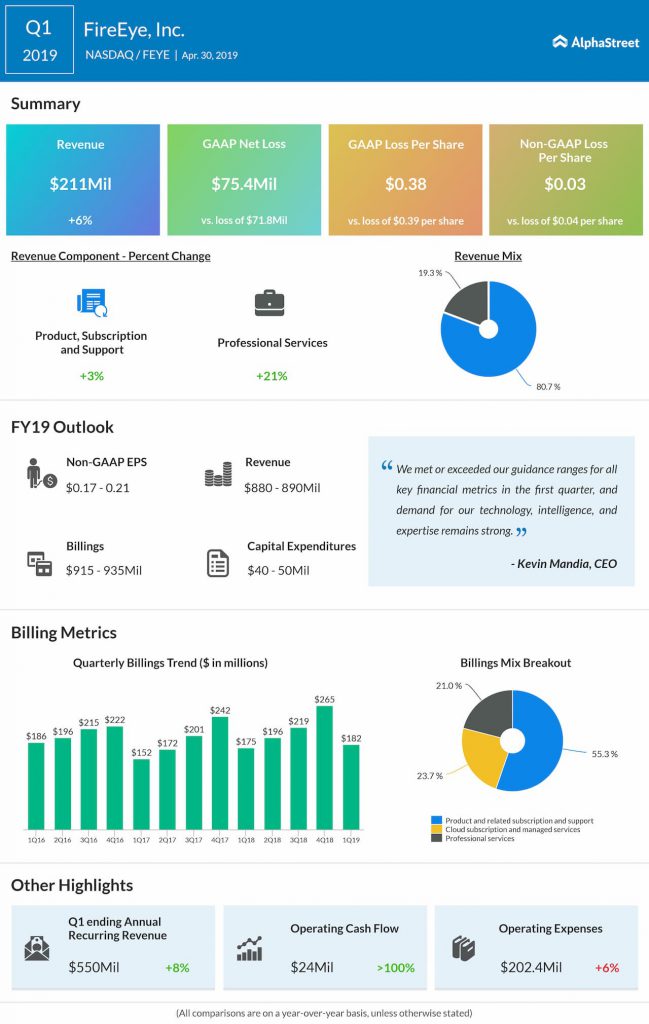 The company is in the process of transitioning from products-based model to the subscription-based model, which is expected to augur well in the long-term. The shift is expected to bring in stable revenues and improved profitability.

Billings improved 4% to $182 million coming within the outlook provided by the firm. However, sequentially this is a huge reduction of 31%. However, excluding $10 million deals signed last year, billings grew 11% continuing the double-digit growth from last quarter. The decrease in billings was primarily due to a drop in cloud-based billings offset by an increase in product and professional services.

FireEye added 237 new customers in the quarter including 33 clients signing deals more than $1 million. However, this is a huge drop from last quarter where the company added 354 clients with 60 of them were $1 million clients. This is a concern for investors as the company is facing tough competition from its peers on winning new clients despite the shift in the business model.

The cybersecurity provider expects second-quarter revenue to be between $212-216 million and adjusted EPS in the range of $0.01 and $0.03. Billings is expected to come in at $205 million to $220 million. Analysts are expecting revenues of $216 million and earnings of $0.04 per share. The high-end of the earnings guidance range provided by the firm is 1 cent lesser than the street expectations.

FireEye retained the outlook provided last quarter for the top and bottom line. Sales is anticipated to come at $880 million to 890 million, while Non-GAAP earnings expected at $0.17-0.21 per share. The company increased billings guidance to $915-935 million compared to prior guidance of $910-930 million. The street is expecting EPS of $0.19 on revenues of $886.25 million for the fiscal year.