General Electric (GE) shares jumped over 6% during premarket trading on Tuesday after the embattled manufacturing giant reported first-quarter revenue of $27.3 billion, down 2% year-over-year, but higher than analysts’ projection of $26.92 billion.

The top line was lifted by strong performance in the Aviation segment, which grew 12%. The power segment, meanwhile, saw its revenue plunge 22% during the quarter. 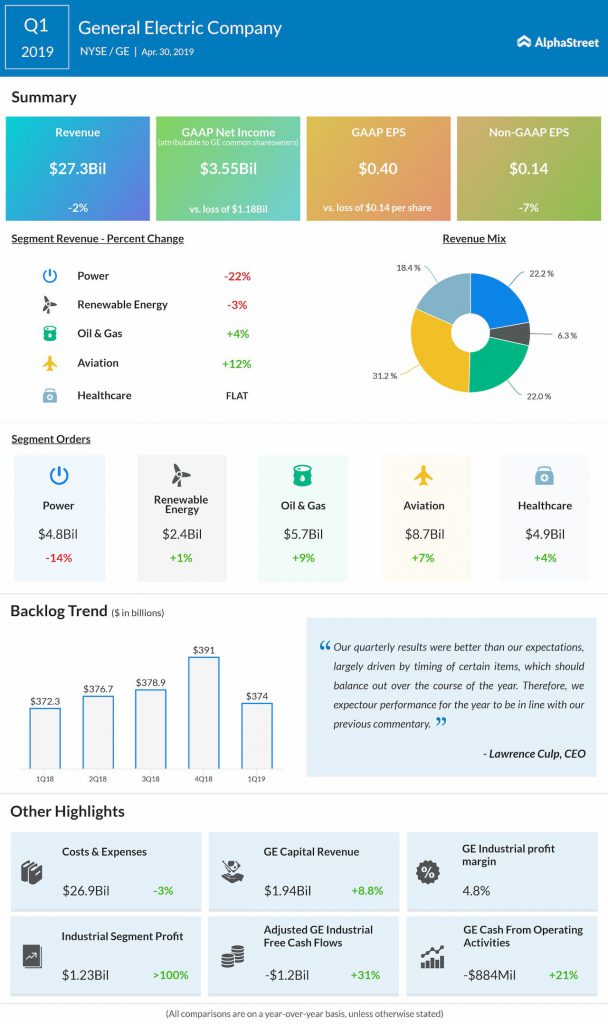 General Electric (NYSE: GE) stock has shown some recovery this year increasing 26%, compared to the 50% plunge it saw in 2018. The industrial giant has been working hard on a turnaround to retain its mojo by selling off non-core assets and trying to pare down its debt and improve cash flows.

CEO Larry Culp said, ““I am encouraged by the improvements we are making inside GE. This is one quarter in what will be a multi-year transformation, and 2019 remains a reset year for us.”

Last month, the industrial giant provided 2019 outlook, which sees GE Industrial returning to positive free cash flow (FCF) only in 2020 and improving in 2021. The company also added that for the current fiscal adjusted free cash flow for GE Industrial to be between negative $2 billion to zero.

Earlier this month, antitrust regulators in the EU slapped a $58 million fine on GE for providing misleading information to the regulator a couple of years ago when the company acquired LM Wind, a rotor blade manufacturer based in Denmark. This adds to the woes of the already beleaguered firm, which has been fighting multiple battles to restore confidence among shareholders.