GoPro’s (NASDAQ: GPRO) stock is down above 4% as the second quarter results fell short of street estimates. The company’s share price has increased 25% this year aided by better first quarter results. However, it’s still a far cry from the IPO debut price of $24 in 2014.

GoPro revenue rose 3% to $292 million, which fell short of $302.2 million expected by the street. However, the top line metrics was in line with the prior guidance provided by the firm of $285-305 million. Adjusted EPS was 3 cents per share, 1 cent lesser than the consensus expectations. The company’s prior guidance was in the range of $0.00-0.06. 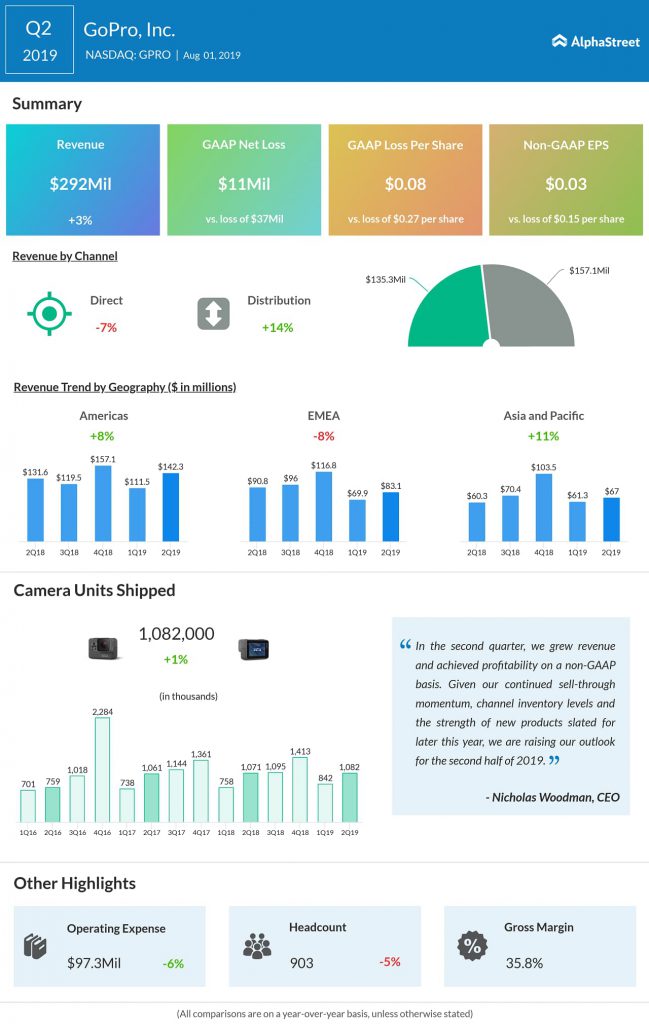 The company shipped 1.08 million camera units, up 1% over prior year period. According to NPD Group, in the US, HERO7 Black is the number one selling camera by volume. HERO7 line plus its spherical camera and Fusion were the top-four selling cameras in action camera category.

On the full-year outlook, the camera maker is anticipating top line to grow at 7-10% compared to 9.4% growth estimated by the street. Adjusted earnings is expected in the range of 25-45 cents per share by the firm whereas analysts are forecasting 38 cents per share for the fiscal 2019 period.

Commenting on the Q2 performance CEO Nick Woodman stated, “Given our continued sell-through momentum, channel inventory levels and the strength of new products slated for later this year, we are raising our outlook for the second half of 2019.”

GoPro has restructured itself to focus on the core action camera business. It has also introduced a new subscription based service called GoPro Plus which costs $5 per month to its users. As of July 31, Plus subscribers surpassed 252,000, up 50% over last year and surged 15% over first quarter.

On an adjusted basis, gross margins came in at 35.8% compared to 30.8% in the prior year quarter. The improvement in margins was aided by reduction in operating expenses. Non-GAAP operating expenses decreased 6.7% primarily from the sales and marketing front.

The company needs to make sure its core products and new launches are attuned to customer expectations, without compromising on the profitability. Even though the Fusion 360 and HERO7 cameras are doing well in the market, it is facing tough competition from its peers launching products at lower price points, which puts pressure on margins.

GoPro is trying hard to retain its mojo to build a profitable and sustainable business. With increased competition and its track record, it’s not going to be an easy ride for the camera maker.